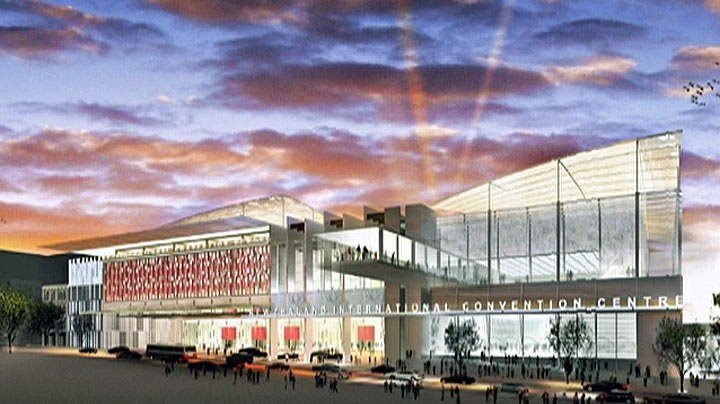 The Government looks likely to reject any proposal from Sky City to provide additional funding for the New Zealand  Convention Centre  which Sky City has agreed to build in Auckland for $402 million.

Sources close to senior Cabinet Ministers tonight say the extent of the public backlash against Sky’s proposal for more funding plus the company’s half yearly profit announcement today of $66.6 million are powerful arguments against any further funding.

The right wing Taxpayers’ Union today launched a petition to oppose any funding and the National Party’s pollster, David Farrar, has been opposing funding on his “Kiwiblog”.

Meanwhile tensions within the Cabinet over the funding proposal emerged today.

Just one day after the Prime Minister wouldn’t rule out giving taxpayers money to Sky City Casino to help fund the Auckland Convention Centre the Finance Minister said that would be the least preferred option.

But he was not involved on those discussions and had only a general discussion about the issue with the Prime Minister and Mr Joyce. Mr English was facing a barrage of questions from Oppositions MPs, Grant Robertson, Winston Peters and Russel Norman about the Convention Centre at the Select Committee.

Mr English said those discussions had not gone beyond anything that wasn’t already in the public arena.

There was no formal proposition before the Government for funding for the Casino but if one did eventuate it would be placed in the forthcoming Budget round.

Treasury Deputy Chief Executive, Vicky Robnertson, said the department’s advice about the Casino deal had not changed since 2013.

Under the deal done between the Government and Sky City that year it agreed to build the $402 million convention centre in return for an extension of its gaming licence from 20121 to 2048 and permission for 230 extra slot machines and up to 52 additional gaming tables.

The contract gave responsibility for the design to Sky City but required that the Government approve each stage of the design process.

Treasury was never convinced by the cost benefit analysis of the Convection Centre and doubted that it would attract significantly more international conferences.

It was also concerned by the possible social costs that additional gambling tables and machines might create and stressed throughout its advice to the Government the need for the Crown not to incur any costs on the Centre.

Ironically Mr Joyce’s own Ministry, the Ministry of Economic Development (as it was then called) in 2012 warned of the danger that construction costs could balloon out and that could lead to an incomplete Convention Centre needing to be complete using Government funds.

The Ministry said it was mitigating this risk by ensuring the design and construction parameters were reviewed for their practicality and that the project contract ensure that the liability for completion lay with Sky City.

The Government though it has approved a concept plan has yet to approve the Centre final design and Sky City Chief Executive Nigel Morrison said last December that the cost of that had now jumped to between $470 and $530 million.

Economic Development Minister Steven Joyce said he expected the cost difference to be bridged through cost-cutting and in the procurement process, though he would consider other funding options if needed.

“Any such options would not involve granting Sky City more or different gambling concessions, or making further changes to any legislation that affects casinos or gambling,” Joyce said.

Prime Minister John Key this week said that Sky City had moved its design beyond what the Government had approved.

“But the escalation in prices to build the convention centre, which is bigger than was proposed and is flasher than what was proposed, means there’s a hole,” he said.

One option was to tell Sky City to build it at the price and conditions agreed, but it would be “smaller and less attractive”

The second option was to see if there was any way to fill that “hole” and assess how much cash was needed.

“Obviously we would like to get on with it as soon as possible,” Key said.

It was an important part of tourism and business tourism and attracting people to New Zealand.

Mr Key was keen to see the best convention centre for Auckland because it was a long term plan.

“I would hate to see some sort of eyesore constructed downtown,” he said.

By emphasising his non-involvement in the talks with Sky City so far and making his opposition to the use of taxpayer funding for the casino clear, Mr English, has raised the question of whether there is some tension between him and Mr Joyce and the prime Minister over this issue.

Plainly that’s what the Opposition MPs sensed this morning which explains why they devoted almost all of their question time to the Casino at the Committee which was supposed to be discussing the Budget Policy Statement to the Casino.

And perhaps predictably not one of the National MPs present asked any questions at all.

Green Co-Leader Metiria Turei today released documents obtained obtained under the official Informaiton Act showing Sky City reneged on a deal to use TVNZ land it acquired only for the Convention Centre.

Advice to Ministers obtained by the Green Party shows Ministers were warned in January 2014 that SkyCity’s new plan to use the former TVNZ land for a  five star hotel made it much more valuable to the casino, and the deal needed to be recalculated as a result.

Ms Turei says there is no evidence ministers heeded this advice.

“This follows answers to written questions from Economic Development Minister last year in which he said the deal with SkyCity “prevents the (TVNZ)  land being used for any other purpose than as a convention centre” unless the Government agreed to remove a ‘restricted covenant’ over the use of that land,” she said.

“Not only was it completely untrue that the land was needed for the convention centre at all, but the Government mysteriously removed a “restricted covenant” on the land allowing SkyCity to use it for its hotel, making the entire deal even more valuable to the casino.

“After lobbying the Government for three years with the message that the TVNZ site was essential for the convention centre, within three months of purchasing the land in September 203, SkyCity had decided to put a hotel on it instead.

“Officials were clearly concerned about this, and warned Ministers to go back and recalculate the “value proposition” in the deal to SkyCity.

“John Key and his fellow master negotiator Steven Joyce have some serious questions to answer about why they  ignored official advice, and in so doing gave SkyCity even more bargaining chips in this deal, along with a prime piece of Auckland real estate that it gets to keep for its hotel, regardless of whether a convention centre is ever built,” Mrs Turei said.