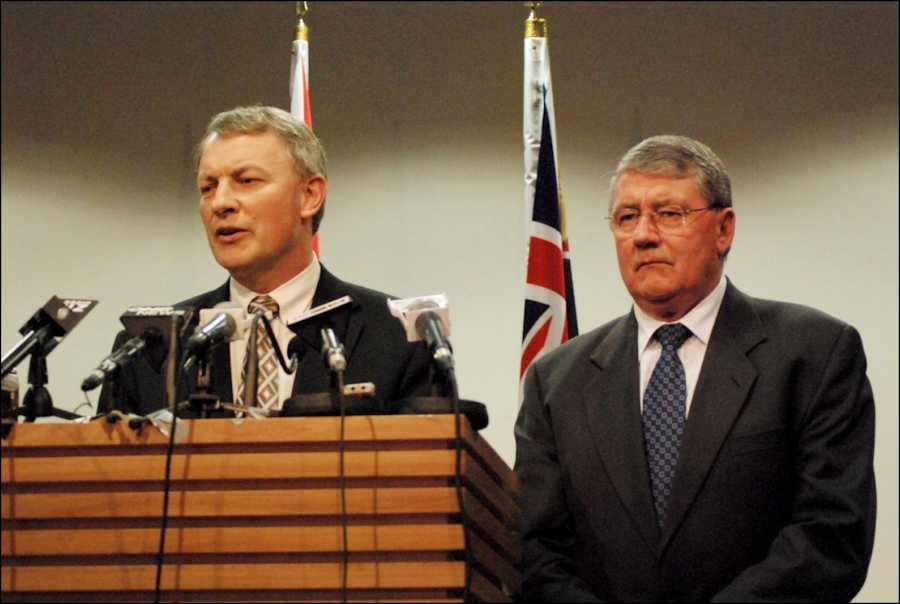 The main Minister involved in the Clark Government’s banning of the live sheep trade to Saudi Arabia says that Government never received any advice of any legal action against it by Hamood Khalaf.

Prime Minister John Key told Parliament that in 2007 Labour was looking to take its own actions to deal with the situation surrounding Mr Khalaf.

It is Mr Khalaf’s company that has received the controversial $4 million “facilitation” payment authorised by Foreign Minister Murray McCully. His company exported live sheep for the haj from New Zealand to Saudi Arabia from 1988 till the first export ban was imposed in 2003.

That ban was reimposed by Mr Anderton, who was Agriculture Minister in 2007.

Mr McCully claims that as a result of that Mr Khalaf launched a legal action for up to $30 million which the Government ended by making a $4 million facilitation payment to him in 2013  to allow the development of a farm in Saudi Arabia to breed sheep for the haj. The original breeding stock were to come from New Zealand.

But Jim Anderton told POLITIK he never even met Mr Khalaf either before or after he had renewed the export ban in 2007.

He said the Government had a strict process for dealing with legal actions against it which involved a regular report to Cabinet from the Crown Law office.

They had received no report on any action by Mr Khalaf.

This contrasts with a statement by the Prime Minister, John Key, during Question Time in Parliament on Wednesday.

He claimed that the Clark Government in 2007 was aware of the problem (with Mr Khalaf) and “it was looking to take its own actions”.

Mr Anderton said he has now checked his own papers and said that though he never met him he knew that Mr Khalaf was “grumpy” about the export ban — “but there were other farmers that were grumpy too.”

However in the end the whole industry more or less unanimously agreed that it was a good idea to cut it off.

At the time New Zealand was chairing the an Animal Welfare Committee attached to the World Organisation for Animal Health which was putting pressure on New Zealand to end the export of live sheep.

“We were at great risk in some of our key markets,” he said.

As to any question of any legal action from anyone over the renewal of the export ban in 2007, Mr Anderton said: “No question, not a suggestion of it.”

In an attempt to counter Mr Key’s allegations Labour MP David Parker tried on Thursday to table in Parliament two Cabinet documents from August and October 2007 dealing with Mr Anderton’s  renewal of the ban.

But Mr Parker ran into a Cabinet Manual direction that says former Ministers who want to release their old papers can do so only with Cabinet Office approval given under the Official Information Act.

Clearly referring to Mr Key’s statements in the House on Wednesday he said that the difficulty the Opposition had was that “we were attacked with these papers and we have not got the right to release them.

“I would like them to be released; I do not think there is any public interest that is served by their not being released,” he said.

“Former Trade Minister in the Clark Government, Phil Goff, his name and the name of the Hon Jim Anderton appear on them. Both of us are happy for these papers  to be released in full without deletions.”

The acting Leader of the House, Simon Bridges, appeared to offer a way out to the Opposition. “We would certainly be happy as the Government to see the Opposition seek to expedite the proper process on this so that the papers, in a proper way, can be released,” he said.

“But I do not think that it is for this place to be doing that when there is a Cabinet Manual with rules that do need to be followed through.

“But they could, and we could, foreseeably, be seeing that in the next day or two in terms of the process outside of this place.”

Clearly given the certainty of both Mr Anderton and Mr Goff – who have both seen the papers — there is little likelihood of any reference to any action by Mr Khalaf in them.

That is a potential political embarrassment for the Prime Minister.

However there is some evidence that Mr Khalaf was frustrated with the New Zealand position at the end of 2007 and believed he had been given encouragement to begin preparations to resume shipments then.

He claimed this in a speech to the Riyadh Chamber of Commerce during the visit of a New Zealand Trade delegation led by the Prime Minister in 2009.

A translation of that speech reports that he also raised the question of the Free Trade Agreement between New Zealand the Gulf states.

Referring to the re-imposition of the ban by the National Government in 2010 he said: “What are the benefits in the Kingdom of Saudi Arabia having discussions with you?

“Is this an indication of a good starting point for FTA discussions between our countries?”

But those discussions were already over when he made his speech. They had concluded in 2009.

But what we do know is that though the discussions had concluded the Agreement has never been signed — allegedly because of influence that Mr Khalaf has been able to bring to bear on the Saudi Arabian Monarchy.

What this whole affair is now boiling down to is these questions:

Mr Anderton says that “these guys” have been fast and loose with their off the cuff comments.

“They’re putting people’s reputations on the line and I value mine,” he said.

“I’m buggared if I’m going to let them get away with it.”

MICHELLE BOAG HAS BEEN DRAWN INTO McCULLY SAUDI ARABIAN ROW