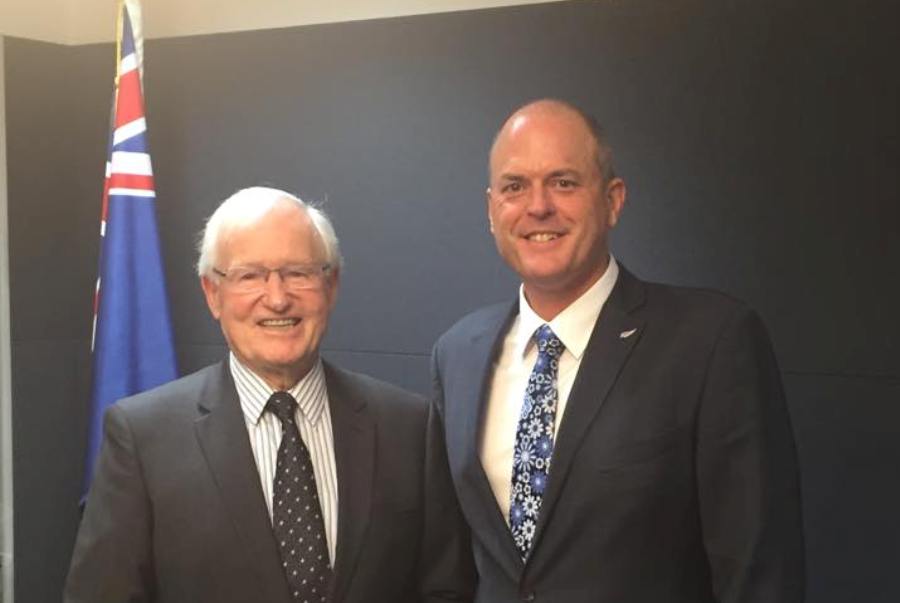 In 1990, fresh out of the presidency of Waikato University’s students’ association, and a high profile career in Young Nationals, Todd Muller, joined Jim Bolger’s office in the Beehive.

It was a rude cold bath in the reality of politics.

Muller had a ring side seat as the Bolger Government feuded and split its way to defeat in 1999.

At the heart of its divisions were intransigent positions taken by its right wing led by Ruth Richardson and its left, led by Michael Laws and Winston Peters.

Talk to Bill English or any other veteran of that Government and it is clear that it has left deep scars.

And though Muller went onto a highly successful career in agri-business, it is the lessons he learned as a young observer in the Bolger office which now seem to be behind much of his thinking since he won the Bay of Plenty seat at the last election.

But though he would seem to have the perfect CV for a rural National seat, Bay of Plenty is now an urban seat.

In effect he’s the second MP for Tauranga alongside Simon Bridges.

Consequently he finds himself at the centre of one of the most vibrant parts of the New Zealand economy.

Once the country’s retirement capital, Tauranga has become infused with younger people moving there for the lifestyle and the opportunity to establish often high tech export oriented businesses.

Boosted by the country’s largest export port and its prosperous agricultural and forestry hinterland, his electorate is booming.

He grew up near Tauranga, went to school at Tauranga Boys College, and he likes what he sees there now.

In fact his whole political philosophy has it base in his home town.

“It’s about providing the conditions for people that I look around and see here in Tauranga to be successful,” he says.

He says that a big factor in this has been the Government’s consistent fiscal management at the same time as it has been focussed on getting greater performance from social services.

That’s an important issue in Tauranga with its high retired population and their reliance ion health services, which Muller says, has seen the local hospital increase the number of operations it has delivered year on year.

“But t I think above all it’s about a Government being able to create a consistency of approach that makes people feel comfortable and assured that the people who are managing the Government are competent and that they are going to provide a platform here for people to invest their capital, invest their time in a way that is going to be successful.”

In a way he’s a classic conservative but that belies his cheerful willingness to enthusiastically embrace life as it presents itself to him.

What he is not though, is a hard-line doctrinaire ideologue.

He saw enough of that approach to politics in the 1990s.

“I think the great disappointment looking back at that period was the break in trust that occurred between a lot of the electorate  and the National Party and John Key and Bill English have worked incredibly hard to build that back.”

Muller is a Catholic, like Bill English, who he unashamedly admires.

“He was closely involved in the last National Government from 1990 and he saw firsthand some of the challenges that you face if you are entirely ideological in your application and you don’t think deeply enough around how to bring broader stakeholders with you.

“Though you might win the debate at an ideological level, you lose it on the ground.

“The people who are ultimately tasked with having to drive through reform are people who live in communities and if they are not convinced to see the merit in your proposals, you lose the battle.”

It’s an issue he must confront on a practical basis as he deals with Housing New Zealand tenants anxious about their futures as their houses are up for sale because Tauranga has been chosen as one of two cities to pilot the selling of state houses.

He says the most common question from tenants is how they are going to be protected through the transition.

He finds that when he explains the process he gets a good reception.

“But I think the communications from the Ministry of Social Development and Housing New Zealand could be stepped up.”

Taking a step back from his electorate and looking at the political year generally he selects an unusual issue for an urban MP as a big one for the year —- water.

Here he draws on his Fonterra experience.

“The old first in, first served model of water allocation is just not sufficiently robust enough to deal particularly with areas that have water to allocate and those that are over-allocated.”

But there’s another dimension to the issue that could be particularly sensitive in Tauranga which has had its share of Maori-Pakeha confrontations in the past.

“I’m very comfortable with the direction of travel as I see it where we are suggesting that local councils invite iwi to participate in the process much earlier than hitherto has been the case.

“But invariably there will be quite a degree of sensitivity around what that actually means.

“I think a model where iwi are required to be part of that conversation, over time I think people will have confidence in that.

“As long as iwi involvement doesn’t evolve to a point where it is a right of veto or it becomes a leverage opportunity for iwi commercial interests to have primacy over the others in the community.

“This where this whole thing gets tough.

“Getting everyone around the table talking about issues with respect to water access and impact is the right thing.

“But when that ultimately means that some of your historic rights might need to be adjusted then that’s when it gets tough.”

He would have liked to see more done with RMA reform — and he is on the Local Government and Environment Select Committee which will consider the legislation — but he thinks that what has been proposed so far is not the end of the story. He can see further changes down the track.

And he is a strong supporter of the TPP.  Like his friend, Chris Bishop, he sees it has a dividing line between National and other parties.

“Being connected with the world is what ultimately New Zealanders will expect for themselves and their hopes for their children,” he says.

But he is worried about housing affordability and thinks there’s room for a “measured” debate about it and what the policy response should be.

But though he can see that foreign buyer shave pout pressure on the housing market in Auckland and therefore indirectly on Tauranga, he believes we should not close ourselves off to the world.

“Even if it means a housing boom in Auckland but so long as you can demonstrate that you are taking it seriously and putting as many sensible interventions in place to try and keep the pressure as managed as possible.”

It is this measured, reasonable approach to issues plus his own CV and personality that have persuaded National Party commentators like David Farrar that Muller could be a future Prime Minister.

But that’s for the future.

The most he will admit now is that he would like to part of the inner Cabinet of a future National Government.

Based on his performance so far, and the widespread favourable impression he has made, that may not be an unreasonable ambition.