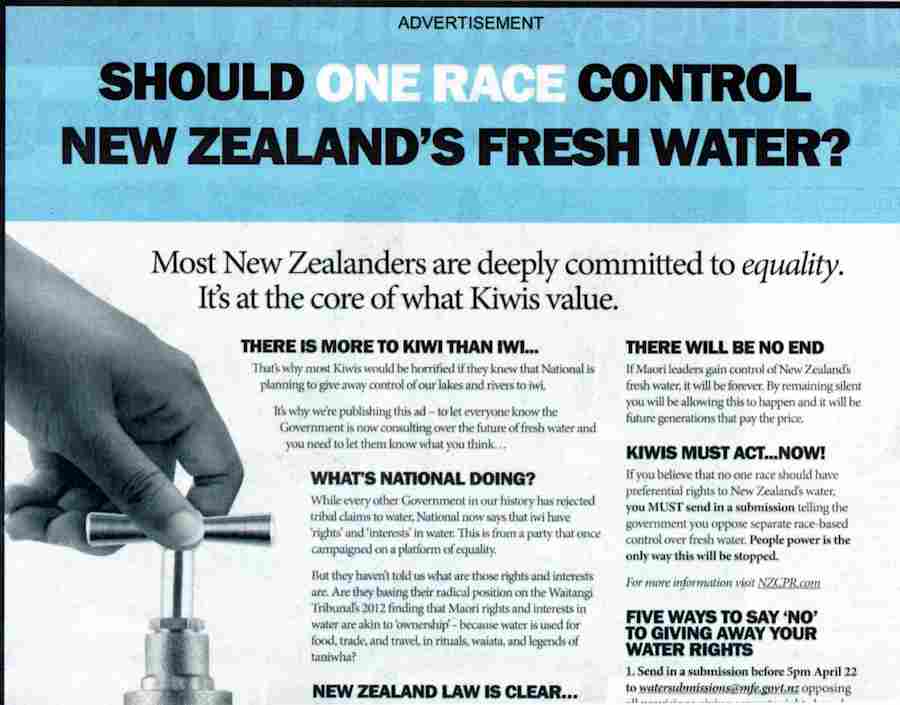 A former ACT MP is behind the campaign to oppose the Government granting any co-governance rights over water to Maori.

The campaign ran large ads in weekend newspapers saying (among other things) “there’s more to kiwi than iwi”. 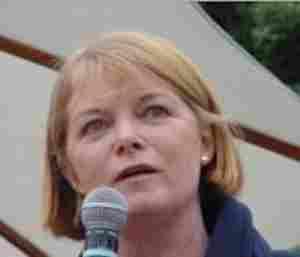 She runs a right wing Whangarei-based think tank, the Centre for Political research and is an ardent opponent of any extension of Maori rights.

She has been joined in her current campaign by former National and ACT leader, Don Brash.

The focus in the ads is on the Government’s consultation process currently underway on fresh water rights.

But it’s part of a wider anti-Maori rights campaign running at present which has been joined by NZ First Leader, Winston Peters.

Mr Peters opposes changes to the Resource Management Act which would require local authorities to consult with iwi before a consent was granted.

The RMA changes and the water discussion are linked; if Maori were to achieve some type of ownership of water then they would conceivably exercise that through their role in the Resource Management Act.

But Environment Minister, Nick Smith, was last night standing firm against the opposition.

He described the ads as “very try hard and about a decade out of date.”

“The Government has been very plain on three key aspects of its water policy,” he told POLITIK.

“Firstly that no one owns water; secondly that final decisions on the rights of water will be made by elected Councils and staff and thirdly that there will be no national fisheries type settlement on water.”

By a fisheries type settlement, he is referring to suggestions that the Government could simply allocate Maori a global water allocation as it did with fisheries quota.

Mr Smith said some extreme views had emerged at the current round of public consultation meetings on water that he is chairing.

At one meeting he said there were claims that New Zealand had no indigenous people because Maori weren’t around when Gondwanaland was formed and Maori activists on the other hand were claiming that the Treaty was irrelevant and did not supersede the 1835 Declaration of Independence by the United Tribes.

Dr Brash however argues that the resource Legislation Amendment Bill currently before the Local Government and Environment Committee sets out a path which would effectively give Maori more power over water.

The particular section that Dr Brash objects to provide for The Bill provides for iwi participation arrangements which are to provide an opportunity for local authorities and iwi authorities to discuss, agree, and record ways in which tangata whenua, through iwi authorities, can participate in the plan-making processes.

In a blog on Ms Newman’s website, reporting on his attendance at Dr Smith’s meeting he said that this opened  the door to endless delays and, at worst, corruption, “as those whose vital interests are held hostage to this long drawn-out process resort to payments to short-circuit it. “

“At the very least, it gives iwi a seat at the decision-making table simply by virtue of race or ancestry – and that has nothing to do with democracy as normally understood,” he said.

Mr Peters agrees with this saying that National seems happy to give separate rights away to Maori.

But Dr Smith says that the only legal policy change the Government has proposed is the iwi participation agreement proposal which was announced three years ago by-then Environment Minister Amy Adams and before the Government had a confidence and supply agreement with the Maori Party.

“The final decision will remain with the Council,” he said.

“The Council does not have to agree with any specific provisions in the iwi participation agreement.

“What it enables is actually a more effective functionality of the RMA.

“What frustrates the public, Councils and iwi is thousands of resource consents being referred to iwi when they have very little interest in them.”

Dr Smith is not worried about the iwi participation agreements or iwi agreement generally being a major block to the implementation of “Next Steps for Freshwater” programme.

He says he is more worried about the “grandfathering” of water rights in catchments where water allocation is limited, not by the quantity of water available, but by nutrient limits which are being challenged by the intensification of farming brought on by irrigation.

He is worried that the grandfathering of water rights will entrench high nutrient water users.

“What has become clear at the public meetings is that there is a great deal of aversion to that degree of grandparenting.”

The whole water allocation debate is highly complex and pits iwi against existing users against potential users while underpinning all of the economic arguments is the debate over water quality and nutrient run off.

The weekend ads are only going to make it more complex.