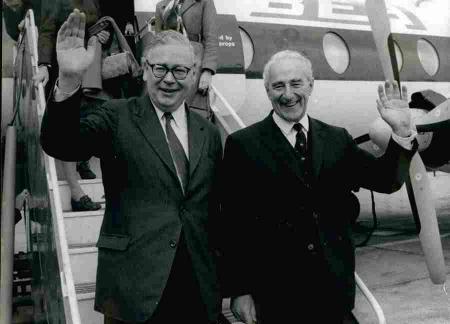 “Both with gratitude for the past and confidence in the future, we range ourselves without fear beside Britain. Where she goes, we go. Where she stands, we stand. ” PM Michael Joseph Savage, September 5, 1939.

Britain was planning to enter what was then called the European Economic Community.

Mother Britain was planning to cut the apron strings.

It was a visit that sent shock waves through the Government and the country as a whole.

Our position was succinctly summed up in the communique issued after his talks with the New Zealand Government.

It said that while New Zealand supported the objective of economic and political unity in Europe they had to have regard to the effects of possible developments upon New Zealand’s economic well-being.

“They emphasised that their agriculture, which was New Zealand’s basic industry, had been developed to supply the British market and that New Zealand’s economy was highly dependent on the sale of foodstuffs in that market at remunerative prices

“They, therefore, stressed the grave consequences for New Zealand’s economy if Britain should join the Common Market without having taken steps to protect New Zealand’s vital interests.”

THE GROWTH OF OUR DIPLOMACY

The then Deputy Prime Minister, Sir John Marshall, began what would turn out to be 11 years of negotiations with the British and the Europeans in what he said was a fight for New Zealand’s economic life to protect those vital interests.

Fifty-three percent of New Zealand’s total exports went to Britain in 1961, the year the fight began

As the negotiations and the shuttle diplomacy went on New Zealand began to change from being a provincial outpost of Britain to a more independent country.

In 1961 we had two diplomats in Europe; an immigration official in the Hague and an Ambassador to France and Unesco.

On the day Britain entered the Community we had posted in Rome, Bonn, Brussels and a full Embassy in the Hague.

Perhaps, more importantly, a generation of officials in Wellington had spent a decade learning the craft of international trade negotiations.

And the whole negotiating team didn’t do a bad job. They were heroic days in many ways, tiny New Zealand taking on all of Europe

With Sir John Marshall breathing down his neck by travelling to Luxembourg for the final negotiation, the British negotiator, Geoffrey Rippon, emerged from the talks at 3.00 a.m. with a deal which guaranteed access for five years for New Zealand dairy products and left lamb alone.

It was a good deal — it guaranteed prices which meant that in today’s terms we were getting more than twice as much per tonne for butter as we do today. We had been saved.

I caught the tail lend of this when I was assigned to cover the Wellington end of the entry at the end of 1972.

In many ways, it was anti-climactic.

Farmers conferences would offer up ritual rhetoric on the need to diversify our markets and the sudden appearance of oil-rich Middle Eastern countries like Iran seemed to offer some hope.

An extensive trip around the EEC itself in 1976 revealed that though there larger amounts of New Zealand meat, apples or dairy products  in some European countries, quantities of lamb and butter to Britain had hardly changed. Instead the diversification was coming from logs, newsprint and fish to markets like Australia and Japan.

Our pastoral farming industries were still heavily dependent on Britain; 75% of our exports there were lamb, butter or wool and it was our biggest export market.

Change was slow to come which was not surprising – our meat processing exporting trade was controlled by two huge British companies, Borthwicks and Fletchers (part of the Vestey group) and British owned companies like Dalgety’s played a major role in our wool exporting.

It all meant we were on a slow boat to economic decline.

There were more negotiations. 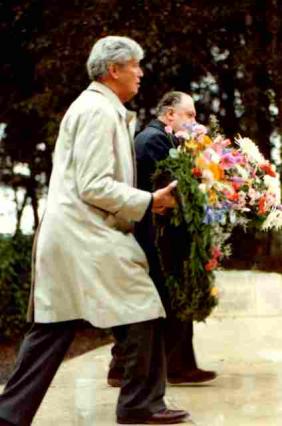 In 1980 the EEC proposed to restrict sheepmeat imports.

I watched Brian Talboys on one his many trips to the EEC, accompanied by his usual officials, Ian Stewart, Ted Woodfield and Ken Richardson as they visited every European capital, often two in the same day.

But ultimately the story was the same.

It was obvious when Sir Brian ostentatiously visited the massive Tyne Cott Cemetery to underline how New Zealand had sent soldiers twice to die in European wars.

Our argument was simply guns for butter.

In London, he lunched (at length)  with Lord Carrington, a Tory grandee who was then Foreign Minister.

In our hearts, we all believed that Britain was still home.

I interviewed the Chef at the Savoy hotel who had had his face reconstructed by the New Zealander, Sir Archibald McIndoe during the Second World War.

As an act of perpetual gratitude he insisted on ordering only New Zealand lamb for the hotel.

MULDOON AND THE FALKLANDS

Two years later, Sir Robert Muldoon would underline our relationship with his despatch of a frigate to join the Royal Navy in support of Britain over the Falklands War.

Yet at the same time, Sir Robert’s Government was making the first big step away from Europe with the signing in 1983 of the Closer Economic Relationship with Australia.

And then came the 1984 Labour Government and ANZUS, the floating of the dollar, the end of agricultural subsidies and the Rainbow Warrior bombing all happened in quick succession and changed everything.

The fundamental idea that as a small country we could best achieve our goals by being “insiders” had to end.

That had been our approach over the British and the EEC.  And it was how diplomats like Frank Corner argued for continued membership of ANZUS.

In his memoirs, Sir John Marshall, is critical of Sir John Ormond, who advocated a public campaign against the British and Marshall compares our campaign to maintain access with what he argues was an inferior but much more high profile and hostile Australian campaign over sugar.

However, the days of “Gentleman Jack” as he was known were over.

The French responded by our arresting their agents by unilaterally imposing import bans notably on that popular delicacy in France, lambs’ brains, and the British appeared either unwilling or unable to do anything about it.

By now Britain was only our fourth largest export market – Australia, Japan and the United States were all bigger.

But New Zealand was emotionally a reluctant departure with its views of Britain seemingly frozen in 1961.

This worried the British High Commission in Wellington so much that in the 1990s they set up the Link programme which was intended to try to convince us that they were now a different, multi cultural modern country.

The referendum result may suggest that was premature.

But the final and most important nail in the coffin came in 2008 with the China Free Trade Agreement.

Finally, New Zealand, like a separated partner, was able to leave home and move into its own house.

As a market, Britain is till important. Though only three percent of our exports go there they are important ones; lamb and wine in particular.

The dairy industry – the original cause of our fight for our life — has all but abandoned Britain.

Last year our sales of boats to Britain were worth more than our butter, and we actually sold more butter to France than we did Britain.

It has been a long slow divorce.

Not everyone accepts that.

Winston Peters, in a curious piece of reasoning, argues against the Trans Pacific Partnership and instead suggests a Commonwealth Free Trade Agreement.

The simple fact is that we don’t need it. We will undoubtedly negotiate some sort of agreement with the British, but it won’t happen soon.

It’s taken 56 years but where Britain goes is now her own business.