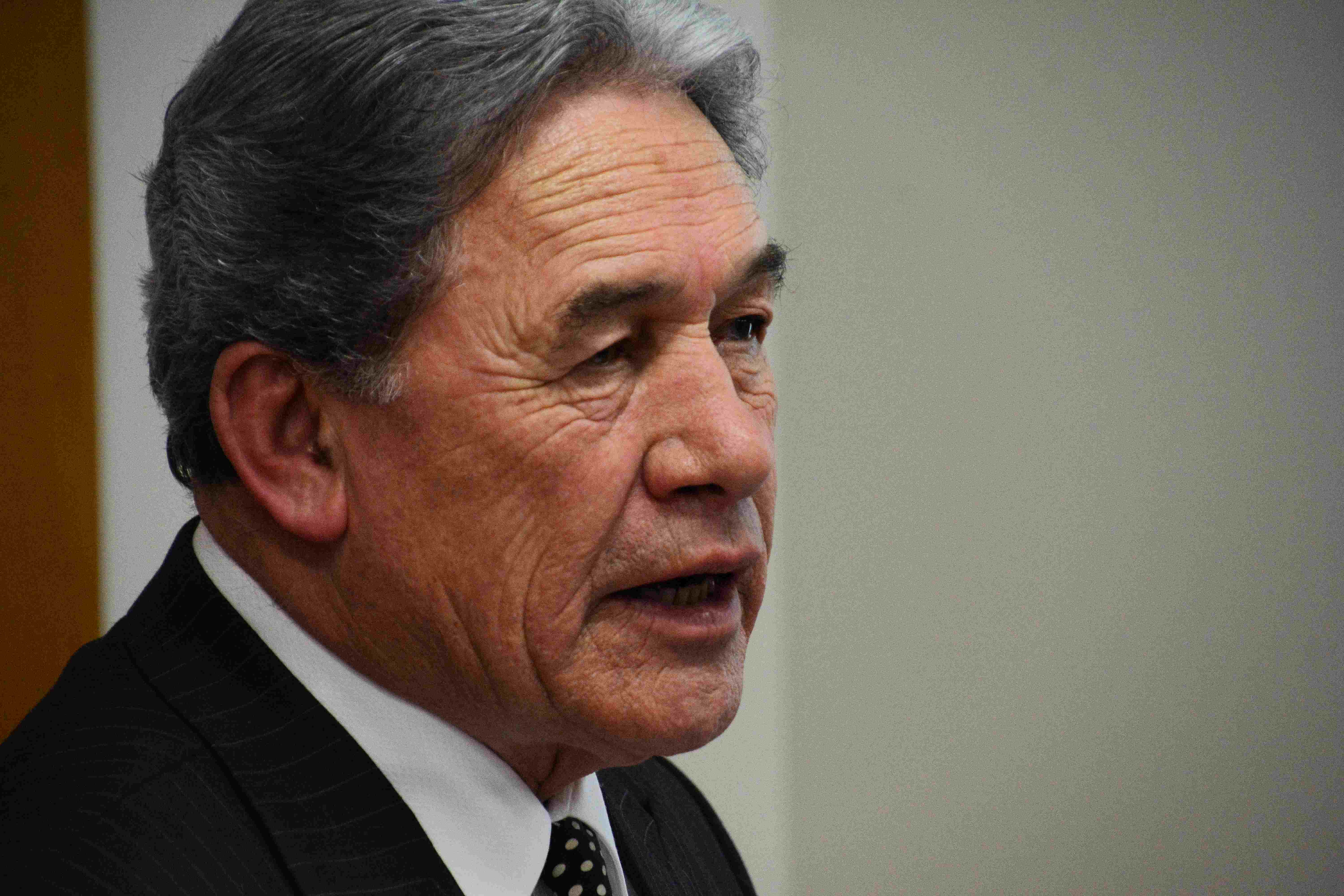 And so diplomats in the audience at the opening of the prestigious University of Otago Foreign Policy School in Dunedin anxiously scanned his speech on Friday night looking for a definition of the Ardern Government’s foreign policy, particularly towards the great rivalry between the United States and China in the East Asian region.

They knew this would be a major foreign policy speech, carefully crafted by the Ministry of Foreign Affairs and Trade in consultation with Peters and presumably the Prime Minister.

He talked about a need to restore New Zealand’s  “true voice in the world.”

“New Zealand’s independent foreign policy is regaining its self- respect,” he said.

Foreshadowing this Friday’s release of the Defence Strategic Policy Review, he said there had been recent significant developments in the global strategic environment.

“Great Power competition is back,” he said.

That was about as close as he got to acknowledging the US-China rivalry. 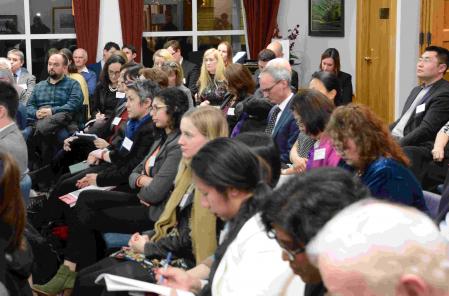 But it was what he didn’t say that attracted the attention of Asia Foundation Executive Director, Simon Draper.

“The Prime Minister has said we have four special relationships;  Australia, China, US and the UK,” he told POLITIK.

“If you look at the speech, he mentioned China, but it wasn’t as though you are important to us, you are special.

“My understanding is that the Chinese who attended the speech were asking, what are you trying to tell us?”

After the speech, a  diplomat from the Chinese Consulate-General in Christchurch asked Peters what he saw China’s role being in the Asia-Pacific region, particularly in terms of partnerships with New Zealand.

“In the same sense that we have partnerships with other countries,” replied Peters.

“So if we are doing projects, or seeking to advance the economies and infrastructure of Pacific countries, we enter into an arrangement where the outcome is the good of the people we are seeking to help.

“We have got some of those projects with China, and one or two have not gone so well, and we have to evaluate what went wrong.

“But in the main, we are seeking to encourage the Chinese Government to act in the same way that the European Union or the British do when we are working in the Pacific as partners.”

It was that casual dismissal of China which seems to have provoked the Chinese comments to Draper.

Nevertheless, Peters’ speech was certainly not all the way with the USA.

He rejected the tag “Indo Pacific” to describe the region.

This has been used by the so-called “quad” countries; the US, Japan, India and Australia.  That list omits China, and the phrase is widely regarded as a subtle attempt to counterbalance Chinese influence in the region.

Instead, said Peters, New Zealand preferred the phrase, “Asia-Pacific”. He didn’t spell out which countries it applied to but instead pointed out that DNA research showed that Pacific people were descended from the Chinese.

However diplomats from some of New Zealand’s traditional allies were pleased with the speech, particularly when he appeared to point the finger at China’s activities in the South China Sea.

He said the situation there was of serious concern because military establishments were being put there. They would only exacerbate the situation, he said.

One Western diplomat said that went further than the previous Government’s Foreign Minister, Murray McCully,had been prepared to go. 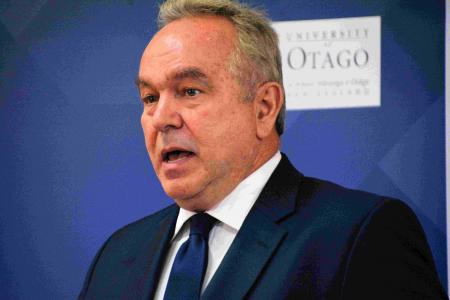 But there was another big elephant in the room as the diplomats, and academics discussed the Asia-Pacific region, and it was left to the former US Assistant Secretary of State for East Asia, Kurt Campbell, to define the impact that President Trump might have .

Campbell served in the Obama administration and worked on restoring the New Zealand relationship with the United States, and the Key Government in 2014 made him an Honorary Companion of the New Zealand Order of Merit.

He was the architect of President Obama’s so-called pivot to Asia which brought the region back into American foreign policy calculations after the post-9-11 pre-occupation with the Middle East.

Campbell had come to New Zealand from Beijing where the prospect of a trade war with the United States was seen as a real possibility.

“My guess is that you will see some trade interactions that will be quite dangerous to the global economy and we will see  whether they are able to pull back from the rim,” he said

He said the Trump administration had little interest in multi-lateral institutions or agreements and what we were beginning to see was some states in East Asia seeking a bilateral relationship with the US.

“What the President’s team are looking for is any volunteers who are willing to engage in commercial diplomacy with the United States with free trade agreements,” he said.

“They are looking for the hands to go up in Viet Nam, Thailand or even New Zealand.”

At the heart of all this, he said, was the United States domestic political situation which saw Trump’s support come from the so-called fly-over states and from white, older Americans who were able to have a good life with only a high school education.

“That experience has come to an end, and they are profoundly disenchanted with the direction of American foreign policy.

“It was very difficult for them to see an African – American elected as President and also they have real concerns about the global economy and trade.”

But these populist trends were likely to be incorporated into the dominant political culture.

“This (Trump) is not some bizarre anomaly.

“This is not something that in two years people will say what was that about.

“This is serious and fundamental.

“And it is an incredibly difficult question for like-minded states; how to manoeuvre in this environment.

“I am very impressed with how Wellington, to date, has been able to manage this.

“They have been able to speak out carefully om things that are fundamentally un-American like what is going on at the border.

“But at the same time remind the United States of its  strategic importance to the Asia-Pacific region.” 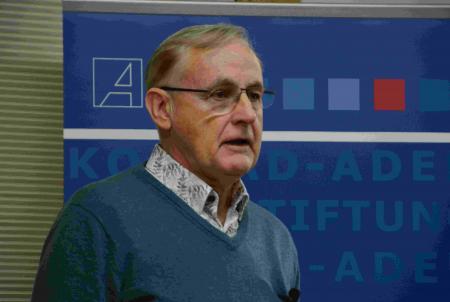 Alan Bollard, former Secretary of the Treasury and Governor of the Reserve Bank, now executive director of APEC, warned that the potential trade war between the US and China could impact economic growth across the Asia-Pacific region.

He said the World Bank had done a study which suggested that growth could drop back to the levels it fell to after the Great Financial Crisis of 2007 – 08.

He said there were already examples of companies delaying investment until things settled down.

What overlaid this, though, was the behaviour of the main protagonist in any trade war, President Trump.

“We are seeing different language as well,” he said.

“It is terminology about economic nationalisation as victimisation.

“We are seeing much more about transactional deal making versus relationships.

“There has  been some very undiplomatic language, some very direct communication, a win-lose focus, a focus on enemies rather than friends, and attacking institutions which should be of real concern to all of us.”

All of those Trump traits were on display in the leadup to his most spectacular intervention in the region, his summit with Kim Jong-Un in Singapore three weeks ago.

The summit was intended by Trump to bring an end to North Korea’s programme to develop nuclear weapons. 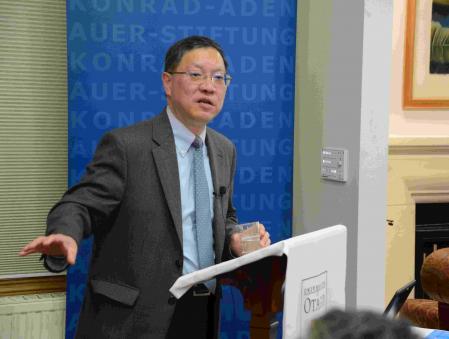 But Professor Dingli Shen from Fudan University in China, one of the world’s “top 50” universities, who was formerly a nuclear physicist, and stressing that he was not speaking for the Chinese Government, told the school that North Korea needed nuclear weapons.

He said that China had developed its own nuclear weapons only after General McArthur had threatened to use a nuclear weapon against it in 1950 during the Korean War.

“To qualify for an independent foreign policy you have to have a nuclear weapon or you had better not offend America,” he said.

“Without a nuclear weapon you don’t have an independent foreign policy; you only have Uncle Sam to protect  you.”

He said the US was now becoming increasingly intolerant of China.

It was accusing China of giving money to countries to buy influence — a subtle reference by Professor Shen to the frequent accusations made about Chinese aid to the Pacific.

The US was also challenging the One China policy by arming Taiwan and giving submarines to Taiwan.

He argued that the US-China tensions encouraged North Korea to think that they could do a deal with the US.

“He knows every option on the table is a lie.

“Every diplomatic option is a lie.”

Shen said Trump could not afford any attack on North Korea because it risked a nuclear counter-strike.

“The purpose of a nuclear weapon is not to invite an attack but to prevent an attack.”

For that reason, Shen argued that Trump had to rule out the military option against North Korean which meant he had only one option, the peace option.

Shen doubted that North Korea would irreversibly disarm or that it would disarm quickly. He suggested it could take 20 years.

His presentation was just one of many at the school that pointed to the complexity of the strategic situation in the Asia-Pacific region at the moment.

Peters can expect that he will come under more pressure to declare New Zealand’s support for one side or the other as the US-China rivalry grows and continues to dominate, as looks likely.