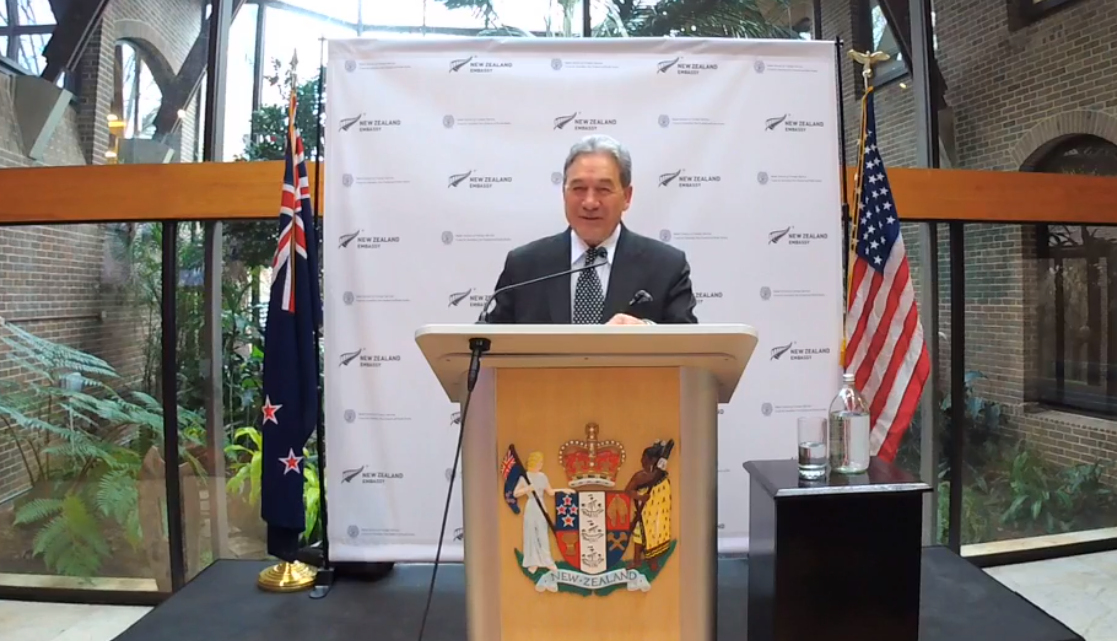 The Prime Minister, Jacinda Ardern, confirmed yesterday that she did not see Winston Peters’ major speech on NZ-US relations before he delivered it in Washington, DC, on Saturday.

The speech has raised questions about whether New Zealand is moving its foreign policy closer to the Trump administration and away from the independent stance it has pursued since the ANZUS breakdown in 1985.

It has surprised observers in Wellington that such a major speech could be delivered without at least the Prime Minister’s prior approval and probably that of the Cabinet as a whole as well.

And it has left unanswered, questions as to where New Zealand sits between the United States and China.

Peters appeared to continue the line of thinking about foreign policy evident in the Defence Policy Statement issued in March which highlighted increased tensions in the Asia-Pacific region.

On Saturday he said that while New Zealand and the United States worked  together on a range of global issues, “our cooperation and like-mindedness is now coming into sharper relief in the Asia Pacific where the region is becoming more contested, and its security is ever more fragile.”

“It is New Zealand’s view that the Asia-Pacific region has reached an inflexion point, one that requires the urgent attention of both Wellington and Washington,” he said.

And that is why we are here.”

That sounded like an overture to the United States to become more involved in the region which by itself is not that extraordinary; New Zealand has been arguing for a while that more states should become involved with the Pacific.

But China experts, spoken to by POLITIK, say that by casting the invitation within the framework of the growing big power rivalry between China and the US, Peters appears to have leaned towards the United States.

“New Zealand continues to benefit from the economic opportunities associated with Asia’s growth, and has a critical interest in the maintenance of regional security as well as growing and expanding its relationships in the region,” it said.

But since then both the United States and Australia have ramped up their rhetoric against China.

And increasingly New Zealand appears to be being lumped in by the Chinese media with Australia and the US as has been evident in coverage in publications like the state newspaper “Global Times”.

That has reported on New Zealand’s ban on Huawei supplying equipment for Spark’s 5G network.

On Sunday it quoted Wu Xinbo, director of Fudan University’s Center for American Studies, who said he saw Huawei’s case as an opportunity for China to strike back.

“Huawei’s case could be a reminder to US allies that if they continue to contain Chinese enterprises with the US, they will pay a big price,” he said.

One New Zealand former politicians who travels frequently to China told POLITIK that people he spoke to believed that New Zealand was starting to demonise China because of its presence in the Pacific.

But China watchers in New Zealand are perplexed because they cannot work out what the Government’s policy is.

However, on Thursday, the Secretary of Foreign Affairs, Brook Barrington, told Parliament’s Foreign Affairs and Defence Committee that China was not sending any signals to Wellington indicating displeasure with the relationship.

Officials are now working on trying to find a date for the Prime Minister to visit China next year and meet with President Xi — a visit that was supposed to happen on two separate times this year but was postponed by the Chinese.

It is against this background that the Peters speech received close scrutiny in Wellington. (Though it seems to have subsequently been taken down from the Beehive speech website.)

He chose a venue to deliver it in which was bound to attract the attention of diplomats.

The speech was given at Georgetown University’s Centre of Australian – New Zealand studies which is part funded by Fulbright NZ.

Peters’ Chief of Staff, Jon Johannson was a visiting fellow there in 2009.

This has given rise to speculation that he may have played a key role in drafting the speech rather than as would usually be the case, the speech being drafted in the Ministry of Foreign Affairs.

Ardern said yesterday she wouldn’t expect to see every speech a Minister gave.

“That would be an unreasonable expectation on Ministers,” she said.

Asked about Peters’ comment that the Pacific was at an “inflexion point” she said that was a conversation that had been happening in the public domain for a long time.

“The discussion around different countries’ foreign policies and whether or not that has meant that we have had less engagement in the region is a matter of public debate and commentary.

“Of course it is not only the US that we believe there will be an interest in different regions including the Pacific.

“Of course France has an interest.

“The UK may take a different approach to foreign policy post-Brexit.

“These are conversations that are worth having with those that we have shared in the past similar values and directions when it comes to foreign policy.”

So is there room in the Pacific for China?

“This is not a bidding war; this is all about making sure that where there are shared values and projects that we partner with those that are able to deliver in the best interest of our region.”

But does this speech indicate the Government is moving closer to America?

Peters was not quite so emphatic.

“ The significant focus of our visit to Washington is to share our concerns and enlist greater US support in the region closest to New Zealand,” he said.

“We unashamedly ask for the United States to engage more and we think it is in your vital interests to do so. “

Before the end of the week, there will be another test of the Government’s foreign policy.

Ardern confirmed yesterday that the Government would make a decision on whether to sign the UN Compact on Migration by Wednesday and that that issue had been discussed by Cabinet.

She said she would leave it to the two Ministers involved, Immigration Minister Iain Lees-Galloway and Peters to make the final announcement.

POLITIK has been told that Lees-Galloway favours signing but Peters has been careful not to divulge his position.

National has been trying to “wedge” him by saying they oppose signing – even though that leaves them on the same side as a number of ultra-right wing groups here but they assume that many NZ First supporters would also oppose signing.

Perhaps it should have been expected when Peters became Foreign Minister; that the portfolio would become highly political and that at times it would be challenging to discern exactly what was happening.