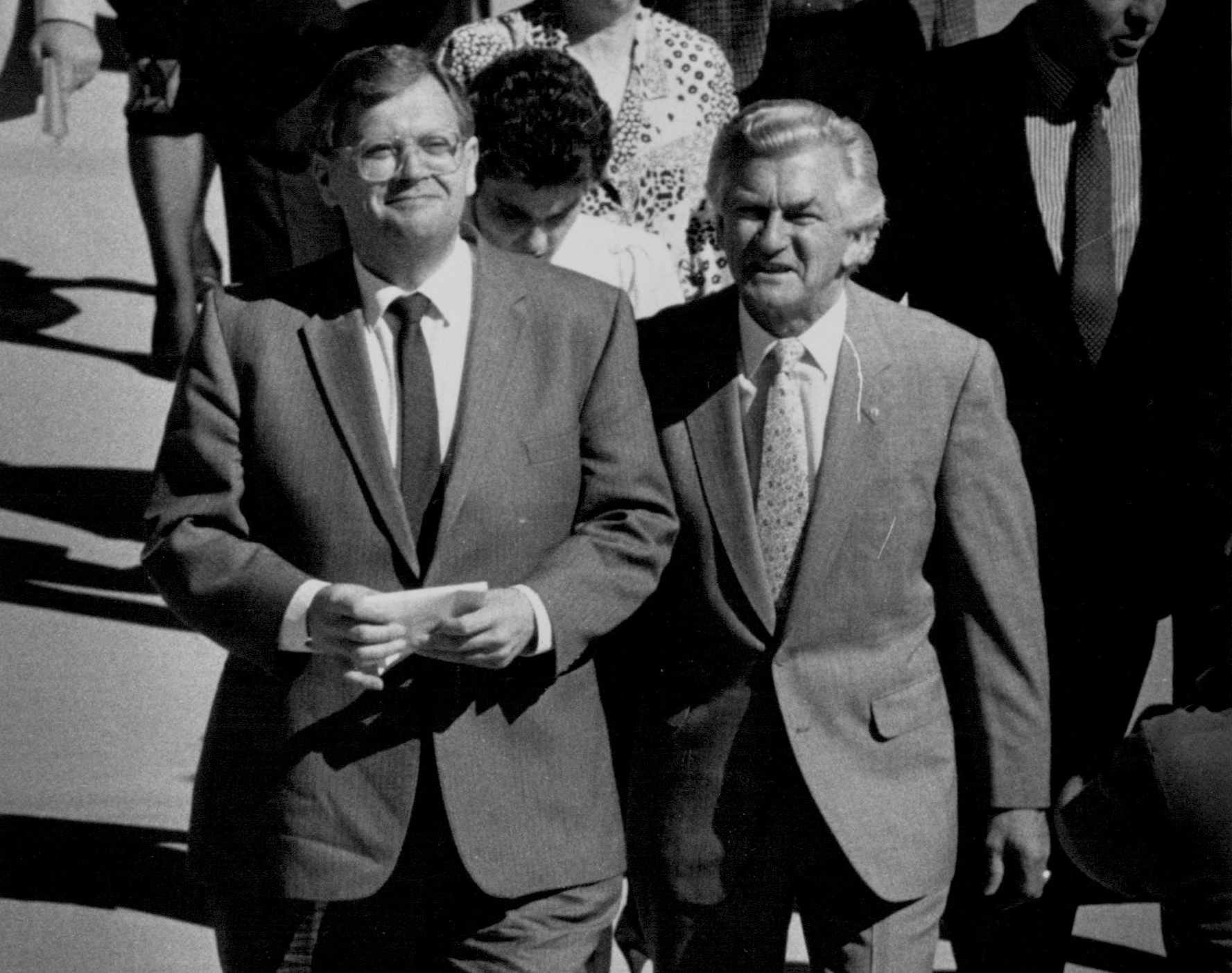 The death of Australia’s charismatic former Prime Minister, Bob Hawke, 89, raises the question as to whether his death will cast a shadow over Saturday’s election there.

Will Australians think back to the way he made Labor more popular than it had ever been in middle-Australia; in the electorates, former Australian Prime Minister John Howard called the “Hills’ hoists” suburbs. (after the rotary clothes lines).

Labor’s current leader there, Bill Shorten, has struggled to win the Australian public over but the two main parties were poised last night for a cliff hanger with an  Australian Financial Review-Ipsos poll shows Labor leading the Coalition by 51 per cent to 49 per cent on a two-party-preferred basis, down from the 52-48 lead of a fortnight ago.

The newspaper said “so volatile is the electorate, Labor could still lose with 51 per cent of the two-party vote, as it did in 1998, but the lead, if replicated on election day, might be enough to enable it to govern with a small majority or with a minority government.”

Hawke led Labor to victory in the 1983 election and was displaced by Paul Keating as Labor Leader in 1991.

Though he frequently visited New Zealand, he was often at odds with the Lange Labor Government, particularly over foreign policy.

He was, like many in the Australian Labor party, heavily pro-American.

He had managed to water down his party’s policy on nuclear ships and assured then US Secretary of State, George Schultz, in July 1984 that Lange would do the same.

Schultz left Canberra and headed to Wellington on the Monday to find the new Prime Minister-elect, elected on the Saturday, in the middle of a financial crisis.

Lange met Schultz without any officials and somehow left the impression with him that Hawke had been right; that he would water the policy down.

When he didn’t, and the Cabinet went on to ban the ships,  both Hawke and Schultz lost faith in Lange. Each reinforced the other.

Hawke had a much better relationship with Sir Geoffrey Palmer, which was kept alive by their mutual passion for golf.

Palmer says in his memoirs, “Reform” that Hawke was a good friend of New Zealand.

In 1988 Hawke came here and spent some time at the Bay of Islands. He was welcomed onto a Marae, and after the powhiri and waiata, he sprang up and began singing Waltzing Matilda in a booming voice — all eight verses of it!

That was Hawke, the ultimate Aussie with an almost uncanny sense of occasion.

Though he was on the right of the Labor party, he remained a loyal supporter of it after he left office though he bagged a few of his critics from time to time.

One Australian journalist suggested to POLITIK last night that his death might be his final gift to the Labor party; that he might encourage a sympathy vote which could get Labor over the top.

When it comes to foreign policy, though the world order has changed dramatically since the 1980s cold war, Labor’s current leader, Bill Shorten, is not all that different to Hawke.

Appearing on the ABC’s “Q+A” this week he said his first visit as Prime  Minister would be to New Zealand and Papua New Guinea.

He has come here and spoken to Labor party conferences and is well known to Jacinda Ardern.

He came to the memorial service for the Christchurch victims.

“I do not look at our relationship with China through one prism of strategic risk.

“ But I tell you what, whatever this government has accomplished in the last six years in terms of economic growth has been written on the back of exports to North Asia and China.”

He also committed Australia to upholding the Paris agreement on climate change.

What New Zealand will be hoping is that a Shorten government would be willing to challenge the US over Huawei. Australia currently is critical of New Zealand’s apparent equivocation over Huawei.

But if Shorten is promising to balance the relationship between the US and China, what the current Prime Minister, Scott Morrison would do is he hangs on is more problematical to judge.

In a piece published last month by Sydney’s Lowy Institute, Geoff Kitney, a long time Australian journalist and foreign correspondent, wrote that Morrison’s evangelical faith could play a crucial role in how he saw foreign policy.

“For whomever wins the federal election, managing the Australia-China relationship and balancing it with the US alliance relationship will be by far the biggest foreign policy – and economic policy – challenge,” he said.

“If Scott Morrison defies the odds and secures election as Prime Minister in his own right, nothing else will so test his foreign policy and diplomacy skills.

“Morrison will have a natural affinity with his faith-sharing partners in the US administration who have made it clear that they have no difficulty bringing to their political and policy judgements their deeply held Christian beliefs, as evidenced by Mike Pompeo’s statement that he believed it was possible that God had chosen to make Donald Trump President to “save Israel”.

“We haven’t had an “evangelistic Christian” PM before.

“How powerfully Morrison’s deeply held personal religious beliefs and values would play into the way he does his job, should he retain it, could count for more in the foreign policy field than any other.”

New Zealand has not seen any evidence of that; indeed on his trip here in February, he was talking nostalgically of his time in Wellington during the Shipley government when he ran the Office of Tourism and Sport.

And Australia signed the Christchurch Call.

But the two countries currently do have different approaches to China and to security in the East Asian region generally.

But these are subtle differences. Whoever wins — Shorten or Morrison — the trans-Tasman relationship is unlikely to undergo any stress.

We are certainly nowhere near the level of tension that was around when Bob Hawke was Prime Minister.