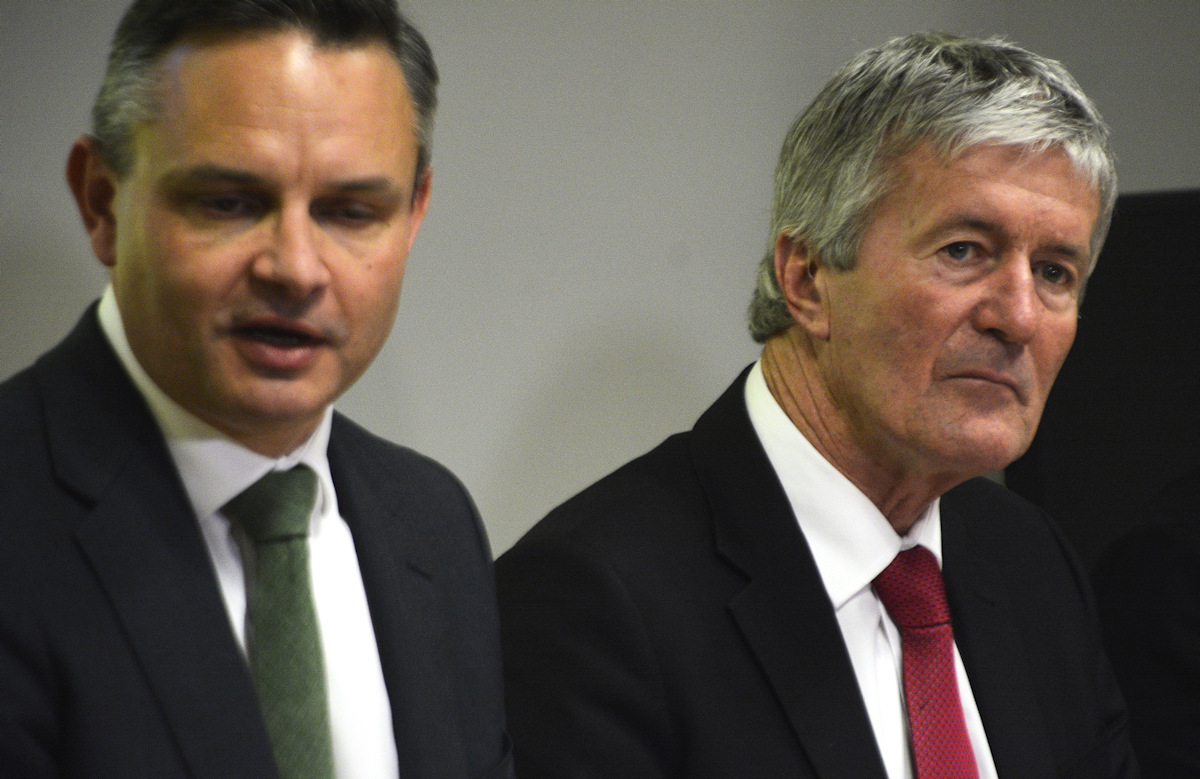 The Government is now set for some complex coalition politics as it tries to reach an agreement with farmers and its coalition partners — and even the National Party —  over how to transition to a regime which would account for agriculture’s greenhouse gas emissions.

Ironically, farm leaders at yesterday’s launch of the report of the  Interim Climate Change Committee (ICCC) indicated they are well on the way to what Agriculture Minister, Damien O’Connor described as a “consensus” on what do from 2025.

Climate Change Minister and Greens co-leader, James Shaw, was full of praise for the agriculture sector’s willingness to go as far as it has.

“Where we have gotten to is a level of consensus about the direction of travel that we have never gotten to in this country before,” he said.

“Do we want to go faster?

“That would be fantastic, but there are some real challenges that have got to be overcome in order to be able to do this.”

The biggest challenge is how to get to 2025. 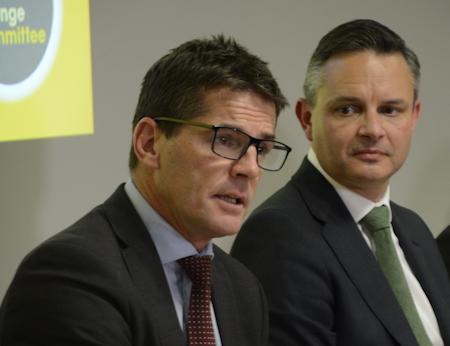 The ICCC has proposed that in the meantime, farmers join the Emissions Trading Scheme and the money raised from that would be used to fund the development of sophisticated emissions measurement systems which could then be used to support a levy and rebate scheme from 2025.

Farmers like the post-2025 proposal because it would reward efficient farmers who do make reductions in their emissions.

But they don’t like farming being part of the blunt instrument that is the Emissions Trading Scheme.

“The main difference is that we want to reward the behaviours on farm now as opposed to taking $50 million out of the sector and put it into an external pot,” said Andrew Morrison, chair of Beef and Lamb NZ.

“We want to reward the guys who are doing it and drive the behaviour as quickly as we can.”

96.5 per cent of Federated Farmers Members have responded to a Feds survey saying they would oppose farming being part of the ETS without significant conditions.

That survey, however, did not ask farmers what their attitude would be to joining the ETS for a transition period.

There was a clear attempt yesterday by the ICCC to reassure farmers that joining the scheme would produce a liability of only about one cent a kilo of milk solids, but that was provided the price did not go higher than $25 per unit.

That cannot be guaranteed.

The ComTrade ETS unit spot price yesterday was around $22.45, but futures prices showed that rising to $27 by 2024.

Agriculture leaders at the launch of the ICCC report yesterday stressed that what they wanted was a system which would measure individual farmers’ emissions.

“It is the behaviour change on farms by individuals that will deliver the results,” said Morrison

Morrison was speaking to the release yesterday by an 11-member agriculture sector group of a proposed five-year action plan to get to the levy and rebate scheme being proposed by the ICCC.

So instead of farmers going into the ETS next year, the sector groups proposed that:

Importantly the proposal acknowledges there will need to be a system in place in 2025 to charge individual farmers for their specific emissions.

And to raise the money to reach the goals they have outlined, the sector groups say they are committed to investing their own resources to develop, implement and support the 5-year programme including exploring options for raising additional funding if required, under a co-investment approach with the Government. 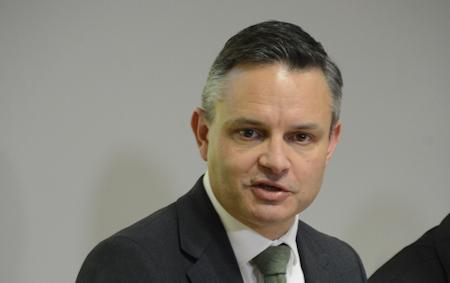 But the Government may be trapped into continuing to support the ETS proposal because of both of its partners.

NZ First committed itself to farming going into the ETS in the coalition agreement where it secured a promise that 95 per cent of required units would be free and the revenue raised by the remaining five per cent would be invested in the science and technology that will be required to reach the 2025 target of individual farmer liabilities.

The Greens are under pressure from their base to have agriculture go into the ETS full time.

Greenpeace Executive Director, Russell Norman, said yesterday  that agriculture must be immediately brought fully into the ETS so that New Zealand’s biggest polluters were finally forced to start paying for their massive climate bill.”

When Shaw was asked about this comment from his predecessor as co-leader of the Greens, he simply said Norman could make a submission; a reflection of the difficult relationship the pair are known to have.

.Even so, the Labour part of the Government finds itself on issues like this having to mediate between the Greens and the conservative, provincially based NZ First.

That could become important if, as looks likely, Government consideration of the greenhouse gas proposals run more or less in tandem with consideration of a new National Policy Standard and environmental standards on freshwater.

These are expected to be unveiled by Environment Minister, David Parker within the next two or three weeks.

POLITIK has learned that the Greens may be pressuring the Government to set a five-year limit to clean up the country’s waterways.

If that is the case, then it is possible the clean water programme could become intertwined with the climate change programme.

“There are some obligations that we are working through with the sector; climate change and water quality being two of them,” he said.

Shaw said a number of industry leaders had said they wanted to have a joined-up work programme.

“That’s because many of the things that you need to do in order to reduce your emissions are also the same things you would need to do to reduce nitrate leaching into the soil and into the water.

“And so rather than treating those as separate and sequencing them differently they actually asked us to join those things up so that they could be treated as a holistic package.”
That suggests there may be some room for tradeoffs; most probably that the time frame for the water cleanup could be extended if farmers agreed to the five-year ETYS proposal.

But while there was agreement on how to move forward the bigger long-term issue that is still hanging over how farmers respond to climate change mitigation proposals is the post-2030 methane target that was proposed in the  Zero Carbon Bill of a 24 – 47 per cent reduction below 2017 levels.

There is widespread farmer opposition to this, and most sector groups say that the target cannot be reached on present technology without reducing stock numbers.

“I think farmers should take some comfort that it won’t be politicians making that final decision,” said O’Connor.

“It will be a recommendation from the Climate Change Commission on that long term goal depending upon the technology available at the time.

“What we have said is that we want a 10 per cent reduction by 2030 and then that long term target will be assessed at that time.

“It will be based on science, not guestimates.”

Shaw said that the provision in the legislation for a review was because a 20 point range was not an effective target.

National have said they wanted a bipartisan agreement on the Zero Carbon Bill which will set up the climate change architecture.

But there appears to be a hardening of their position against it, in part provoked by the tough post-2030 methane targets which have drawn so much opposition from farmers.

And yesterday, Leader Simon Bridges was saying National opposed farming going into the ETS or any levy system until farmers had the technological and mitigation tools that would enable them to reduce their emissions.

The party’s Climate Change spokesperson, Todd Muller, said that the Government was saying they had reached a historic agreement with the sector on a five-year work programme before on-farm pricing was established.

“On the other hand, they are consulting on an option that would essentially ignore this agreement and introduce agriculture into the ETS by 2021,” he said.

“We strongly opposed all of these taxes.

“ Introducing agriculture into the scheme before the tools are available to address emissions will simply be a new tax on the sector.”

National is going hard on this in part to try and drive a wedge into the NZ First vote. In fact, the mood within the agriculture sector did not appear to be as negative as National.

Dairy NZ’s CEO, Tim Mackle, said the bottom line was that the agriculture sector had engaged with the Interim Climate Change Committee.

“We agree with quite a lot; the same with the Zero Carbon Bill, “ he said.

Mackle does want more detail on the ETS; particularly on the 95 per cent free allocation and how that would be calculated.

But the mood at the media conference was upbeat and positive. However, it may not remain so if the Government cannot make some big changes for the period up to 2025.

That is where the debate will now go.