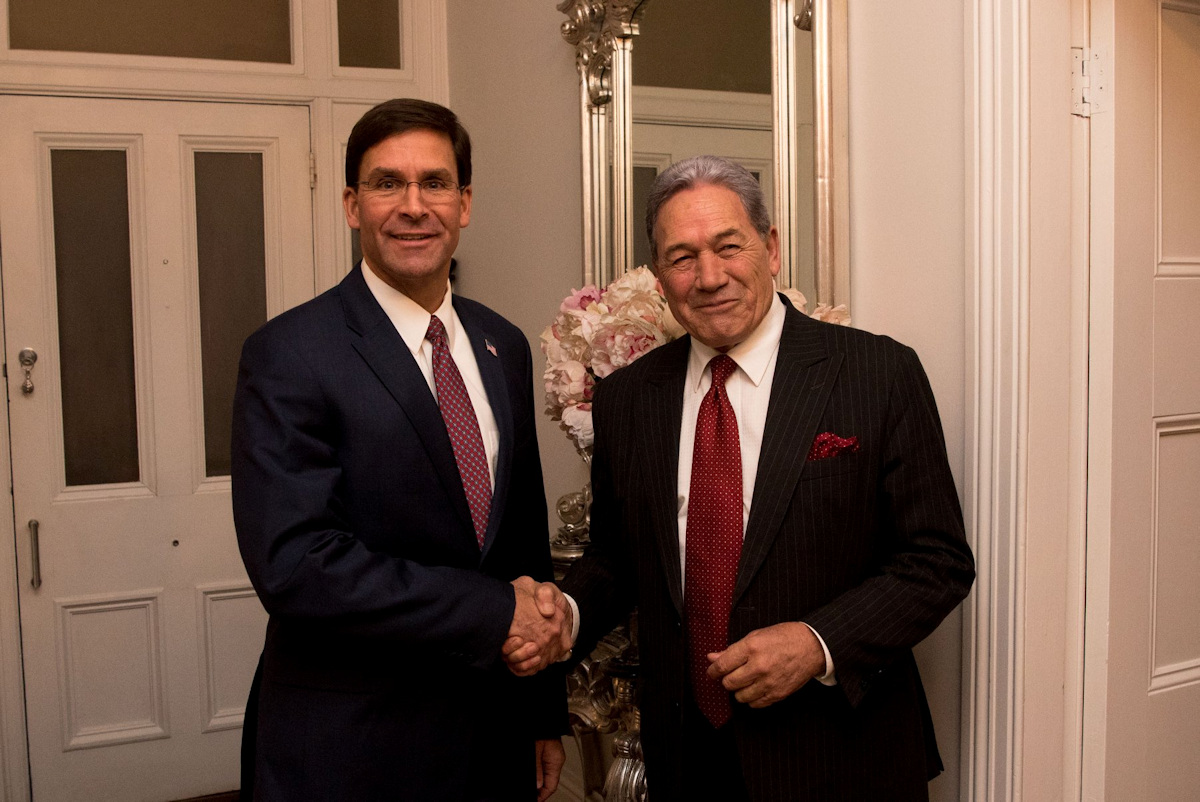 The United States Secretary of Defence, Mark Esper, left the country yesterday with tensions between China and the US in East Asia rising and New Zealand caught in the middle.

Esper arrived having attacked China while in Australia for what used to be the ANZUS Council meeting and then proposed stationing US missiles capable of reaching China in Australia.

In New Zealand, he met with Defence Minister Ron Mark and then had a private dinner with Foreign Minister, Winston Peters.

On his Facebook page, Esper praised the “insight into security in the Indo-Pacific” he got from Peters.

That comment will worry the Chinese. Diplomatic sources in Wellignton say they are convinced that Peters is trying to get New Zealand closer to the US.

At the same time, the US is putting pressure on the countries in the East Asian region to take a tougher line with China.

In a question and answer session at the Sydney Centre for Independent Studies on Sunday, Pompeo said: “You can sell your soul for a pile of soybeans, or you can protect your people.”

He argued that China’s economic strength enabled it to be more assertive strategically in the region.

China’s capacity, the People’s Liberation Army’s capacity to do exactly what they’re doing is a direct result of the trade relationships that they’ve developed,” he said.

” They grew their country on the backs of a set of unfair trade rules.

” So they were able to grow their economy at a high rate of speed and – and to steal technology and to force technology transfers.

“Those very same economic tools that President Trump is so focused on fixing are what also have enabled China to do all the things they’re doing with their military all around the world.

“It underwrites their capacity to build their military.”

For New Zealand, for whom China is now the largest trading partner, any move that would threaten that trade could be disastrous.

Treasury reported on Monday that between 1998-2018, export growth to China amounted to $13.1billion, or 39% of New Zealand’s total nominal export growth.

China has shown that it is capable of taking action against imports for political reasons.

It is widely believed that around 15 million tonnes of Australian thermal coal worth more than $1 billion currently waiting to clear customs in China has been delayed because of China’s discontent about Australia’s decision to ban Huawei from its 5G network.

Esper however focussed on China as a military power, not as an economic partner.

“We also stand firmly against a disturbing pattern of aggressive behaviour, destabilizing behaviour from China,” he told media in Sydney on Sunday.

“This includes weaponizing the global commons, using predatory economics and debt for sovereignty deals, and promoting state-sponsored theft of other nations’ intellectual property.”

He said the United States would not stand by idly “while any one nation attempts to reshape the region to its favour at the expense of others, and we know our allies and partners will not either.”

And on his way to Australia Esper indicated that with the United States withdrawal from the Intermediate-Range Nuclear Forces Agreement restricting medium-range missiles, the time was right to reply conventionally armed missiles with a range of up to 5500 miles to what he called the “Asia Indo-Pacom theatre.”

That would mean they could be located in Darwin and still hit China.

But Australian Prime Minister Scott Morrison and Defence Minister Lina Reynolds both quickly ruled out any placement of missiles on Australian soil.

“China will not just sit idly by and watch our interests being compromised,” said Foreign Ministry spokesperson, Hua Chunying.

” What’s more, we will not allow any country to stir up troubles at our doorstep.

“We will take all necessary measures to safeguard national security interests.

“We hope the US will exercise prudence and refrain from escalating tensions or undermining international and regional peace.”

New Zealand is thus left having to walk a very delicate line between Washington and Beijing as it tries to preserve its economic relationship with China and its close alliance with Australia and its friendship with its former ally, the United States.

The Prime Minister appears to be dealing with this by trying to avoid talking about China at all.

Neither China nor the Asia Pacific region was mentioned during a joint press conference she held in Wellington yesterday with NATO Secretary-General, Jens Stoltenberg.

And asked at her Monday post-Cabinet press conference about the actions of the Chinese Consul General in Auckland trying to shut down antiChina protests over Hong Kong, she said that though the government was concerned about any threat to academic freedom, she did not want to be “country-specific” in discussing that.

China, however, continues to maintain its close relationship with New Zealand, and it is believed the Prime Minister is likely to visit Beijing again in the new year.

How Washington (and Canberra) will react to that is now, in the light of the escalation of what some have called the new cold war, unknown.