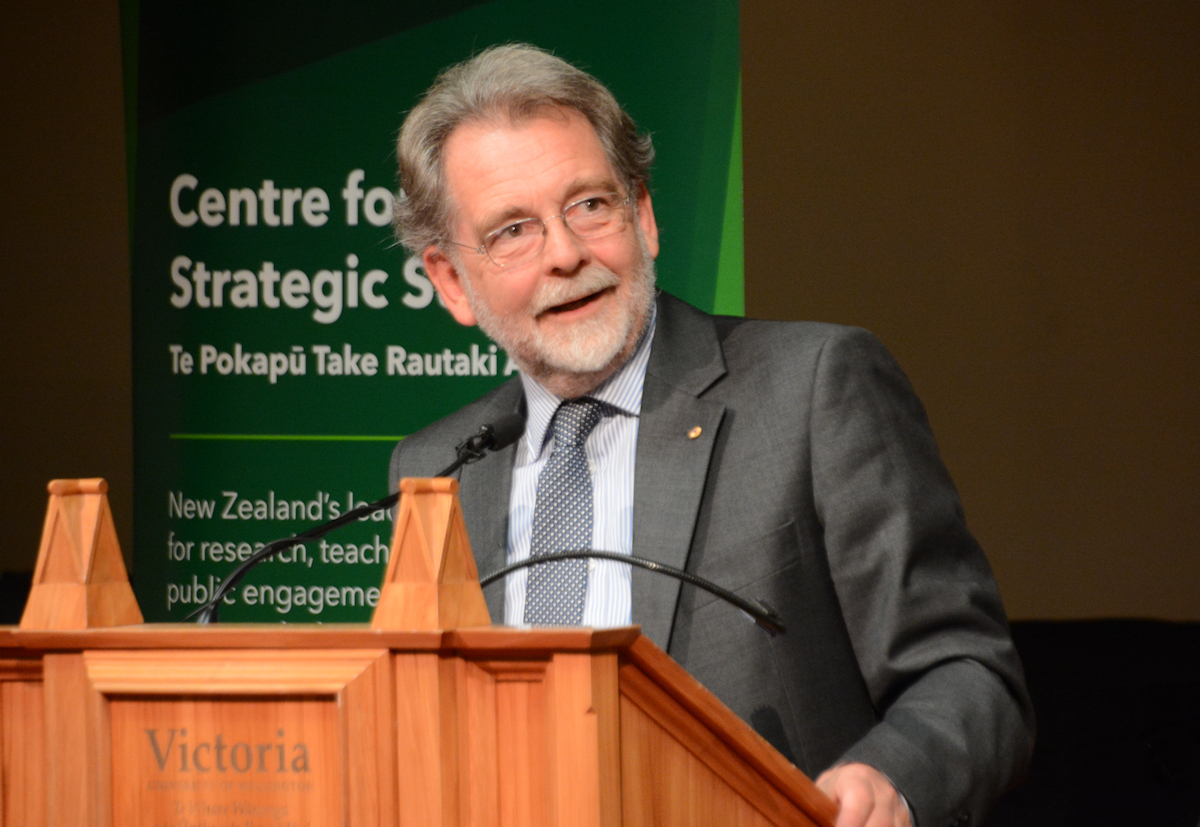 White spoke at an event organised by the Victoria University Centre for Strategic Studies on his latest book, “How to Defend Australia.”

(He spoke to POLITIK About the book in July)

Today he will speak to senior military staff and will also speak to a meeting at the Ministry of Foreign Affairs and Trade.

White’s central thesis is that the U.S. is both declining as a power and partially withdrawing from the Western Pacific as a consequence.

Instead, China is replacing it as the major economic and military power in the region.

He says Australian and New Zealand defence policy has always been based on the assumption that if the worst came to the worst, and China sought to exert military influence on the region; then the United States would intervene. That assumption could no longer hold.

He said Australia’s defence policy had always been based on the presumption that it could not defend itself.

And that was the same for New Zealand.

The international order in which New Zealand has depended globally and in Asia has in the end been one that’s been framed and created and upheld and enforced by Western Power and especially for many decades past, by U.S. power,” he said.

But he said, even so, New Zealand tended to talk about security differently from Australia.

“Where we tend to answer the question of how to defend Australia, we talk about alliances whereas New Zealand tends to talk much more broadly about international institutions and so on. “

However, he argued that Australia and New Zealand, which had been drifting apart on defence policy since New Zealand broke with the U.S. in 1985, would now need to move back closer to each other to contend with China without the U.S.

“We do face the same problem; declining U.S. power and influence  and the rising power and ambitions of others.”

White said we did not share all of China’s values, and in the future, China might  be “willing to use force to compel us to do things we don’t want to do.”

He said last year’s  Defence Policy Statement expressed these anxieties when it said that  today and into the future, the rules-based order was coming under increasing pressure from three broad forces and their dynamic interactions including the “ growing importance of spheres of influence, with some states pursuing greater influence in ways that, at times, challenge international norms.”

“ The focus in that document on the spheres of influence of Asia’s great powers and the hints, more than hints, that New Zealand may need in future to use armed force  to uphold the rules-based order from the pressures imposed by geostrategic competition; that is, I think,  quite a significant shift from the way I at least saw  New Zealand’s views of the role of force in upholding the international order in the past.”

But White argued that trying to preserve the rules-based order was likely to be a futile pursuit.

“ I do think however that it continues to be an assumption not dissimilar from Australia’s assumption that the rules-based order as we know it is going to be fairly easy to preserve; that without demanding a fundamentally bigger effort in New Zealand it’s going to be possible to deter, defer, discard these challenges and resist and return ourselves to the old status quo on a sustainable basis.,” he said.

“And I do think that like Australia, that’s too optimistic.

“If I’m right the rules-based order is already passing and may well have already passed and so I think for New Zealanders, for Australia, the Defence policy challenge is not as your  Strategic Defence Policy Statement suggested to work out how to preserve the old order; but what to do when it’s gone.”

White said the challenge would now become how to survive and flourish in a region in which we didn’t have the luxury of western protection framed by a great and powerful friend.

White said that Australia had two choices on security policy and whichever one it chose would impact on New Zealand.

It could be a small power and decide not to hold its own against military pressure from a major power, and New Zealand would have little choice to but to follow suit.

Or it could decide to be a middle power and New Zealand would face a choice as to whether or how far to support Australia in doing that.

“And there’s an interesting question as to how far New Zealand choices and New Zealand decision to support Australia would affect Australia’s choice.

“I’m not quite sure about that.”

White said that given that New Zealand’s GDP was about 15 per cent of the size of Australia’s total GDP, it would make a significant addition to Australia’s defence capability.

“The most natural way for New Zealand to do that would be to focus on one or two capabilities which would be critical to a collective maritime denial capability.

“I wouldn’t frankly spend a lot more money on surface ships, at least not on surface ships equipped for operating in highly contested environments because I don’t think that’s going to work.

“I don’t think Australia should be doing it either, but big investments in long-range maritime patrol aircraft and their un-crewed successors makes a lot of sense.”

White, however, said he was not a great fan of the Poseidon P8 maritime patrol aircraft which New Zealand was buying four of because of what he said was its over-emphasis on anti-submarine warfare.

“But the surface search and anti-surface ship capabilities. that makes a lot of sense.

“So it’s not as though it’s impossible to conceive what a New Zealand contribution would look like.

“But to carry much weight, it would need to be a lot bigger than New Zealand conceives at the moment.

“And so New Zealand faces that same choice that Australia faces; is the risk out there big enough to warrant that kind of effort.

“And I don’t know the answer to that, but I think that is the decision that New Zealanders are going to find themselves facing.

“If I’m right that our confidence in the sustainability of the status quo over the next few decades is going to prove to be misplaced, then it’s going to be an easy decision.

“But I do think that it’s a choice that’s going to have to be made.

“It’s going be hard to dodge the pressure that global forces and, regional change are imposing on us.

“So Australia faces some major new decisions about the way it thinks about its defence.

“We are facing the biggest shift in the strategic environment at least since the end of the Vietnam War and, I think, in our case since European settlement in 1788.”