Environment Minister David Parker is dismissing Opposition claims that all of Central Otago will need to be planted in forest for the region to meet his tough new freshwater cleanliness requirements.

But a Government report shows that though the whole Clutha catchment will not have to be planted, over 400,000 of the two million hectares will need to be put into forest, and those trees will be on the iconic hills that frame the famous Central Otago landscapes.

Asked about the proposal in Parliament yesterday Parker said the idea that the Government would put out a proposal that required the entire Clutha catchment to be forested was nonsensical and not correct.

But a report from Landcare Research for the Ministry for the Environment contains proposals for over one million hectares across the country to be planted and nearly half that is in Otago in the Clutha catchment.

The proposal would make a radical difference to the landscapes from Queenstown down the Clutha to the coast at Balclutha.

The 105-page  report was prepared last month for the Ministry who required “an analysis of the potential impacts (physical and economic) of proposed regulations to be included in the National Policy Statement – Freshwater Management for managing in-stream suspended sediment attribute bottom lines nationwide.”

Since the new freshwater standards were published a fortnight ago, much of the debate and focus has been on dairy farming and nitrates.

But the standards also crackdown on sediment in waterways.

The Ministry for the Environment’s discussion document says that excessive sediment is one of the most severe stressors on our freshwater and coastal ecosystems.

“Soil washes naturally into rivers and streams, but human activities have caused major increases in soil loss, which is harming freshwater plant and animal communities,” it says.

And so there is a new standard for “suspended fine sediment” in rivers and waterways which can vary across the country.

Necessarily the standard would take some time before it could be met.

That is because the main way that landowners will be able to reduce runoff from their properties will be by developing farm plans to limit erosion which will be main achieved by planting trees.

But many areas of catchments will not achieve any substantial control of erosion and runoff without widespread planting.

The Landcare report says that to meet the sediment reduction targets, afforestation will be needed on about 1.056 million hectares and Farm Plans on 6,055 ha.

That million hectares would allow the planting of about one billion trees — exactly the number that Forestry Minister Shane Jones has proposed.

But what Jones has not proposed is where the trees would go.

The report, however, does.

It says that the region which would require the most afforestation is Otago, which would need about 429, 000 hectares of forest planted.

“Regions such as Canterbury, Southland and Waikato also need afforestation of large areas,” the report says.

“Such large scale adoption of afforestation is due to its high sediment reduction effectiveness, revenues from carbon sequestration and low annualised costs.”

The report proposes substantial afforestation for the  Clutha catchment.

“Even if the entire mitigatable land of the Clutha catchment is treated, it cannot meet the sediment reduction target,” it says. (mitigatable land is steeper country, generally prone to erosion)

“Accordingly, for the Clutha catchment, complete afforestation of the mitigatable land is needed to at least approach the sediment reduction target. “

This could see pines planted on the hills and mountain slopes of the iconic Central Otago landscape; an outcome which the Environmental defence Society has vigorously opposed in the McKenzie country to the north of Otago.

But the rest of the country will not face such daunting challenges. 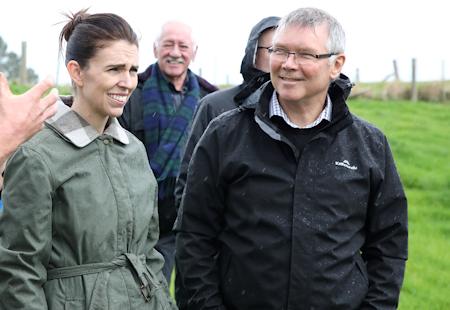 “Waikato, Ruamahanga, and Mataura catchments, and Kaipara tributaries can meet the sediment reduction targets, by allocating about 83,000 ha, 11,000 ha, 12,000 ha and 29,000 ha to afforestation, respectively.

“Large areas of the Waikato, Ruamahanga, and Mataura catchments, and Kaipara tributaries do not require further mitigation as they can meet the sediment reduction targets.”

On August 11, the Prime Minister, Jacinda Ardern and Parker visited a farm at Titoki between Whangarei and Dargaville, on northern tributaries of the notoriously muddy Northern Wairoa River to highlight the forthcoming campaign to lower sediment in rivers.

“Estuaries like the Kaipara are clogged with sediment and mangroves,” said Ardern.

“Actions in Kaipara will include simple solutions such as riparian planting, wetland preservation and development and fencing  streams

“To support this, the Government will be investing $12 million to help improve catchments, with a share going to Kaipara.”

Parker said the Government was working with the community to help understand what can make the greatest difference and then what interventions to take, such as where to build and restore wetlands, or where more hillside planting is required to stabilise steep land, as part of this new nationwide programme.

“Other government initiatives and funds were also part of the mix including One Billion Trees, the Provincial Growth Fund and the Freshwater improvement fund,” he said.

However, the proposals to stop erosion will cost farmers.

“Moreover, these are substantial costs incurred by farmers who have large areas of eroded land (e.g. pasture farms).

“These high costs may drive some farmers to change their land use or even shift their employment to non-agricultural work.”

But because trees can also earn Emissions Trading Scheme credits, they will also provide an income for landowners, and the study found they would amount to $253 million across New Zealand with $181 million going to Otago landowners — perhaps a reminder of how extensive tree planting will have to be there.

This report will pose a challenge for the Government; how to reduce sediment in rivers like the Clutha without destroying the iconic landscapes that define the region.