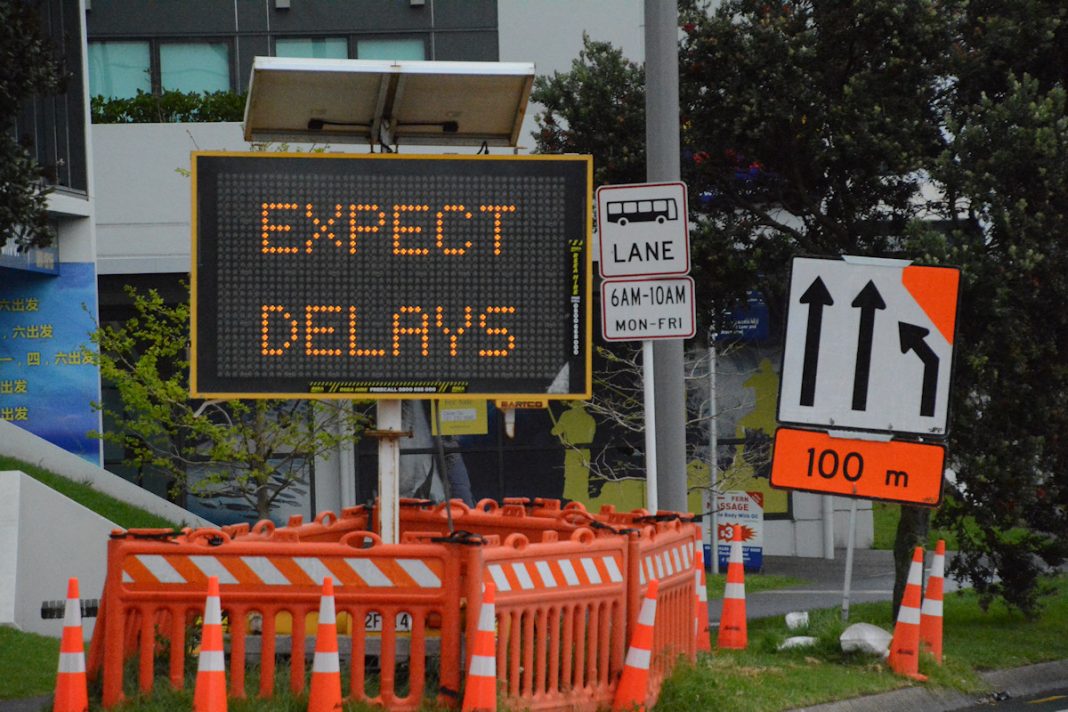 Auckland traffic congestion now trumps any other issue as a driver of the lack of business confidence in the city.

And Finance Minister Grant Robertson appears to have got the message.

The NZME “Mood of the Boardroom” survey of 157 mostly Auckland executives published yesterday found they rated congestion in Auckland as the top domestic factor impacting on business confidence.

The presentation of the results yesterday featured the first debate between Robertson and National’s new Finance spokesperson, Paul Goldsmith.

And when Robertson was asked what he prioritise if he were running to be Mayor of Auckland he listed “transport” as the top issue.

“We could be doing so much better if we had clarity from the Council around. its key infrastructure projects,” he said.

“A little bit less ideology around some of its transport decisions and a little bit more control over Auckland Transport  would be a useful place for us to start.”

Goldsmith said infrastructure was the core of politics.

“It’s the core of politics, and unfortunately one of the first things this government did in its government policy statement on transport was remove a focus on reducing congestion,” he said.

“And so if you do that, it does make it difficult.

“That is the tension that we have, and so our approach to transport is much more balanced and is focused on helping people move around.”

Robertson, however, was not going to let Goldsmith get away with that and came back to the gaps that were evident in the capital budget and the unfunded gaps in the Auckland Transport Alignment Project which is essentially a shopping list for Auckland road and rail projects that became evident when the Government was formed in 2017.

“In terms of Auckland specifically that is again a very long term legacy issue,” he said.

“Your transport alignment project is a $28 billion project.

“We filled that up with our contribution plus the contribution of everyone in this room through the regional fuel tax.

“So those projects are now able to get out of the way.

“We are seeing that work rolling out right across New Zealand in terms of the land transport funding.”

What Robertson didn’t mention was that when it came into Government, the coalition scrapped the $1.85 billion East-West link designed to take mainly trucks along one of Auckland’s major industrial spines, from Onehunga to Penrose.

And the Auckland Council claims that there is a $2 billion transport funding shortfall for projects in the Drury and Pukekohe areas.

The Council says affected projects include the Mill Road Corridor, rail electrification to Pukekohe, new rail stations and improvements to State Highway 1 that it says need to be addressed before major housing development plans can go ahead.

Goldsmith was happy to emphasise this.

What did they (the coalition) do when they came in they just threw out several of the things on the list and brought in the slow tram (the Dominion Road light rail)  so you’ve got this big pipeline out in the never never and nothing actually happening in the next two or three years.”

Robertson interrupted: “How would you fund Auckland transport, Paul?”

Goldsmith: “The four billion dollars we would get out of the Land Transport Fund …”

Robertson: “That would leave you five billion short.”

Goldsmith: “That’s right, but there is plenty of money if you spend it properly. If you waste it on a slow tram down Dominion Road, there is not much left for anything else to happen.”

The audience of Executives were obviously leaning towards Goldsmith; their response to the confidence question underlined that.

ButRobertson came back to confidence several times during the debate and directly addressed the survey which showed that more than 50 per cent of the executives from the agriculture, property, dairy, construction and tech sectors had less confidence in the general situation in their own sector compared to last year.

But paradoxically, 66 per cent of executives expected their businesses to show revenue growth over the next year, and 52 per cent expected profit growth.

Robertsonsaid that he understood that confidence was down.

“I get that that’s down from last year,” he said.

“It’s very easy to buy into the rhetoric that slowing growth somehow or other means no growth; it doesn’t.

“ It actually means that we’re working harder than ever in a world where challenges are in front of us.

“ We are in a position where we continue to grow faster than Australia, Canada, Japan, the euro area and the UK.

“We are doing relatively speaking well.

“The fundamentals are strong.”

But if Robertson had to answer on confidence within the room on his programme Goldsmith had a more challenging task.

But Goldsmith thought those judgements were harsh.

“Two years into opposition and we are still polling in the mid-40s, so I think the leader is doing a good job at holding our opposition together and is fighting hard,” he said

“ And yes,  he’s had some pretty tough times, but he’s a fighter, and I’m confident that he can lead us to a good result and potential victory next year.”

And with that, the executives, the Minister and the Opposition spokesperson finished their breakfast and went out onto the streets to battle Auckland’s traffic once more.

ACT is back with more members, more money and a bold new plan

Years of pain, difficulty and frustration lie ahead.

“Helicopter” handouts not yet cleared for takeoff