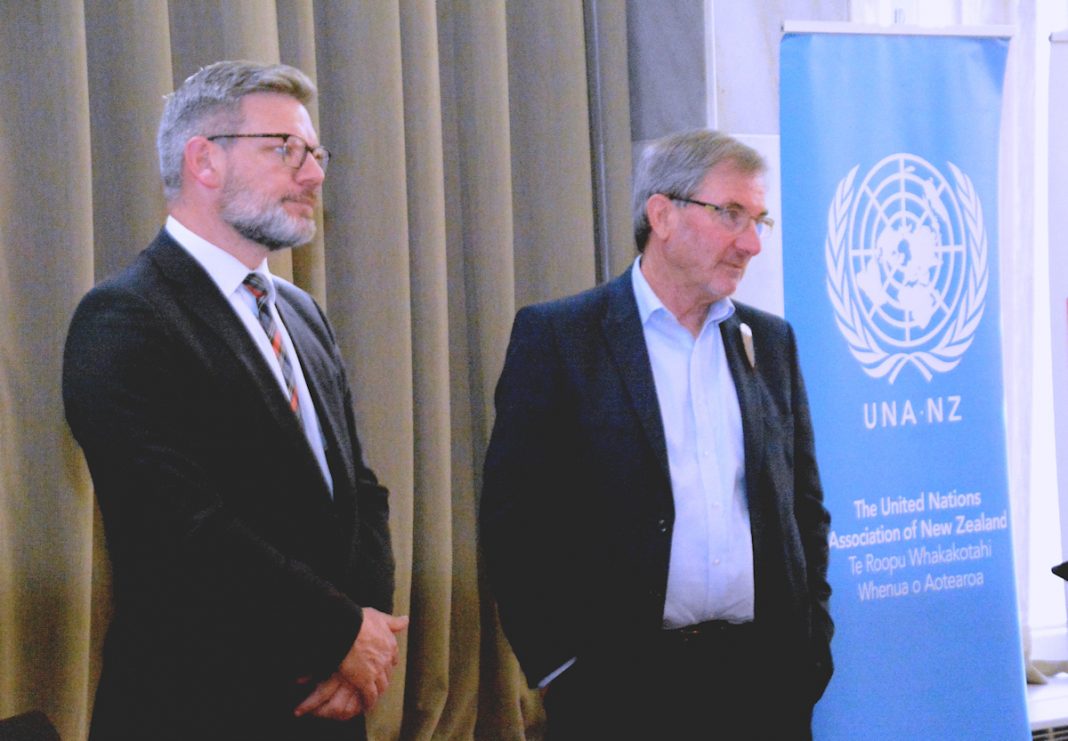 The National Party’s dog whistle to the extreme right on migration came under scrutiny at a United Nations Association event in Wellington last night.

National has said it would repeal New Zealand’s signing of the U.N. Global Compact on Migration.

This has been a popular cause among extreme nationalists, and the Christchurch gunman’s online manifesto included a photo showing ammunition clips on which had been written “Here’s your migration compact” – referring to the U.N. compact.

Even after the shootings, National continued with its campaign.

National leader Simon Bridges publicly humiliated a staff-member who took down a petition opposing the Compact from the party’s website.

Bridges claimed that the Compact had the potential to restrict New Zealand’s ability to set its own migration and foreign policy.

Speaking to the event at the Banquet Hall in the Beehive Immigration Minister, Iain Lees-Galloway pointed out that all the preparatory work on the Compact had been done under the National Government after it joined 192 other countries to sign the New York Declaration for Refugees and Migrants in 2016.

“New Zealand advocated for a balanced, non-binding compact that does not replace existing international agreements and standards, but rather sits alongside and upholds existing mechanisms such as the sustainable development goals,” he said.

He said that negotiations continued through to 2018.

“Officials engaged in the development of the compact to seek consistency with New Zealand’s domestic policies, to ensure that it was not legally binding and  that it could be applied in accordance with the state’s capacity and priorities.”

They did that under instructions from the Key, English and Ardern Governments and those instructions did not change when the Government changed in 2017.

“These were the mandates agreed by the Ministers of Foreign Affairs and Immigration in the current and previous governments,” he said.”

Lees-Galloway said officials also engaged in these processes to ensure that the Compact was based on existing human rights law.

“Our officials’ assessment was that the compact largely met these objectives and the small number of areas where New Zealand’s domestic policies differ from the suggested actions of the compact, New Zealand is able to apply the compact in a manner consistent with our own legislation policies.”

Sociologist, Professor Paul Spoonley, the Pro-Vice-Chancellor for the College of Humanities and Social Sciences at Massey University has just returned from several months conducting research into immigration and diversity at the Max Planck Institute of Religious and Ethnic Diversity in Goettingen, Germany.

He said there had been very strong support for the Compact from the European Parliament.

But they had concerns.

Spoonley referred to Lees-Galloway’s reference to there currently being 270 million people in the world who were not living in the country they were born in.

He said the European Parliament noted the campaign of disinformation about the U.N. Compact and that the National Party’s call to withdraw from the agreement was echoed in a number of other countries which had signed.

Spoonley referred to a “very modest petition” in New Zealand (6000 signatures) which centred on the idea that the Compact would allow illegal migrants to enter the country.

“It does nothing of the sort,” he said but there were three tension points around the Compact.

The first was the it got support from countries at the U.N. conference because it recognised the sovereign rights of states.

“But that does leave open how the Compact is going to influence states to develop better practice around mobility and the international management of mobility particularly within those countries that have developed very strong anti-immigrant domestic politics.”

The second tension point was around the way the compact sought to influence the way in which migration was understood and discussed.

He referred to Objective 17 of the Compact which commits signatories to eliminate all forms of discrimination and to “condemn and counter expressions, acts and manifestations of racism, racial discrimination, violence, xenophobia and related intolerance against all migrants in conformity with international human rights law.”°

It commits countries to promoting an open and evidence-based public discourse on migration and migrants in partnership with all parts of society, that generates a more realistic, humane and constructive perception in this regard.

“We also commit to protect freedom of expression in accordance with international law, recognising that an open and free debate contributes to a comprehensive understanding of all aspects of migration,” it says.

Spoonley described it as “laudable but problematic.”

“Even when we have discussions  (on immigration) in this country many of the points of view are not based on evidence,” he said.

“The other issue is the way in which these issues are being discussed online in terms of the Internet.

“As somebody who is now researching and writing about hate speech on the internet I’ve got to say that it is a major issue and one of the issues that we do need to deal with.”

And he said the third point was that though it was multilateralism in practice, it left open where we went from here.

“Actually, how are we going?” he said.

“Where do we go from here to in terms of influencing states?”

“And so we are seeing in an age of a degree of economic and social uncertainty, migration being problematised and migrants being demonised, ” he said.

And that was happening in this country.

Immigration reforms in 1986 and 1987 had opened up New Zealand’s migration, and it was now one of the most diverse countries in the world.

“We do have concerns about the way in which we believe migrants do not mix,” he said.

“We need to have a way in which we talk about these issues and in which we encourage integration and social cohesion.

“We have seen a playing out of some of the international debates in this country, and I think we should be aware of that particularly in the wake of the 15th of March this year in which the U.N. contact was specifically referred to on the shooter’s firearm.”

National’s International Affairs discussion document published after Christchurch in May did not mention the promise to pull out of the Compact. And Bridges appears to have gone silent on the issue.

That may be just as well.

Labour has the power; National has problems