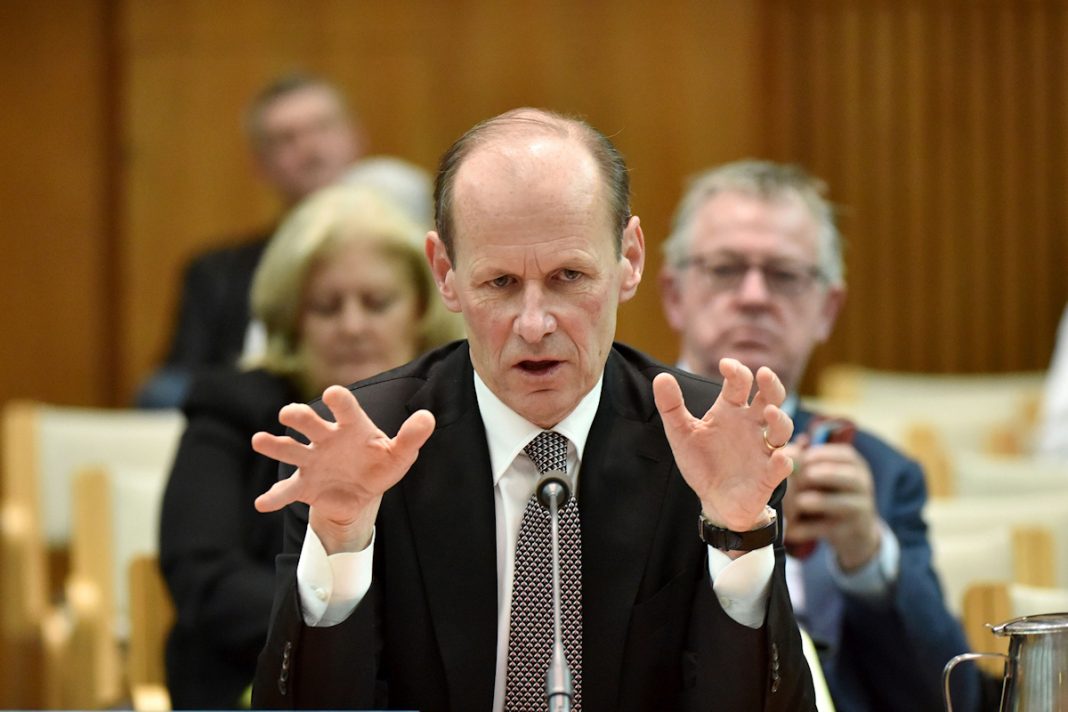 The Reserve Bank pulled back from the brink of a full-on confrontation with the trading banks yesterday and moderated the requirements for them to hold additional capital to call on in the event of a banking crisis.

The relief was apparent across the road in the Beehive.

“I think it’s really important that there’s been a good consultation process, and the Reserve Bank has modified parts of its proposal,” said Finance Minister Grant Robertson.

“What I think is really important now is that both the trading banks and the Reserve Bank work together to ensure we get back to what this is really about, which is the safety of New Zealand as money in the bank.”

Speaking to journalists on his way into Parliament’s debating chamber yesterday afternoon, Robertson said there had been a long consultation process.

“There have been changes.

“It’s now time to get on with the job of implementing them.”

Asked if he had input into the Bank’s decision, he said he had plenty of conversations with the Reserve Bank Governor and with the team at the Bank.

“I’m confident that I am able to have that dialogue.

“But I don’t believe it would be responsible for me as the minister to be asking to make prudential decisions like this.”

Nevertheless, the Bank’s decision could have profound economic implications.

The critical decisions, which start to take effect from 1st July 2020, include banks’ total capital increasing from a minimum of 10.5% now, to 18% for the four large banks and 16% for the remaining smaller banks.

The average level of capital currently held by banks is 14.1%.

The Reserve Bank originally proposed a five-year phase-in, but that has now been extended to seven years.

Reaction from the Banks themselves was much more moderate than when the proposals were first released, and the ANZ threatened to pull out of New Zealand if they were implemented.

Yesterday the ANZ said it estimated that the proposals would cost it $A3.0 billion by July 2027 (based on ANZ’s 30th September 2019 balance sheet).

The Banks has already retained $1.5 billion of its New Zealand profits in anticip[ation of the Reserve Bank’s move.

ANZ Chief Executive Officer Shayne Elliott said: the announcement provided the certainty required to prepare its business for the future.

“While the increased capital requirements remain significant, the consultation was thorough, and the concerns of industry were given a fair hearing.

“We remain aligned with the RBNZ’s objective to ensure a sound and efficient financial system in New Zealand. “

“We have been planning for these changes since the original consultation. Given the extended transition period and our strong capital position, we are confident we can meet the higher requirements without the need to raise additional capital,” he said

It was the ANZ reaction which was most closely monitored in the Beehive.

Not only is it New Zealand’s biggest bank, but its chair is Sir John Key, and if there was going to be a political backlash it was feared the Bank would be the source of it.

Instead the politics came from two industry organisations; BuusinessNZ and Federated Farmers.

BusinessNZ called for a further round of consultation on the decisions.

“Imposing additional requirements on banks will adversely harm their customer base, and the costs of reducing risk will be passed on to businesses, households and rural borrowers,” he said.

“The Reserve Bank has taken on board some of the concerns of the business community in respect to the timing of the proposed change, like extending the period for banks to reach the new capital requirement over seven years rather than the five years.”

However, while the Reserve Bank has undertaken a cost/benefit analysis, there has been no chance for interested parties to have input.

“Given the significance of this on consumers, households, businesses, and the rural sector that will ultimately bear the brunt of increased costs and/or restrictions on capital. a further round of consultation is needed.”

Farmers have been at the sharp end of the lobbying campaign by the Banks against the proposals with many being told that either their mortgage interest rates would have to rise or that they may have to repay their mortgage principle.

Last week Federated Farmers released the results of their six-monthly survey of farmers’ opinion of banks. They found that In the last six months, farmers’ satisfaction with banks had continued to erode, and the number of farmers who felt under pressure from banks had risen from 16% to 23%.

“While most farmers remain ‘satisfied’ or ‘very satisfied’ with their banks, the number giving those ratings have slipped from 71% in May this year to 68% in our November survey,” the organisation’s economics and commerce spokesperson Andrew Hoggard said.

“That’s the lowest since we began the twice-a-year surveys in August 2015.”

The Reserve Bank is forecasting that the changes will add 0.2% to interest rates. That would work out at an additional $7666 on an average farm mortgage of $3,833,000.

But Federated Farmers is sceptical that it will be that small.

The impact on farming is likely to be much higher,” Hoggard said.

“This is because there is less lending competition in the agricultural sector, and we know banks are already looking to reduce their exposure to farm debt. Banks have been putting the squeeze on farmers even before today’s announcements.”

Robertson was adamant that farmers should not have to pay extra.

“I want to make it really clear that I don’t believe there’s a justification in what’s being proposed for there to be a blow to rural communities,” he said.

“They do very well here.

“There is no need for a particular sector to bear the brunt of this.”

The Bank’s decision to raise the capital requirements has its origins in the Global Financial Crisis of 2007 -08.

As the GFC unfolded, the New Zealand government introduced a guarantee scheme that covered up to $133 billion in deposits and investor funds.

By the time the scheme was withdrawn, the Crown had paid out approximately $2 billion to depositors for losses from failed entities

But though the Government was lucky then, the thinking at the Bank has been that it cannot always rely on luck and there is the possibility that one day it could be required to deliver on that sort of guarantee if there were to be a major banking crisis.

The Banks has published its “workings” to arrive at a forecast of a major banking crisis approximately once every 55 years.

The Bank’s regulatory Impact Statement says that when a bank fails, there is a possibility that the Government may bailout creditors.

“In this case, a bank bailout transfers costs from one group (creditors) to another (taxpayers), and leads to additional costs in the form of interest costs to cover extra government borrowing and/or economic costs from higher taxes.

“In effect, this can be seen as similar to an implicit subsidy to banks.”

That is the core reason that the Bank has imposed the increased capital requirement for the trading banks.

National’s Finance spokesperson, Paul Goldsmith, issued an almost ambiguous statement which appeared to accept the Bank’s reasoning but argued that there would still be short-run costs to the economy.

“The costs are certain and, in some cases, are already being felt; the benefits may or may not be gained in 100 years’ time,” he said.

That’s both the problem and the beauty of the Bank’s announcement yesterday; it will not have any real impact for some time and therefore will not be able to be evaluated for some time.

Government goes into emergency mode to deal with Coronavirus

But wait — there may be more

Robertson and Fletchers to talk Ihumatao