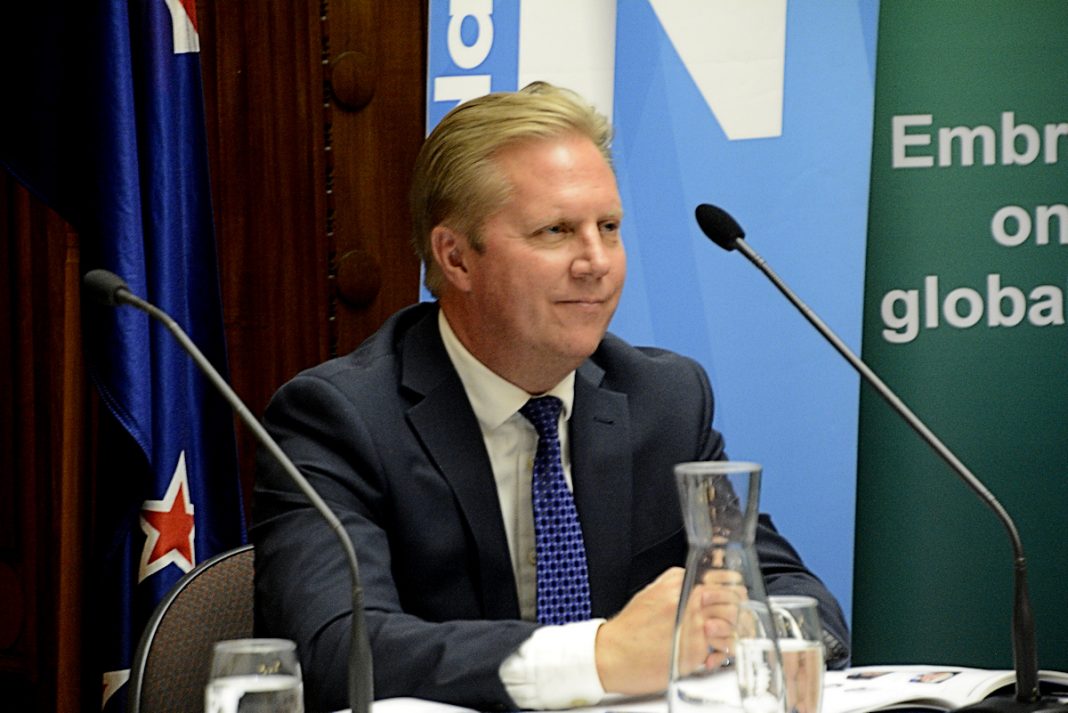 A Parliamentary Committee has come down hard on former National Government Minister Todd McClay effectively accusing him of being a party to allowing foreign interference in a New Zealand election.

The same Committee report contains a revealing insight into the level of bitterness felt within National over NZ First’s decision to form a Government with Labour.

But it was all part of a ti-for-tat political battle on the Justice and Electoral Committee which had renegade former National MP, Jami Lee Ross at its centre.

Ross blames McClay for leaking details of his frustrated ambitions within the National Party before his resignation from National in October last year.

Labour persuaded Ross to effectively cross the floor of the House, and allow himself to be  drafted on to the Committee on the Government side during its review of the 2017 election.

That included allowing him to draft the section on McClay and the National Party donation.

The Committee agreed to do this after National MP, Nick Smith, insisted the Committee consider allegations about the fundraising activities of the NZ First Foundation.

All of this happened over the last two or three weeks so none of the allegations was able to be tested in a public hearing.

The report sets out the details of Ross’s allegations about the Inner Mongolia Rider Horse Society (NZ) Ltd Government members are concerned about the circumstances surrounding the involvement of a which is “owned by a China-based entity and controlled by a Chinese foreign national.”

“ We also note that Inner Mongolia Rider Horse Industry (NZ) Ltd carries out the business of exporting horses to China from New Zealand,” the report says.

“Government members believe it is noteworthy that a former Minister (alleged to be Todd McClay)  less than a year before the donation was received, met with the founder of Inner Mongolia Rider Horse Industry (NZ) Ltd, Mr Lang Lin, in China in July 2016.

“The former Minister has been quoted in the media as saying the local electorate meeting was where Mr Lang indicated “that Inner Mongolia Rider Horse Industry (NZ) Ltd would like to support the National Party”.”

The Committee’s report says it believes this activity was s alarming because the former Minister had ministerial responsibility for policy interests of a foreign national that the former Minister then had discussions with regarding electoral donations.

“ It is impossible, without further scrutiny of the flow of funds, for the public to be satisfied that Inner Mongolia Rider Horse Industry (NZ) Ltd was not simply a transmitter for a foreign donor, rather than being the true donor utilising funds derived within New Zealand,” the report says.

“ We do not believe the National Party or a former Minister in the previous Government has met the spirit or intent of the Electoral Act’s restrictions on foreign donations.

“We further note the apparent foreign interference in New Zealand’s democracy whereby a Minister has involved himself in the procurement of donations through discussions with a foreign national that has direct interests in the policy area that the Minister has responsibility for,” it says.

National responded with a terse one-paragraph statement: “National notes that the matters were not raised in submissions and this material was tabled at the Committee at midday on 5 December 2019 with no opportunity for a reply or response. We note that this donation was disclosed, unlike the issues with New Zealand First, where no specific donations were declared for Election 2017.”

That was clearly a theme put to the Committee by National’s Electoral spokesperson, Nick Smith.

In a section on “National’s View,” the report echoes the often-repeated suggestion by National MPs that they were cheated out of Government.

“National notes that a significant historic aspect of Election 2017 was that, for the first time under MMP, the largest party in Parliament and the party with the most votes did not get to form the Government,” it says.

“This decision was made by Rt Hon Winston Peters and NZ First opting to form a coalition government with Labour and the Confidence and Supply Agreement with the Greens.

“ Given the significance of this decision, the transparency of NZ First’s financial backers in Election 2017 is important.”

National said it was concerned about two aspects of NZ First’s financial returns.

“The first is a declaration of a $73,000 loan from the NZ First Foundation.

“It was the only party to declare a loan, and the public has no transparency over the source of this funding.

“National also believes it is noteworthy that the president of NZ First resigned on 3 October 2019 citing his refusal to sign off financial reports for moral reasons. “

National then details the refusal of the Committee to meet with former party president, Lester Gray and the former treasurer, Colin Forster.

National said it viewed Labour members as compromised because they were only in Government “as a consequence of these goings-on.”

However, the Committee’s report does propose that the Electoral Commission get some enforcement teeth.

It proposes that the Commission be given “investigatory, enforcement, and sanction powers”.

“ We recommend providing the Electoral Commission with powers to:

Major breaches of electoral law would remain with the Police.”

The Committee also endorsed a recommendation from a UK Parliament Select Committee which would designate all internet platforms as “tech companies” and which would require that they act against harmful or illegal content on their sites.

“There is now an urgent need to establish independent regulation,” the UK report said.

“We believe that a compulsory Code of Ethics should be established, overseen by an independent regulator, setting out what constitutes harmful content.

“The independent regulator would have statutory powers to monitor relevant tech companies; this would create a regulatory system for online content that is as effective as that for offline content industries.”

The New Zealand report includes a number of other recommendations which effectively seek to level the playing field between legacy and digital media over the accountability for political advertising.

The Committee also proposes that foreigners be banned from advertising to influence a New Zealand election though they do not say how that could be enforced.

Though Justice Minister Andrew Little has introduced some limited legislation to take up the Committee’s recommendations around political advertising and foreign donations, it would seem doubtful that any of the rest will be in force in time for the next election.

In August, Little told “Newshub Nation” that he doubted  doubt whether being about to report by the end of the year “is going to be enough time to get meaningful change so that we can provide a level of assurance about the integrity of our democratic systems that New Zealanders expect.”

That means that many of the recommendations will now sit on the shelf till after the next election and after another inquiry into that election.

When it comes to electoral reform, talk and point scoring is about as much as we might expect.

Exuberant reception for Ross and Te Kahika in Tauranga

Luxon takes off and the Nats wonder what is next