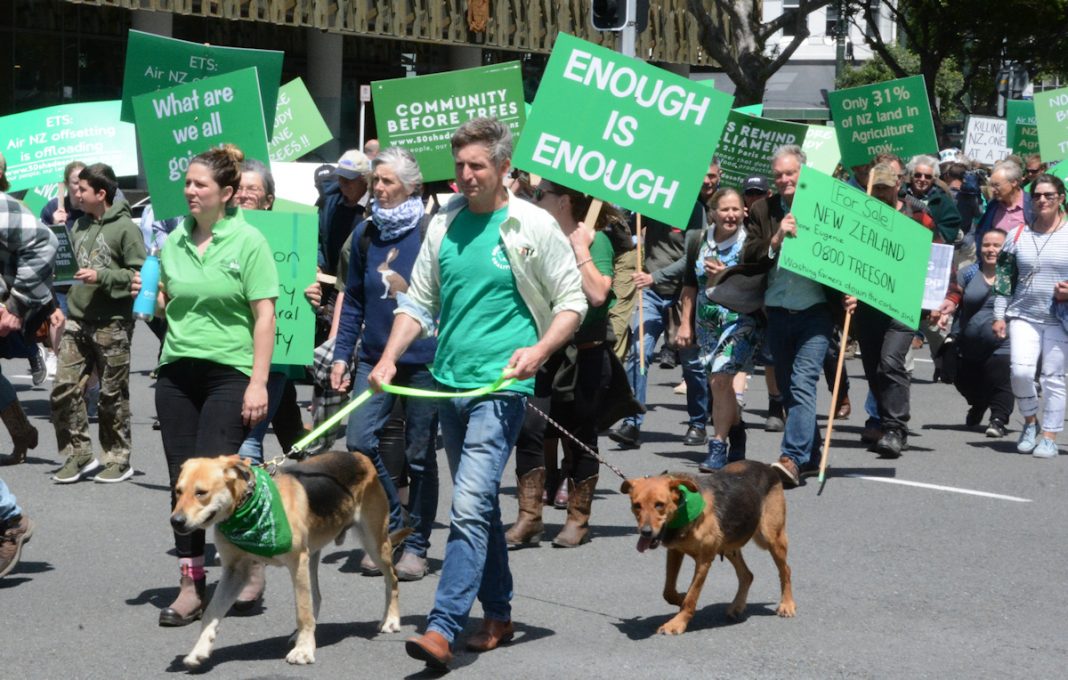 Forestry Minister Shane Jones is working on major changes to the one billion trees programme.

This comes after a vocal farmer protest movement set up to oppose productive farmland being converted to forests.

The movement, “Fifty Shades of Green”, organised a protest march and rally at Parliament last month.

Jones, after addressing the protesters, famously then called them “red necks” to journalists.

But he is now clearly taking their protests seriously.

The Minister’s proposals come with the news that a 1600 ha Wairoa hill country property, Te Puna Station, has been sold to Drylandcarbon,  a consortium of overseas investors and New Zealand entities including Air New Zealand, Contact Energy and Genesis Energy, for conversion to forestry.

The attraction for the companies is the Emission Trading Scheme credits they will get to offset their emissions. (Genesis burns coal at its Huntly power station.)

But the Wairoa district has also been the home of a lot of the protests against Jones’ one billion trees programme.

However, the latest sale contains a number of concessions to the protestors.

Only 1065 hectares will be planted in pine trees; 271 will be allowed to regenerate native bush, and an existing Manuka plantation of 80ha will be retained.

The remainder of the land will continue to be farmed, but even so, the total number of stock on the property will be well short of the 9500 stock units running there at present.

Jones told POLITIK that he thought the proposal for a mix of farming and forestry and native trees was a positive harbinger for the future.

And it got a lukewarm but not entirely hostile reception on the 50 Shades of Green Facebook page.

“While this is progress but still not a great for provincial NZ,” it said.

“ Hey, but that said let’s take their talk and rhetoric as a win.”

Jones concedes that farmers in the Hawkes Bay are getting “hoha” (fed up) with his billion trees programme, so he is planning with Agriculture  Minister Damien O’Connor to hold a seminar there early in the new year to discuss the issues.

“We will get the antagonists, the protagonists together, not purely from Wairoa, but from similar communities, and take some recommendations or options to the other Cabinet ministers,” he told POLITIK.

“We want to avoid a situation as our forestry footprint spreads that we don’t lessen the burden that might fall on a smaller number of farmers wanting to keep the rural community intact. “

A key issue that has sparked the protests is that the land is covered in trees is not just marginal erodible hill country like Te Puna but also high-quality flat land.

So Jones has called in former Olsen’s CEO, Peter Clark, to come up with proposals on how to confine the trees to marginal land.

“I’ve asked him to come up with some modifications as to how we can confine forestry to the areas that are of marginal agricultural value and lead the productive land in the hands of the cockies,” he told POLITIK.

Jones said he regarded Clark as one of the people in the country most knowledgeable about forestry.

He will work with the CEO of Te Uru Rakau and “guide” Jones, O’Connor, David Parker and James Shaw in the development of the policy.

“And we will take options back to cabinet as to what can we do to get the balance right so that we see more positive outcomes where farming continues, but we expand the footprint of the forestry sector, both native trees and exotic trees,” said Jones.

There is also an issue developing over whether planted forests should be harvested or left to stand as permanent forests.

That is the intention of Dryland at  Te Puna.

But Jones wonders whether permanent exotic forests are in the interest of rural New Zealand.

“A lot of the cockies are very doubtful about exotics being turned into permanent forests,” he said.

“I think a lot of them accept that although their ancestors cut down the native forests, that there is a place for permanent native forests.

“However the processers and manufacturers of the forest sector are very agitated that we don’t incentivise massive permanent exotic plantations.

“They would rather these plantations remain available at 35 years to be harvested.”

“But Drylandcarbon shares concerns that better pastoral land should be retained for farming and that only certain land is suitable for forestry,” he said.

“This is a great example of getting the balance right and planting the right tree in the right place,”

The company is ambitious and is planning further purchases.

“We are committed to land acquisitions, and carbon farming partnerships with farming families that protects jobs on productive pastoral land drives environmental improvements from economically marginal land and provides an opportunity to provide stable income streams for rural families and communities.

“We will continue to look for and develop win-win solutions that see suitable marginal land planted and productive land retained and farmed for the benefit of our economy and rural communities.”

The Government is obviously taking the 50 Shades of Green protests seriously with Climate Change Minister James Shaw meeting them this week as well.

Along with the positive comments made by the Prime Minister at Dairy NZ recently, it seems the Government is mending is intent on mending its rural fences.

Countering populism in the provinces with a look back to 1935