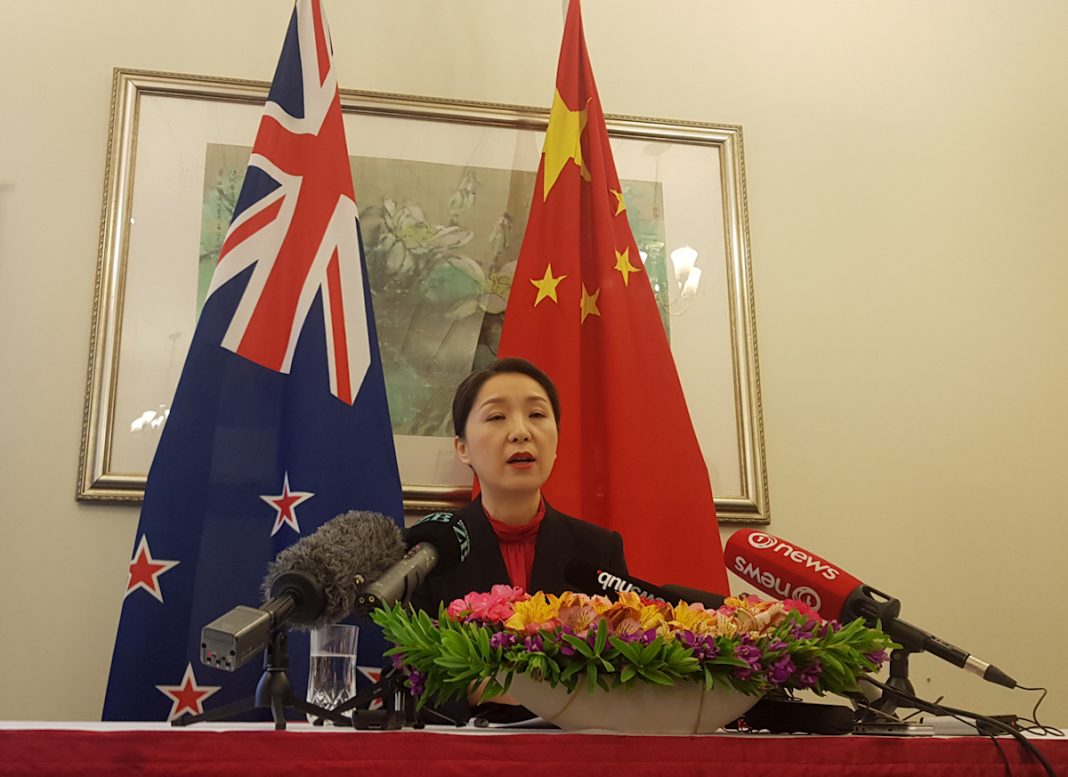 The Chinese Ambassador’s media briefing on the coronavirus yesterday was an unusual enough event in itself, but buried within it were more than a few hints that New Zealand’s response to the virus is placing the relationship with China at risk.

Perhaps mindful of that, later in the day, Health Minister David Clark, at the daily Ministry of health briefing on the virus, stressed that New Zealand was reviewing its travel ban on people from China every 48 hours.

“None of these decisions has been taken lightly,” he told the briefing.

“We’ve been very careful to make sure that we have in place a 48-hour review.

“We don’t want these restrictions in place any longer than they need to be.”

But the Ambassador, Wu Xi, said the ban should never have been implemented.

“Should the travel limit have been imposed in the first place?” she asked.

“You see the World Health Organisation (WHO) as the most professional and authoritative international organisation overlooking global health has clearly recommended that there is no need for any limit on travel and trade.”

In a statement on January 27, the WHO advised that measures to limit the risk of exportation or importation of the disease should be implemented, “without unnecessary restrictions of international traffic.”

Nevertheless, most countries in the South-East Asian/Pacific region have implemented travel bans.

POLITIK understands New Zealand officials are particularly sensitive to the possibility that if the disease entered New Zealand, it could spread to the Pacific Islands in a repeat of last year’s measles epidemic.

China’s Ambassador to Tonga, Cao Xiaolin, last week reminded Tongans of New Zealand’s role in this in an op-ed on the Matangitonga website.

It is clear that Wu sees the travel ban as a test of the China-New Zealand relationship.

“Both China and New Zealand are strong supporters of multilateralism and the function of the multilateral institutions,” she said.

“So as member states, we should have respect for and follow the recommendations made by an international organisation like the WHO.

“We have already seen an impact on our bilateral cooperation and  I hope this impact will be short term instead of medium-term or long term.

“I believe in such a challenging time that it is always a test for every government’s ability of governance.

“On the one hand, we need to make proper arrangements for the prevention and control of the epidemic.

“And on the other hand, we need to assess how big the risk is in order to have a balanced policy, in order to minimise the impact on the people to people exchanges and our trade.

Wu quoted a Chinese proverb which said: “when in prosperity, friends know us, and in adversity, we know our friends.”

She also referred to the 2009 H1N1 flu pandemic which saw 17 confirmed cases in New Zealand. But it was much more severe in China.

“In that  epidemic, the infections were 60 million people with a thousand deaths (in China),” she said.

“ And the actions taken by the government here were not to impose any travel limit.

“So compared with that, now in a lesser situation with a lesser risk, why should the response be tougher?

“Why should the tougher measures be imposed in this case.”

The suspension of airline flights from China to New Zealand yesterday caused NZ Post to cease accepting mail for China. But there are concerns that the inability to ship goods to New Zealand from China could impact into Trade Me.

POLITIK understands that the ODESC and Treasury Watch Group monitoring the overall impact of the pandemic are building a more coherent picture of the economic impact — and by all accounts, it is big.

Dr Clark  seemed to acknowledge that when he said: “This is having quite an economic impact, this disease.”

“ And of course, we’re mindful of New Zealand’s economic interests.

“But first and foremost, we’re looking out for the health and safety of New Zealanders.”

However, he said he didn’t think the travel ban had impacted the New Zealand – China relationship.

“ I think the relationship is good,” he said.

“We’re making sure that we are in touch with them regularly.

“And of course, we’re moving in step with many other countries here, but we are an independent country.

“So we are reviewing the scientific evidence.

“And if we see the opportunity to lift restrictions because we think there’s a reduced risk or any other reason that we might lift those restrictions, then we would do that.”

At the same time, there have been reports of some anti-Chinese sentiments being expressed around the country.

Labour MP Raymond Hou said the coronavirus had become the number one issue among the local Chinese community both for efforts to ensure the safety of family members and for the incidents of racial abuse it was bringing.

Answering questions from a Chinese journalist based in New Zealand, Wu agreed that there had been some cases of xenophobia in the response of some New Zealanders to the pandemic.

“We need we need to look at why we have seen some discrimination of xenophobia,” she said.

“I believe part of the reason is maybe lack of accurate information.

“So that’s why I want to have a press briefing to release the most accurate and up to date information.

“And the fact is the epidemic is generally under control because of our extraordinary efforts and the statistics show that the number of confirmed cases has been declining in a rapid way for 13 days.”

Wu still expressed her faith in the China-New Zealand relationship.

“I believe we have a solid foundation on our bilateral relationship,” she said.

“ And I hope that with our joint efforts, we will be able to respond more effectively to the epidemic so that we can join our forces to find a proper way to prevent and control this epidemic.”

That “proper way” would presumably include an end to the travel ban.

This is only the start of what may be a testing year for New Zealand’s relationship with China.

It looks unlikely that the Prime Minister will accept the invitation to visit there in the first half of the year which has been sitting on her desk for some months now.

And there is likely to be increased lobbying from Huawei after the UK agreement for them to participate in that country’s 5G rollout – a decision which has provoked strong criticism from Australian MPs and the White House.

But the closed border with our largest trading partner is already having a large economic impact; it will be that factor even more than the need to maintain the China-Newew Zealand relationship that is likely to see an early end to the travel ban.

Army and police to show no tolerance

The ghost of Michael Joseph Savage

Tuesday: make or break for Ardern and Robertson