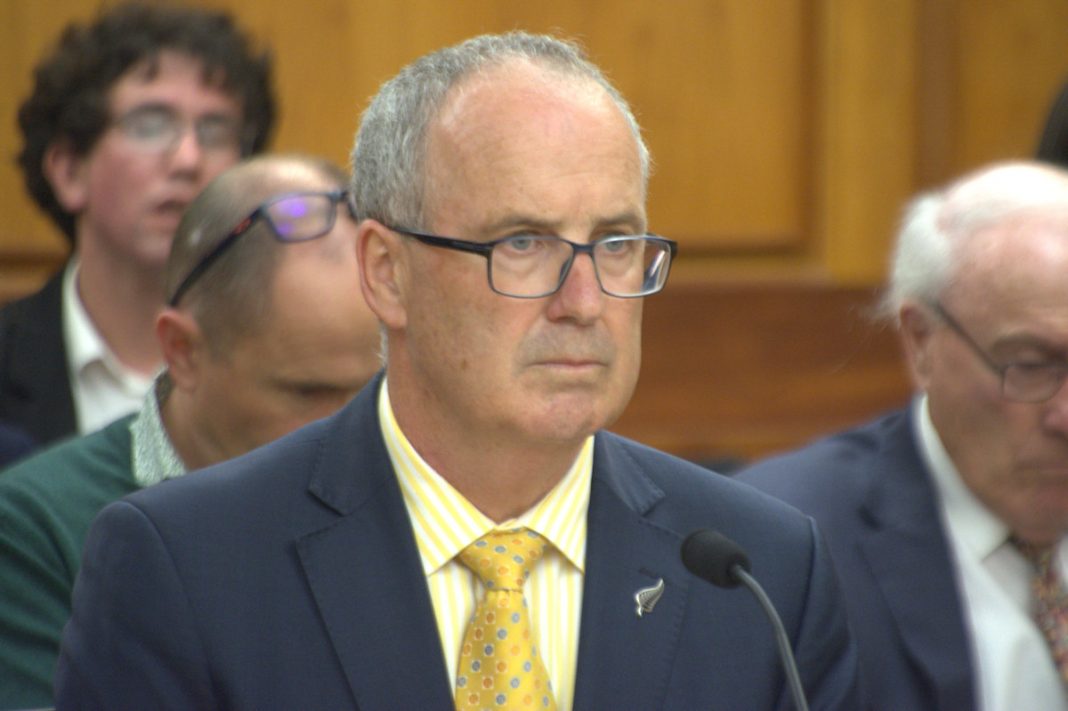 The events that led up to the “resignation” of the Auditor General in 2017 are now being re-examined by a Select Committee.

They are not pretty, and former Prime Minister, Sir Geoffrey Palmer says they are a constitutional disgrace and have set a precedent for removing high offices of state.

Martin Matthews was appointed Auditor General in November 2016 and was asked for his resignation by-then Speaker, David Carter, eight months later in August 2017.

But Matthews had been Secretary of Transport when Joanne  Harrison defrauded the Ministry for $750, 000.

Prompted by continued media and Parliamentary revelations about Harrison’s activities at the Ministry, in May 2017, the Offices of Parliament Committee commissioned a report on his term as Secretary of Transport and how he had managed the fraudster.

The Committee, which is chaired by Speaker Trevor Mallard, finally released that report yesterday and it is damning.

It was that report which persuaded the previous Parliament’s Committee (of which Mallard was a member) to agree that Matthews should go.

But Matthews has petitioned the Committee to review its actions, to consider paying him compensation for damage to his reputation and unfair treatment and to consider whether any law changes might be needed to “afforded appropriate protections” to the offices of Parliament.

Yesterday’s meeting was the first public session to consider that petition.

As a measure of how important this case is considered within Wellignton, the Committee room’s public seating included eminent constitutional lawyers, Sir Geoffrey Palmer and Sir Kenneth Keith along with a former Clerk of the House, David McGee, the former Speaker, David Carter and, the former CEO of the Department of Prime Minister and Cabinet (and author of the damning report) Sir Maarten Wevers,

What has excited this level of interest if the question of whether Parliament has the right to simply sack an Officer of Parliament. There are currently three; the Auditor General, the Ombudsman and the Parliamentary Commissioner for the Environment.

They are supposed to have a similar level of independence to Judges, but unlike Judges, they do not have an independent process to consider any complaints against them.

What concerns the constitutional experts (like Palmer and Keith) is that if the Speaker can simply ask for an Officer’s resignation, that has the potential to erode the independence of the offices.

But as the release of the Wevers report showed, Carter and the previous Offices of Parliament Committee had considerable ammunition to use to question Matthew;’s suitability for the role of Auditor General.

Wevers concluded that Marthews’ arrangements within the Ministry of Transport for dealing with audit and risk were substandard; the governance of the Ministry was not robust, and Mr Matthews’ leadership lacked rigour.

“Mr Matthews has been unwilling to accept accountability for what had happened,” Wevers said and nor did Matthews acknowledge the fraud issue sufficiently or provide information that was relevant to his application when he applied for the Auditor General’s job.

“ Mr Matthews did not formally advise his successor of what had happened, nor did he share with staff the situation confronting the Ministry before he left,” the report said.

“Mr Matthews does not seem to appreciate the impact that his handling of the fraud had on his staff at the Ministry, nor the risks presented by this history to the Office of the Controller and Auditor-General.”

Wevers set out a timeline which showed that Mathews was first alerted by senior staff in the Ministry as early July 2013 about concerns they had about Joanne Harrison.

He dismissed their concerns until finally the fraud was revealed in April 2016.

Wevers concluded that throughout the period of Harrison’s employment at the Ministry, questions were raised repeatedly by senior managers about her behaviour and her failure to follow required procedures.

“Ms Harrison’s fraudulent behaviour would have been prevented had the Ministry’s internal controls been upheld and not subverted by Mr Matthews’ misplaced trust in a senior colleague,” Wevers said.

“ As the previous Controller and Auditor General has said, ‘trusting staff is not a fraud control’.

“Mr Matthews rated Ms Harrison as a top performer and has stated that he trusted her.

“His failure to take proper account of his own senior staff’s legitimate concerns and advice relating to Ms Harrison can now be seen to be an ongoing error of judgement.

“The consequence of this failure was expensive for the taxpayer.

“He let his staff down, as he did the public service and his Minister.”

Mathews appeared before the Committee with his lawyer, Mary Scholtens, to challenge Wevers’ report.

He argued that the tip-offs and concerns that he got about Harrison prior to the fraud being uncovered were not evidence of fraud but rather her failure to comply with Ministry procedures.

“On three occasions over two and a half years, matters were raised with me about Harrison not fully complying with our procurement policies,” he said.

“The email trail, which is extensive and the facts show that I dealt with accordingly.

“I sought explanations and information.

“I accepted her explanations and undertakings to comply.

“I dealt with her as I would any other person in such circumstances.

“To be clear, there were never any allegations of fraud made to me.”

But the previous Committee did not accept that explanation, and former Speaker David Carter was given the task of advising Matthews that Parliament had lost confidence in him because of the way he had handled the Ministry of Transport fraud.

By the first half of 2017, with news of the fraud now public, there were media and Parliamentary questions about Mathew’s suitability to be Auditor General.

David Carter told the Committee that consequently Mathews came to him and asked him to appoint an independent person to review his suitability for the role as Auditor General.

Carter then quoted from a letter Wevers received from Matthews after he learned of Wevers’ appointment.

“I am pleased that you will be doing the review,” he wrote.

“I trust and respect your judgment.

“I will stand or fall as comptroller and auditor general on the outcome of this.”

Carter also gave the Committee a chilling explanation as to why he had not made Wevers’ report public.

A member of the Committee had heard from friends of Matthews that his mental health was fragile.

“The words suicidal were used,” he said.

“And on that basis, the Committee decided not to table and release the particular reports.

“We felt they would be of more damage to Mr Matthews.”

However, Carter met with Matthews to discuss the Wevers report and told him that he could resign then or the following day a motion of no confidence in him would go before Parliament.

But he did so reluctantly, as he told the Committee yesterday.

“There was little discussion and no explanation of how I had lost the confidence of Parliament or indeed how I was seen to be disabled,” he said.

“I was given six hours, six hours to decide whether to go voluntarily or be removed by a resolution of the House.

“That would have been an outright lie.

“I resigned with a gun held to my head.

“I resigned because the alternative was unconscionable.

“I resigned because I could not allow such a corrupt action to be executed in me and the office.”

Matthews’ QC, Mary Scholtens, told the Committee that her client’s central complaint was that he was denied natural justice during the preparation of the Wevers report.

Matthews himself presented an impassioned account of the impact of the whole business on him.

“My career has been destroyed, and whatever the outcome of this petition, it will never be fully restored,” he said.

“The cost to me and to my family of Parliament’s actions have been very substantial indeed.

“And to be frank, they will endure for the rest of my life.

“I have had to sell out forever family home because I’ve been unemployable; a place we built, a place where our children grew up;  a place where we had so many memories; something we will never get back,” he said.

“I also had to cash in my retirement savings to meet the costs of defending myself.

“I am not the person that so many people have portrayed me to be.”

But there is more to this case than simply the impact of it on Martin Mathews.

Former Prime Minister and Constitutional scholar, Sir Geoffrey Palmer, in evidence before the Committee argued that once he had been appointed, “Mr Matthews was entitled to the extraordinary protections that exist for sound constitutional reasons.

“The Committee cannot undo an appointment to which such a high statutory test obtains simply by deciding it had done the wrong thing in making it.

“There is no suggestion that Mr Matthews had been in neglect of duty while in office.

“And that is the only statutory test the Committee could legitimately investigate.”

Sir Geoffrey’s evidence is adamant that the decision to effectively fire Mathews was wrong.

“The Parliament has done grave damage to a highly qualified officer of state and wrecked his career?” he said.

“It has set a constitutional precedent for an expedient way of removing high officers of state that takes away from them the necessary protection that Parliament itself enacted.

“It was a constitutional disgrace and Parliament should rectify the wrong that has been done.”

The Committee’s consideration of the petition is proceeding with a potential lineup of witnesses including a retired Judge and legal academics.

It is shaping up to be one of the most significant Committee hearings this year.

Firing the Auditor General (not easy)