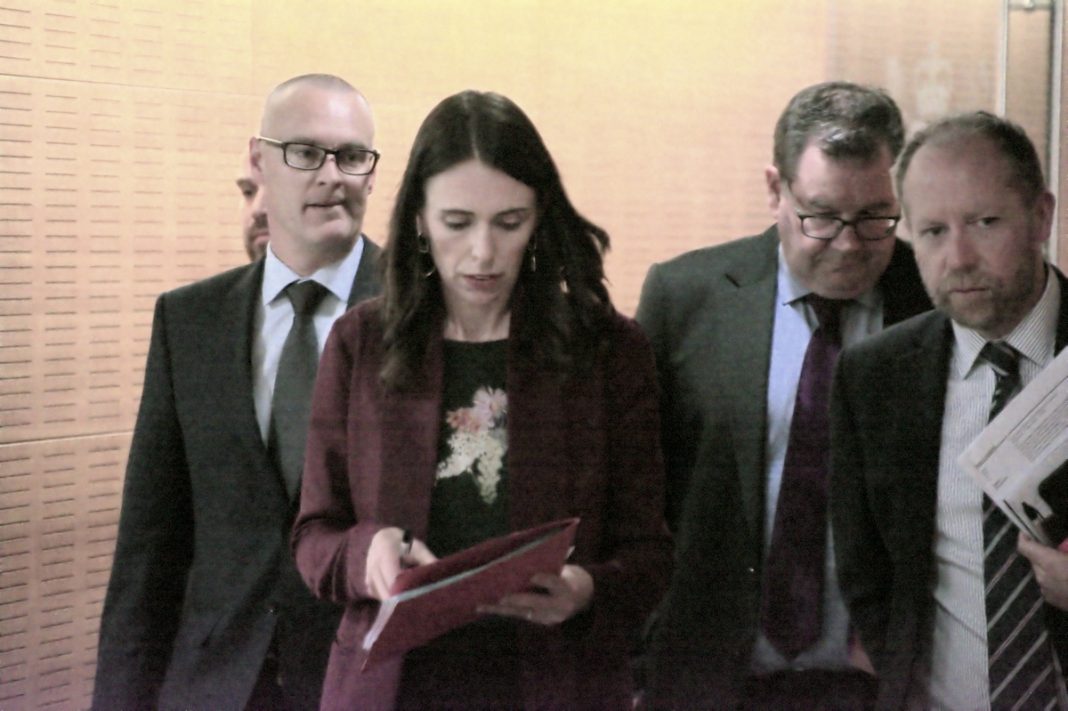 The Prime Minister led her coronavirus response team into the Beehive theatrette last night with the apparent intention of reinforcing the idea that the Government is in control of the coronavirus crisis.

The body language said determination and the message was “keep calm”.

She focussed on travel bans and advisories and stressed how much technical advice the Government was getting. the emphasis was on how tough the restrictions were; travellers from Italy must now “self-isolate for two weeks, and she advised that  those with underlying health concerns should reconsider taking an overseas cruise at this time.”

But there was a problem across the Tasman; the Australian Government was announcing measures while Ardern’s Ministers were still holding committee meetings.

The Australian Prime Minister, Scott Morrison,  told Sky News  117,000 apprentices at a cost of $A1.3 billion would be supported by the Federal Government to ensure there were few job losses at small firms with 20 or fewer employees.

And the Australian also announced a $A2.4 billion health plan to fight coronavirus.

Asked whether New Zealand would do something similar, Ardern said: “I absolutely expect that we will see further investment in ongoing public health campaigns and so on.”

And though on Monday she said yesterday’s Cabinet coronavirus sub-committee (which she chairs) would prepare what she called “the business continuity” package she said yesterday that it would be finalised at Monday’s cabinet.

However, Finance Minister Grant Robertson is dues to speak today to the Wellington Chamber of Commerce and is expected to focus on some of what will be in the package in that speech.

His problem now is that the economic challenges he faces just keeping on getting worse.

He now readily concedes that the effects of the coronavirus will last through to the end of the year.

”But it evolves every day,” he told POLITIK yesterday.

“The first of those (challenges)  is obviously coronavirus, and it’s spread and the effect that that has not only on our export markets and what we import but on global confidence.

“But bear in mind we also have a drought issue as well that we’re dealing with. “

Add to this list the potential impact of the fall in oil prices, which will affect the US and Russian economies.

“So all of those things combined here, they certainly present challenges for us.

“The scenario planning we’ve been doing is really important because it allows us to move through those if that’s where we go.”

Robertson is speaking today to the Wellington Chamber of Commerce and plans to expand on these issues in that speech.

The Minister is coming under some criticism from National over what they argue is the tardiness of his response to the crisis.

irusSopeaking ion Parliament yesterday, National’s Finance spokesperson, Paul Goldsmith acknowledged that the Government had announced that it would be coming up with a business continuity package.

“They’ve indicated some form of a wage subsidy to businesses directly affected, and it absolutely should be targeted to those businesses,” he said.

“Our point on that is that we think the Government should move with more urgency because those businesses have been under pressure now for a number of weeks.

“We know that it’s complicated, but we just encourage the Government to move swiftly in this area because we worry that the window of opportunity to save jobs is closing and we need to move fast.”

Robertson replied with a strong defence of Labour’s management of the economy which, he said, meant it had the fiscal room to cope with the crisis.

“Most businesses understand that right now we’re in the phase where it’s targeted responses that are needed, tailor-made responses that deal with the industries, the sectors, and the regions who are facing the brunt of this,” he said.

“At the same time, we plan.

“We plan for the possibility that this may go on longer, that the impacts may cut deeper.

“We are ready for that, and we have the fiscal space to deal with it.”

The underlying message from both Ardern and Robertson was to present a calm face to the electorate.

There is a clear Government strategy to try to avoid provoking any panic like the supermarket buying seen over the weekend.

But there are growing worries.

The tourism sector is in deep trouble; many of its operators are under capitalised small businesses without the resources to withstand a prolonged absence of tourists.

The Government will be leaning heavily on the banks to try and see many of these operators through.

There may be a campaign to encourage domestic tourism.

At the other end of the scale is Air New Zealand, which like most airlines around the world faces big losses.  Ministers believe it can manage provided domestic and trans-Tasman travel keeps up.

There are still fears that the virus might spread rapidly and comprehensively across the northern hemisphere, particularly North America.

That would see Robertson have to activate his worst-case scenario, which essentially assumes the entire world goes into recession.

He has been almost continuously in meetings or on the phone with businesspeople and other economic leaders since last week.

Though the economic damage is already evident, the Government might be able to take some comfort from the fact that yesterday was the fourth consecutive day with no new cases of the virus.

Even so, the crisis is far from over yet.