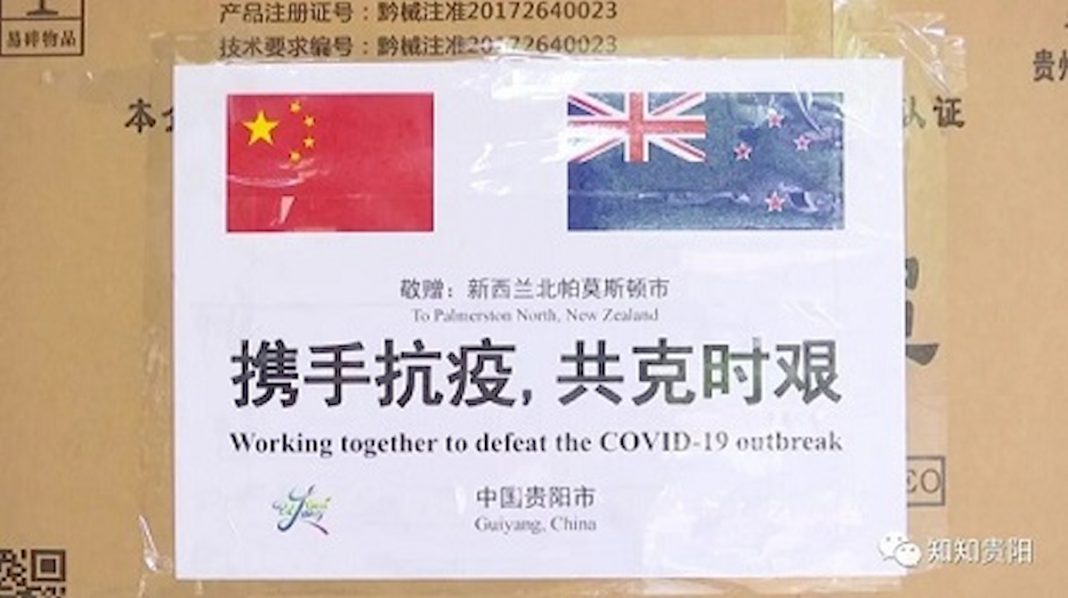 China is sending medical supplies to New Zealand to assist the country’s fight against the Covid-19 virus.

And New Zealand Chinese groups have also organized for supplies to come to the country.

China’s Ambassador to New Zealand, Wu Xi, in an exclusive article for POLITIK has announced that the shipments are to be made.

“The Chinese government has been in close cooperation with the New Zealand government to facilitate commercial cargo flights to transport loads of medical supplies to New Zealand,” she said.

“Chinese communities in New Zealand are also making a real contribution to fighting the pandemic here.

“They have been sourcing much-needed medical supplies such as test kits to be sent to New Zealand.

“Chinese friendship societies at both national and municipal levels are actively engaged with their counterparts in New Zealand to provide support.

Asked to comment on it, he said: “Like many governments around the world we are working with other governments to ensure that we have adequate medical supplies now, and into the future.”

China is mounting what some have called a “mask diplomacy” medical aid offensive in Europe and the Pacific.

Chinese leader Xi Jinping has pledged medical supplies and resources for countries ranging from Serbia – whose president called Xi his “brother and friend” – to Italy.

Huawei has offered to donate significant volumes of personal protection equipment to Ireland.

In March, China organized a teleconference with medical experts in China and health officials from ten Pacific countries.

The city’s official website says this reciprocates the assistance that Palmerston North gave during Guiyang’s efforts to prevent and control the COVID-19 outbreak at the beginning of this year.

The Ambassador’s article comes as New Zealand stands by for a decision today on whether it will move from Level Four to Level Three — presumably in a week’s time.

She said Cabinet would need sufficient data from a range of sources including testing and surveillance and from public health experts along with statisticians and modellers to conclude that Undetected community transmission was unlikely.

That would include knowledge that there was sufficient rigorous and rapid case identification and contact tracing with search capacity available in the case of an outbreak.

Complicating that is a report on contact tracing by Wellington-based Otago University Infectious diseases lecturer Ayesha Verrall which is said to be highly critical of the Ministry of Health’s contact tracing.

Ironically, Verrall was a Labour candidate for the Capital and Coast District Health Board at last year’s local body elections.

She would also require certainty that our self-isolation, quarantine and border measures were robust and adhered to.

“And finally, that there is capacity in the health system more generally, including the workforce, ICU capacity plus the availability of PPE for those for whom it is recommended,” she said.

“Alongside that, we will look at the evidence of the effects of the measures on the economy and on society and more broadly, public attitudes towards the measures and the extent to which people and businesses understand, accept and overall complying with them.”

Peters made it clear yesterday that the question of the economy is critical for New Zealand First.

“The secret is that we keep a sense of balance,” Peters told NewstalkZB yesterday.

“In other words, it would be of no value if we save a lot of Covid people in our approach – and yet during it, we’ve got all sorts of things like depression, suicide, breakdowns and a whole lot of other social things having far greater social damage.

“In the end, the only thing that’s going to save lives isn’t just medical expertise – but an economy that’s capable of providing the utilities to face the crisis.”

But Ardern is winning increasing admiration for her leadership of New Zealand over the crisis.

For example, a front-page story in yesterday’s “Financial Times” is headlined: “Arise, Saint Jacinda, a leader for our troubled times.”

“The main point is not just that she is caring and outwardly normal,” the FT says.

“She is also clearly competent at a time when so many others are not.”

Ardern and the Director-General of Health, Ashley Bloomfield, will announce the decision on whether to move to Level Four at a press conference this afternoon.

“It’s going to be a hard call”