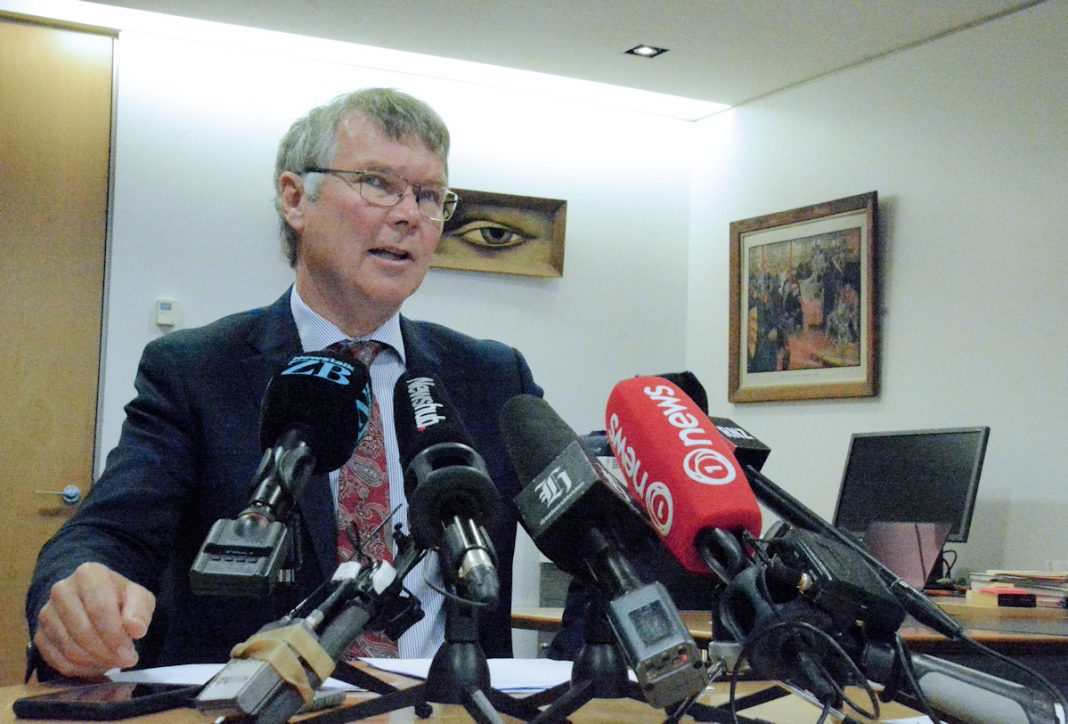 There are plans to rush the proposals through Parliament.

And then there will be more to come with changes to the Building Act and the Public Works’ Act; all designed to make it easier to get infrastructure projects off the ground.

The objective is to get the construction industry working at full capacity, thus providing jobs for the hundreds of thousands of New Zealanders expected to become unemployed as a consequence of the Covid-19 lockdowns and border closure.

Parker has been smart with his proposals; they maintain basic environmental principles and objectives while eliminating the often-ponderous hearings and appeal process, which takes place under the RMA.

The architect of the RMA, Sir Geoffrey Palmer, described what Parker is proposing as a “green National Development Act.”

That was a reference to Sir Robert Muldoon’s National Development Act from the 1987 – 84 era which paved the way for the “Think Big” projects.

But whereas Muldoon allowed 28 acts of Parliament to be suspended by Cabinet, without any substantial justification for any national development project, Parker’s proposal is much more limited.

And importantly, it requires that environmental considerations be taken into account.

In an explanatory note, Parker’s office said: “The Minister for the Environment will determine which projects will enter the fast-track resource consenting process for public and private-led projects, with reference to criteria, and with projects named through Orders in Council.

“Designations for public assets and infrastructure can also be part of this fast-track process.

“The resource consent applications for these projects will be processed by an Expert Consenting Panel.

“Once a project is referred to the Panel, there is a high level of certainty the resource consent will be granted.

“The Expert Consenting Panels will be chaired by a current or retired Environmental Court Judge or senior lawyer.

“Appeal rights will be limited to points of law and/or judicial review to the High Court, with one further right of appeal to the Court of Appeal.”

The CEO of the Environmental Defence Society (EDS), Gary Taylor, who heads an Auckland-based project involving the EDS, the Employers and Manufacturers Association, the Property Council and InfrastructureNZ, which is working a prototype for a new RMA, said the new legislation would not be about motorways.

“Projects that will assist transitioning to a low carbon economy should be prioritised.

“The Minister for the Environment will have a gatekeeping role for projects to enter the fast-track: the criteria he must use should be released and should follow advice from the Climate Change Commission.”

Infrastructure Minister Shane Jones, on the other hand, welcomed Parker’s move and suggested it could open the door for a number of projects that might have had difficulty getting consent under the RMA.

He said that when the chair of Crown Infrastructure Partners, Mark Binns, went to the to the industry to get their feedback on the massive building programme the Government is planning he was quickly told that unless the Government “dealt to” the Building Act and the RMA, the projects would quickly gather dust.

Jones aid work was continuing on reforming both the Building Act and Public Works Act which would be relevant to the infrastructure building programme.

But Jones sees yesterday’s proposals as only the beginning.

“During the election campaign, I can promise you that New Zealand First is going to campaign to allow the legalisation of trout farming in New Zealand and to expand our reach into the ocean to allow the farming of salmon and other types of fish,” he told POLITIK.

Resource consents for aquaculture have been particularly controversial, and the EDS has opposed moves to expand salmon farming in the Marlborough Sounds.

Trout farming inevitably ends up being opposed by angling and tourism interests, particularly from the central North Island.

But Jones is claiming support for the proposal.

“Every Maori tribe has been in contact with me during my time as Provincial Minister, and they see enormous opportunities in farming trout which is no different from farming salmon,” he said.

“But Covid means that the vested interests who want to change, their power is now disappearing.

“We need to provide the platform so new jobs can come from innovative thinking and trout farming is right up the top there.”

If Jones’ support was always likely, the views of Sir Geoffrey Palmer were likely to be less predictable but, arguably, even more important.

Sir Geoffrey has been a fierce defender of the legislation he initiated, particularly Part Two of the Act which defines its “purpose and principles”.

In 2017 he worked with the-then National Government’s support partner, Peter Dunne, to obstruct radical proposals to amend Part Two by requiring that economic considerations should be balanced against environmental requirements.

And back in the 1970s and 80s as a Labour MP, he led the fight against Muldoon’s National Development Act.

But yesterday he described Parker’s proposal as a “green National Development Act”.

Palmer argues that the RMA has become weighed down by constant amendments which made it almost unworkable.

There is a big black economic hole coming.

“It is important to keep things moving, and I can see the political imperatives behind that.

“And you have to remember that Mr Parker is the Minister for the Environment he is not an environmental vandal at all.

“So he is the one who has to approve the projects, and  they won’t get on the fast track unless he does.”

Palmer is also heartened by the rights of appeal within the legislation (there were none in the National Development Act) and also the inbuilt unset clause which will see it expire in two years, but he is concerned that there may not be sufficient Select Committee scrutiny of it.

“There are checks and balances here,” he said.

“And of course, the Bill has to be introduced.

“One of the problems with the sort of situation here is that the Parliament is passing a lot of law very quickly and you have to be very careful about that to get it right.

“It would be good if they could have a few days of scrutiny in front of the Select Committee.”

POLITIK understands that the Bill will be introduced with the Budget legislation on May 14 with the intention that it is law two r three weeks later, which would suggest only a week of Select Committee hearings.  Usually, Select Committees allow at least four, usually six, weeks to consider a Bill.

“We suggest that the Bill should go to a select committee for quick scrutiny,” he said.

“On a number of key points, like the weighting of Part 2 matters, the drafting will be critical; we’d like an opportunity to critique the actual bill.”

But Palmer probably got to the nub of the Bill when he said that overall  “it will have the capacity to provide a lot of employment quite quickly.”

That’s the point which may in itself, longer-term, raise questions about where the emphasis in the ongoing process of reform of the current RMA legislation goes.

Parker gets around the RMA to rev up mattress factory