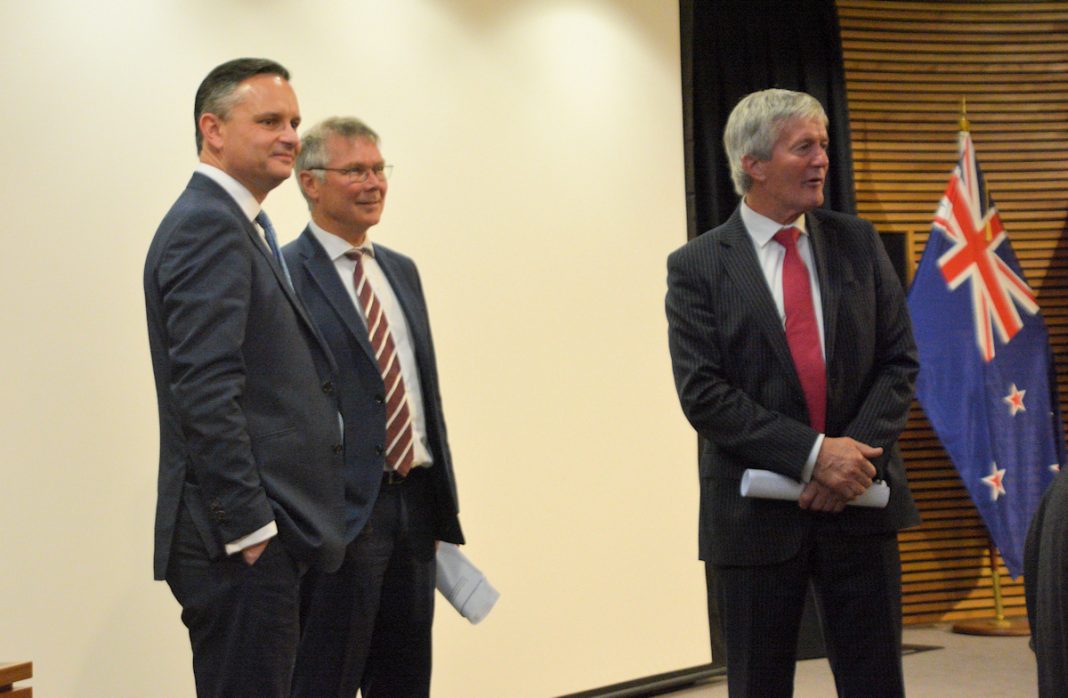 Now the limits are likely to be assorted out over the next year on the advice of officials rather than the Science and Technological Advisory Group. (STAG)

STAG included the hardline environmentalist Mike Joy, but it could not reach a consensus on what the limits should be.

Parker has included two new additions to the policies proposed last September; a 190 kg/hectare limit on nitrogen fertiliser and a $700 million fund to assist with riparian planting and other environmental measures. That fund is a post-Covid-19 addition and is designed to create jobs.

But though the whole question of freshwater reform has been a massive issue for the party’s farmer base, National could find nothing to complain about, avoiding asking Parliamentary questions on the issue or even issuing a  press statement.

NZ First, on the other hand, were happy to claim that they had been responsible for the changes announced yesterday by Parker.

In turn, Parker respected that NZ First’s political courtyard was the provinces and rural New Zealand, he said.

But Jones was also keen to point the finger at Mike Joy.

“Quite frankly it’s time for these predictable and anti-farmer personalities to go away and become genuine academics as opposed to activists.”

Agriculture Minister Damien O’Connor conceded at the launch yesterday that there had been a strong farmer reaction against the original proposals.

“The uncertainty and the assumption that what was a discussion document was going to be implemented was driving some of that pushback, in my view,” he said.

“The certainty and the changes that have made this more doable, I think will be enthusiastically embraced by most farmers.

“Not all, I’m sure, but that certainty is the most important thing.”

The key certainty is over the dissolved nitrogen limit. The discussion document proposed that this be 1 mg/L, but Dairy NZ said that could see total milk production by 2050 fall by 24 per cent and all national exports by 5.2 per cent or $8.1 billion.

As reported by POLITIK on Wednesday, the limit is to be reconsidered over the next year.

But given the inability of the STAG group to reach agreement on a limit, Parker was proposing another way of solving the problem.

“One of the suggestions that has been made by environmental groups, which I thought was a helpful one, was that perhaps the way through this is to for the Ministry for the Environment and the Ministry for Primary Industries to devise lookup tables as to what’s an appropriate level of dissolved inorganic nitrogen depending on the catchment, the stream and various other factors,” he said.

This is what a lot of local government and farmer groups have proposed all along; that the eventual solution be on a catchment by catchment basis taking account of the vast difference between things like “hard” and “soft” bottomed waterways. (A hard-bottomed river is one with a gravel bed whereas a soft bottomed one has a foundation of mud).

“It’s quite a complex matter because these things do vary a bit around the country and it’s hard to write a universal rule that’s effective without overregulating some parts of the system,” said Parker.

Nevertheless, he supported the decision to essentially park the dissolved nitrogen measure for a year.

“So the fact that the scientists weren’t able to come to a conclusive position on that makes it basically impossible for us to put something in place.”

The new (yet to be decided) limits will be part of a compulsory planning process which will implement the yet-to-be-promulgated 2020 Freshwater Naitonal Policy Statement.

Councils will develop regional water plans by 2024 and there will be a new Chief Freshwater Commissioner (a sitting or retired Environment Court judge)who  will oversee freshwater hearings panels made up of freshwater commissioners, council and tangata whenua nominees.

The freshwater panels will make recommendations, and the councils will make the final decisions on them.

Farmers will, however, have plenty of time to implement the changes. Parker yesterday said 2050 could be a target.

“But there are other catchments that we can get there earlier than that.

Underpinning this will be farm environmental plans which will be made mandatory under an addition in the Committee stages to the Resource Management Amendment Bill currently before Parliament and which will be rolled out in a staged process from this year.

Stock will need to be excluded from waterways with fences to be at a minimum of 3m from the waterway though existing fences can stay in place.

Dairy cattle and pigs must be excluded by 2023; beef cattle and dairy support cattle and deer by 2025 and sheep will remain excluded from the provisions.

Most of that has survived the process (with some minor modificaitons0 from the original discussion document, but in what may be a nod to the Greens, Parker has now imposed a mandatory 190kg/ha per year limit on nitrogenous fertiliser.

The Greens have always proposed a nitrogen input tax to control nitrate runoff into waterways, but Parker and Labour have rejected this.

Up until now, that resistance has seen any input restrictions avoided as well.

But to avoid input restrictions or taxes requires that farmers are able to measure their nitrate outputs and they do this through a computer programme called “Overseer” which models runoff from their paddocks.

But a report by the Parliamentary Commissioner for the Environment, Simon Upton, last year called it an imperfect tool.

“It’s still not quite fit for purpose,” said Parker.

“And I think that if we can’t scrub that up, by the time that we get to water plans, there’ll be some agitation for another method of monitoring or controlling what these outcomes are.”

That would mean restriction or a tax on inputs.

That would raise more questions about farm economics though both Shaw and O’Connor put the argument that cleaning up our rivers could enhance the attractiveness of our primary products overseas.

But Parker has made it clear that the drive to make rivers swimmable is a deeply personal one driven by his own love of tramping in Otago and Southland.

“I’m someone who swims in rivers,” he said.

“I love rivers, and I love wetlands.

“You know, there are so many people in this room really here because they feel this.

“And I’m determined that we turn this around so that my children can swim in the rivers that I used to swim in.”

That is how it will be portrayed on the election campaign, and it was perhaps the proximity of the campaign that added both urgency and a willingness to compromise which allowed Parker to pull back on the dissolved inorganic nitrogen target.