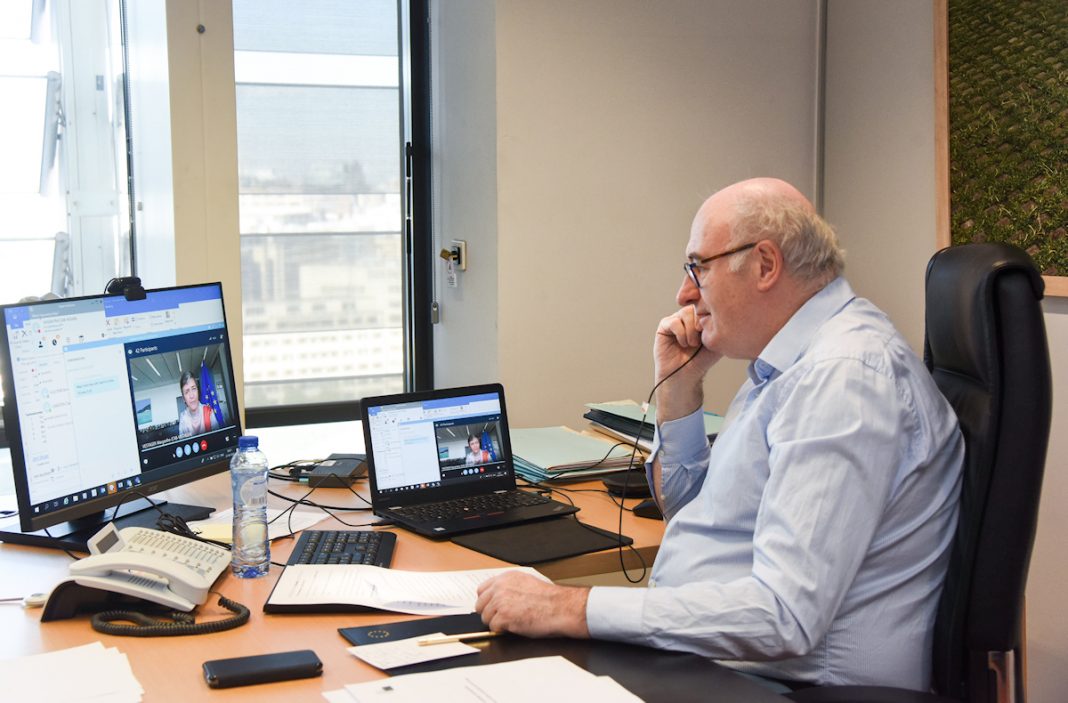 Relations between New Zealand and the EU appeared to reach a new low yesterday as Trade Minister David Parker complained that he had learned of the EU’s latest offer on a free trade agreement from a leak to a dairy industry trade publication.

Parker dismissed the offer itself as unacceptable.

Clearly angry, he phoned his EU counterpart, Phil Hogan, last night to complain both about the leak and the offer.

However, neither he nor his office was willing to make any comment on the outcome of the call.

POLITIK understands there may be a response from Brussels today.

The dairy proposals have been kept secret because of the political sensitivity surrounding the dairy industry in Europe.

The eighth round of negotiations on the free trade agreement are due to resume next week, and the EU offer leaked out last week.

“It is a very negative signal, especially at a time when we are working together in the World Trade Organization and elsewhere, encouraging countries not to be protectionist and to ensure trade can flow freely between us,” he said.

“For New Zealand exporters to face such an unlevel, uneven playing field in the European Union is really unacceptable.”

Details of the EU offer have now appeared in a number of European publications.

Part of the problem lies in the way the Europeans are trying to impose on New Zealand a division of what used to be the Tariff Rate Quota for butter and cheese exports to what was then 29 EU member countries.

Since Brexit Britain and the EU have arbitrarily divided that quota between themselves.

New Zealand does not accept the division,  however the Europeans use it as the base of their offer to New Zealand.

The EU says that New Zealand dairy exports to Europe in recent years have been much lower than even its existing quotas.

Last year it sent only 2028 tonnes of cheese yet under the offer Parker is complaining about, New Zealand’s quota would rise to 15,000 tonnes in 10 years time.

European critics say that is because New Zealand prefers to send its exports to Asian markets.

But Fonterra has argued that the EU imposes hefty bureaucratic non-tariff barriers which make it uneconomic to send exports there.

New Zealand wants those barriers gone along with increased quotas.

There is thus an argument here that the export figures quoted by the EU are artificially depressed.

And Parker said that the EU quotas would also be subject to highly prohibitive tariffs.

“This is not a workable way to conclude our long-running negotiations,” he said.

“Currently, the EU has a two to one trade surplus in goods with New Zealand.

“As a country, we cannot afford that situation to remain.

“It is clear that the EU will need to address this imbalance.

“I ask how else post-Covid would New Zealand maintain a social license for trade? “

There are other elements to the negotiations.

The EU wants to stop the use by New Zealand dairy companies of so-called “geographic indicators” like “feta” or “camembert”.

Fonterra told MFAT this was its key defensive concern.

“A restrictive agreement in relation to Geographical Indications would have a negative impact on Fonterra’s business in New Zealand,” its submission said.

POLITIK understands New Zealand has emphasised that it will only agree to the EU’s request to protect geographical indications if it is satisfied with the market access it receives from Brussels, for dairy and other products.

It was clear from Parker’s speech and a subsequent Q+A yesterday that he is frustrated with the EU offer.

“We’re one of the last liberal democracies in the world not to have a free trade agreement with the European Union,” he said.

“And if what we’re seeing from this leak is correct then it’s a derisory offer which just won’t close that agreement.

“I personally think Europe needs this agreement more than we do.

“And they’re not going to get an agreement on those terms because it will be patently unfair.

“And if we can’t get after all these decades of negotiation with the European Union to a decent point, then they might like to think about what the alternatives will be.

“Their trading relationship with New Zealand currently runs in their favour at two to one.

“Notwithstanding that particular hiccup and that negotiation, we continue.

“We don’t give up on these negotiations, and we try to find points that are satisfactory to both sides.”

Negotiations on the agreement were launched in Wellington in June 2018, and then Parker said he hoped they would be completed within two years.

But, maybe, the-then EU Trade Commissioner, Cecilia Malmstrom, was offering a subtle warning about the European sensitivity over dairy products in particular during a press conference with David parker in the Beehive.

“There is a sensitivity in certain areas in Europe in certain products not only vis a vis New Zealand, but in general in trade agreements, we have been very aware of them,” she said.

“I think we have been open to the Minister and his team about where those sensitivities are but of course we enter the negotiations to give and take.”

Parker now wants to see some more giving from Europe.

Parker gets around the RMA to rev up mattress factory