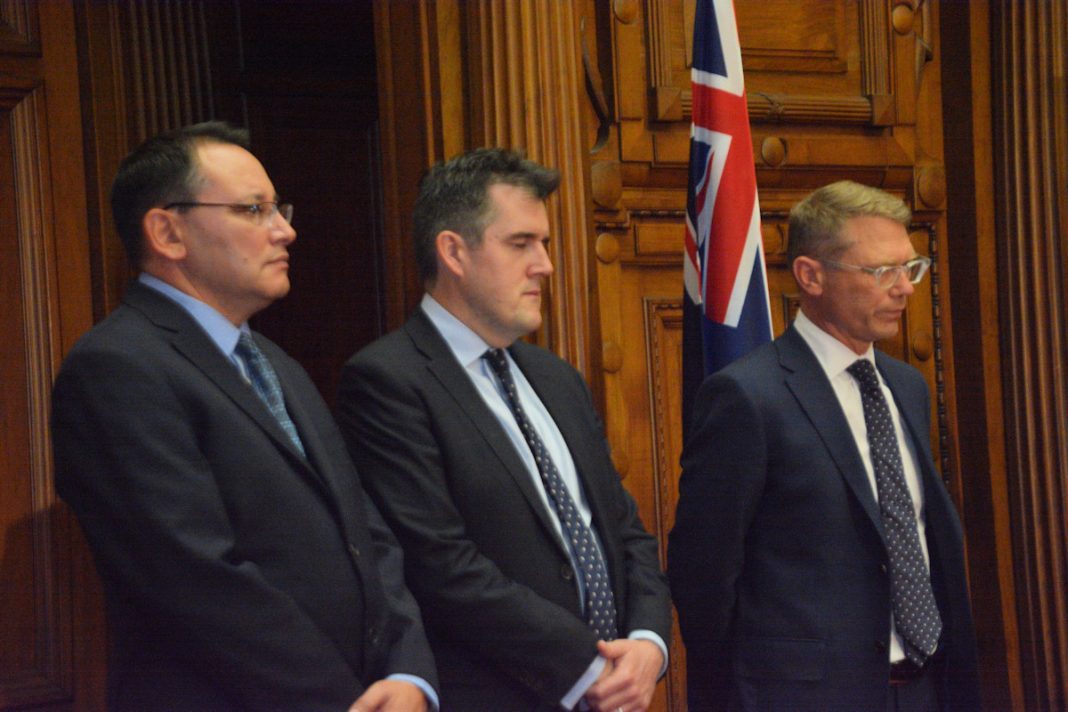 The war of ambiguous words continued yesterday between the Minister of Health and his Director-General.

There is a continuing implication in the Minister, Chris Hipkins’ descriptions of what the Director-General, Ashley Bloomfield, has been telling him that he was misled over how much testing of border and isolation workers was going on.

That has now taken on new relevance with the news that the stepped-up testing has already picked up a new case of Covid-19 apparently unrelated to the Americold cluster.

Reti asked: “When he said on The Nation that he had been told several weeks ago that all staff at Jet Park, Auckland, were being tested weekly, who told him that, and did he receive that in writing?”

Hipkins’ reply: “I was told that by the Ministry of Health, and, yes, I did receive that in writing.”

Stuff reported on Friday that in fact only 130 of the approximately  220 staff at the Jet Park, Auckland’s key quarantine facility,  had been tested for Covid-19 in the past 14 days.

As a consequence Hipkins issued an order requiring all border and managed isolation and quarantine facility staff to be tested by midnight Thursday.

However, Reti, in stark contrast to National’s usual approach to debate over Covid, was conciliatory towards the Government despite Hipkins’ admission which amounted to an accusation that his Ministry had lied to him..

In a statement in response to a Ministerial statement on Covid  in Parliament yesterday from Hipkins, Reti said the Covid crisis was a hard problem.

“Sometimes, in situations like this, with huge complexity and many balls in the air, one of them gets dropped,” he said.

“When that happens, this Opposition will help pick up that ball and put it back in its correct place.

“There will be a time to understand how the ball was dropped, but first we will help put it back, and then we’ll figure out how not to drop it again.”

And the ball appears to have been dropped again with the news that a maintenance worker at Auckland’s Rydges Hotel, used for managed isolation of new arrivals, has tested positive for Covid-19.

How he got it appears to be a mystery, but genomic testing indicates it is linked to an American returnee who, as far as can be ascertained, the maintenance worker had no direct contact with.

But the case begs the question as to whether there are other untested maintenance and other workers from managed isolation facilities who have not been tested but who may have Covid-19.

It has been mandatory for workers at managed isolation facilities to be tested only from last Friday.

The Minister in Charge of Facilities, Megan Woods, said yesterday this made it incredibly difficult to monitor and collect data on who had been tested because some were getting tests for themselves at offsite facilities such as medical clinics.

“Earlier in July, I think around 30 or 40 per cent, of staff at this hotel did have surveillance testing carried out prior to this outbreak,” she said.

“But I would like to point out that surveillance testing was not on site when this individual returned the symptomatic test.

“He was picked up under the new mandatory system.”

But the Prime Minister told Parliament yesterday that Cabinet on July 22 had mandated that all managed isolation and quarantine staff would be tested.

So it took 23 days, nearly a month, for that edict to be put into practice. However, Ardern told Parliament that already nearly 90 per cent of those staff had been tested.

One issue which has frustrated the Beehive has been the inability to know who is being tested away from the onsite testing because there is no ability to match a staff member’s National Health Index number and where they were working,

Hipkins has started to use the new Covid-19 Public Health Response Act to issue orders which make testing mandatory for border workers and others.

It is an offence not to comply with an order and is punishable by a fine of up to $4000 and imprisonment of up to six months.

His first order which was issued last Friday requires that those workers be tested by midnight Thursday.

But he is proposing to issue a second order which will require regular testing of those workers.

“It will specify exactly what what what’s expected there,” he said.

Would that include weekly testing?

“That is exactly what we’re working through at the moment,” he said.

“It’ll be based on a risk-based framework.

“So those at a higher risk will be the most frequently tested.”

Through the lockdown period, the Government could be forgiven for not even considering the need to test border staff.

The Epidemic Response Committee did not discuss the matter at all.

Otherwise, he said on April 14, “I think our testing is pretty good, except that we’re not doing the sentinel surveillance studies, so there could be very important pockets of infection that we wouldn’t be picking up.”

There was thus no apparent urgency to get the border staff tested.

What seems to have happened is that when the Government issued its instruction on June 22 that all border staff be regularly tested, it lacked both the legal powers and the ability to enforce its instruction.

It also seems clear that at best, the Ministry of Health’s reporting back to the Minister was confusing or possibly even misleading.

“My thinking is it probably should be every infection cycle, which is 14 days, two weeks,” he said.

“I think in an ideal world, it will be once every infection cycle, every two weeks.

“But we would do a lot of work behind the behind the scenes to make sure we could actually do that.”

He also indicated National would be proposing an “immunity passport” which would be mandatory for arrivals when the borders open. It would confirm that they had been tested within the previous three days and were negative.

But the Ministry’s testing regime is not the only thing that has been tightened up this week.

The Police have finally started to stop cars from entering and leaving Auckland.

Assistant Commissioner Richard Chambers said yesterday that at 4.00 pm on Monday, Police had processed 69,486 cars through the checkpoints since the lockdown began.

A total of 2205 vehicles have been turned around, a big increase on the 676 reported the day before.

What we are seeing is an all-round tightening up which is perhaps being accompanied by a realisation that we may have been free of cases for 102 days, but we have not beaten it yet.

Nats want to manage Covid like the Christchurch earthquake

A day of salutary lessons