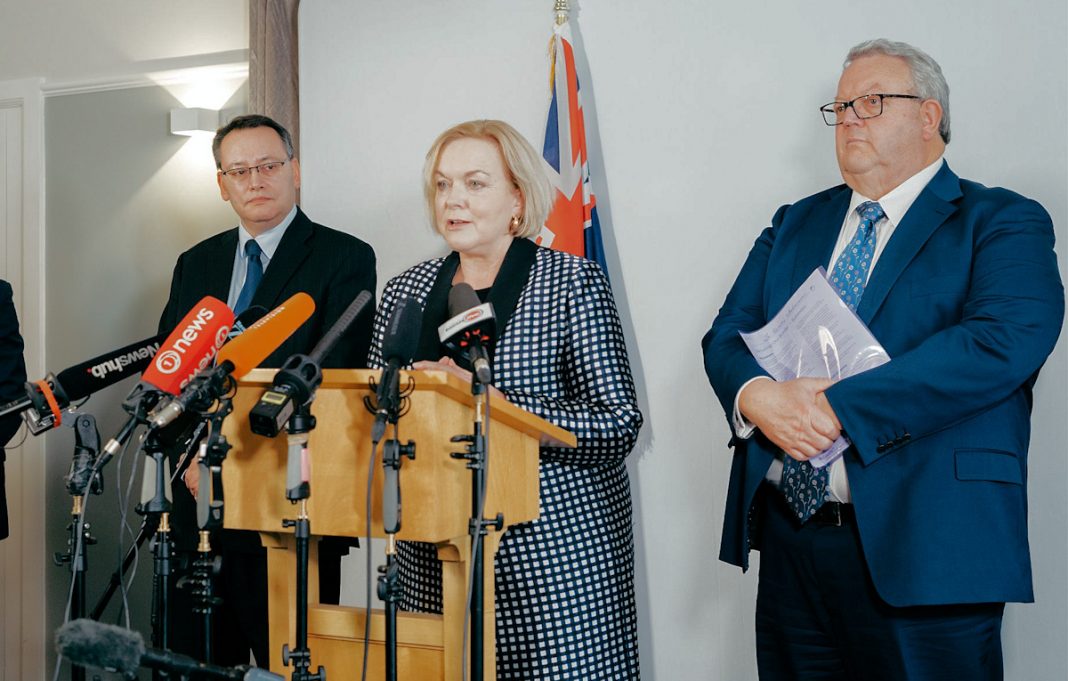 The sheer size of the task ahead of the Government in trying to measure and contain Covid-19 in New Zealand was demonstrated yesterday with the announcement that National would create a Christchurch Earthquake Recovery type plan to manage it.

The party is proposing a stand-alone Government agency to manage Covid.

However, it is not going as far as proposing the creation of a stand-alone permanent border agency covering not just health but all border issues.

It allows the creation of “interdepartmental ventures” that will “allow resources to be brought together into a single distinct entity that will be able to hold assets, employ staff, enter into contracts, and administer appropriations just as a public service department does.”

National’s policy does not acknowledge this but instead talks about establishing “a single Crown Agency to unify the Government response to securing our border.”

In contrast to the inter-departmental ventures, which are temporary structures, the agency, Te Korowai Whakamaru, will be a permanent addition to the Wellington bureaucracy.

New Zealand First is also proposing a permanent border force with its own enforcement staff which would be permanent and would bring together all the agencies operating at the border.

There is already a multi-agency Integrated Targeting and Operations Centre, known as ITOC based in Auckland.

Customs officers working in the ITOC provide national coordination of operational activity, and identify and target risks to the border, here and overseas.

They work alongside colleagues from other agencies including the New Zealand Police, Ministry for Primary Industries, Ministry of Health, and Immigration New Zealand.

But it does not have a health management function.

National are proposing that their Border Protection Agency co-ordinate and manage the potential entry of Covid 19 “and other public health threats.”

National Leader Judith Collins said the agency would report to a single minister.

“Korowai Whakamaru will not replace the current ministry or department but would draw on resources across government,” she said.

.“The agency will scale up and down as streets emerge and abate, staff, working on the border will be seconded into the agency, trained by the agency and responsible to the agency.”

National’s policy proposal has obviously been driven by the difficulties that the Ministry of Health and its Public Health units have got into over delivering the Government’s testing strategy on the border and in managed isolation and quarantine facilities.

Health Minister Chris Hipkins said yesterday that Cabinet had made decisions about what its testing expectations were.

“We have been working with the Director-General of Health and the health system to implement that.

“It is the implementation that has been happening in waves, and it’s been scaling up.

“Would we have liked it to have been faster?

“I think both of us have said we would have liked it to have been faster.”

So why wasn’t it implemented faster?

Bloomfield repeated his claims from Wednesday that rolling out the testing was a complex matter involving a large number of workers and testing sites.

Coordination between the Ministry and District Health Boards, in particular, appears to have been a problem.

“And it required a degree of coordination between the health system, including the district health boards, making an increasing number of teams available to do that, whilst not compromising any other very important testing both in the community and the day three, day 12 testing of the guests (in the managed isolation and quarantine facilities),” he said.

“As the minister said, we were in the process of rolling it out.

“There was testing being done, and of course, it just required more scale-up and more coordination across government agencies to ensure that all the staff who required testing were being rotated through.

“And that’s the planning we are doing now so that it’s sustainable.”

But where National’s plan may create more complications is that testing does not take place only at the border or in isolation and quarantine facilities; there is also testing in the community.

Bloomfield has said this is particularly important at the moment as Cabinet is to meet today to decide the future of the current lockdowns.

Hipkins said the Cabinet would be relying on information right up to an hour before the Cabinet sat down.

“We’ll see what more advice comes in overnight,” he said.

Bloomfield, whose advice will be critical, said a key factor would be the level of testing done outside Auckland.

“That will give us a very good picture about whether there has been spread beyond Auckland,” he said.

“The way I think about it is the extent to which we are confident we have found the boundaries of the current outbreak and in a sense, through our contact tracing, been able to draw the net tightly around it.

“So those are critical pieces of information.

“What the other piece of information that we have to report to Cabinet is that are we confident in our lab capacity and our contact tracing capacity.

“And both of those are in good shape.”

But what is clear is that comprehensive ongoing testing is going to be with us for some time yet — but does it need a new agency to run it.

National changes tack; the “Crusher” is back

How Collins and Seymour are divided