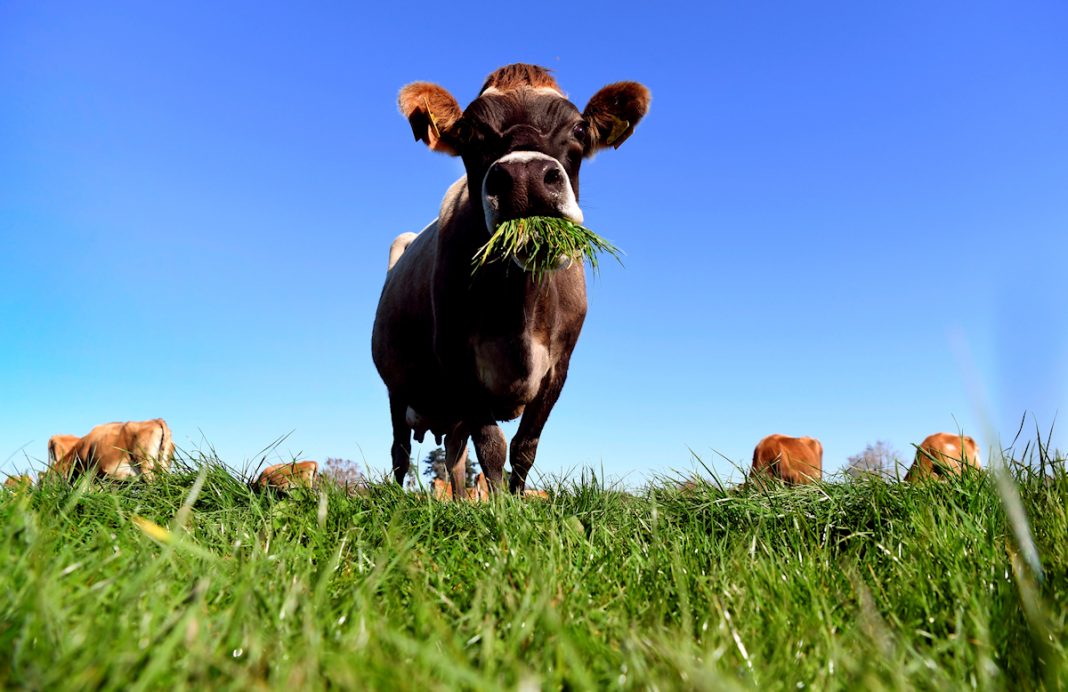 With what is likely to be a  mind-blowing report on what New Zealand’s greenhouse gas reductions will mean in practical terms due on Monday the dairy industry yesterday made a pre-emptive strike designed to show how carbon-efficient it is.

The industry is under fire on two fronts.

On the one hand are the methane emissions from grazing cattle and, on the other, the huge amount of energy (currently mostly coal) used to dry milk in dairy factories.

Both areas will be addressed in the draft carbon budgets due to be released by the Climate Change Commission on Monday.

But Dairy NZ’s report which was produced by Ag Research, though it shows New Zealand dairy cows to be the most carbon-efficient in the world does not take into account the huge energy usage of the dairy factories.

Even so, the report will be an important tool for the dairy industry as it defends the industry’s biogenic emissions when the Climate Change Commission releases its draft carbon budgets on Monday..

At its heart, the study underlines the difference between pasture grazed dairy cows (as in New Zealand, Australia, Ireland, Uruguay) with cattle spending at least part of the year in barns (as in the USA, Germany or the Netherlands)

Though the barn raised cattle produce more milk they also have a different emissions profile and produce much more nitrous oxide, a gas whose contribution over time to the total greenhouse gas tonnage is ten times that of the New Zealand dairy cow gas, methane.

The consequence of this is that New Zealand emerges as the country with the lowest carbon footprint of the 18 countries studied by Ag Research scientists.

There are challenges to New Zealand’s position, particularly from the scale of the conversion of forest to dairy pastures over the past 20 years.

These figures were not included in the calculation of the carbon footprints in the table.

The Ag Research scientists estimate the potential contribution for land that had been converted from exotic forestry (mainly plantation pine) to pasture and used for dairying during the past 20-years was the equivalent of an additional 0.14 kg on New Zealand’s carbon footprint.

That would have dropped New Zealand down from the top of the table to below Uruguay and Portugal to the third-lowest carbon footprint.

But as far as Dairy NZ is concern the real point of the table and its publication yesterday is to try and get in ahead of what starting on Monday will be a national debate on who should cut what to enable New Zealand to reach its Paris Agreement targets.

The first of those is to reduce greenhouse gas emissions by 30 per cent below gross emissions for the period 2021-2030. The Ministry for Environment says this is equivalent to 11 per cent below 1990 levels for that same period.

Dairy NZ CEO Tim Mackle told POLITIK last night that the study simply confirmed what the dairy industry had already known, that New Zealanders were the world’s most efficient dairy producers by almost any measure.

He tweeted: “There are too many cows in NZ causing massive climate and water pollution. Govt needs to cut synthetic nitrogen fertiliser and cow numbers. This latest industry report is a distraction to that.”

But Mackle said if that happened then production would simply shift offshore to producers with a greater carbon footprint.

“Basically the estimates are that over 100 million people globally every day, get what the World Health Organisation has recommended as a daily intake of dairy from us,” he said.

“We’re feeding a lot of people dairy around the world.”

There is widespread agreement within the dairy industry that technology and science can reduce the New Zealand dairy carbon footprint further.

And the production process from the paddock to the farm gate accounts for 85 per cent of the industry’s emissions.

So farmers are highly likely to have technological options in the coming years to help them reduce emissions.

But that opportunity may not yet be available at the processing end of the industry which accounts for 15 per cent of the total industry emissions, primarily through the use of coal to produce heat and electricity to dry milk.

.Fonterra uses half a million tonnes of coal a year and is the second-largest user after New Zealand steel.

The company faces particular challenges converting to electricity in the South Island, and there are reports circulating within the industry that the cost of upgrading transmission lines to cope with conversion right across New Zealand could run into the billions.

Dairy NZ  does not have any direct responsibility for the processing end of the industry.

So can Mackle see a solution?

“Nothing leaps out and smacks you in the face in the sense of finding a solution that ticks all the boxes,”  he said.

“Let’s face it; we will be in a transition.

“So can I see a solution; some dairy companies are moving already, and they have plans, and they’re developing plans.

“But our own commitments have to be grounded in science and in the New Zealand context,” he said.

“Part of that story is that we are, we believe, the world’s most carbon-efficient dairy producers.

“And this is yet another study that confirms that but it doesn’t mean we can rest on our laurels.

“It doesn’t make sense to wind back our production and wind up someone else who’s higher.

“Secondly, because we’re so efficient now, there’s no silver bullet or a switch you can just flick to lower the country’s overall emissions.

“And so on that basis, we need technology.”

This will be very much a theme from the broader agricultural community as the country begins the big carbon debate next week; that lowering agricultural emissions may require new technologies which could involve gene editing.

National Leader Judith Collins has already indicated she would favour movement on those technologies.

This the first albeit pre-emptive response to the Climate Change Commission’s carbon budget dues for release on Monday.

But it won’t be the last.

From the hotel to the cowshed