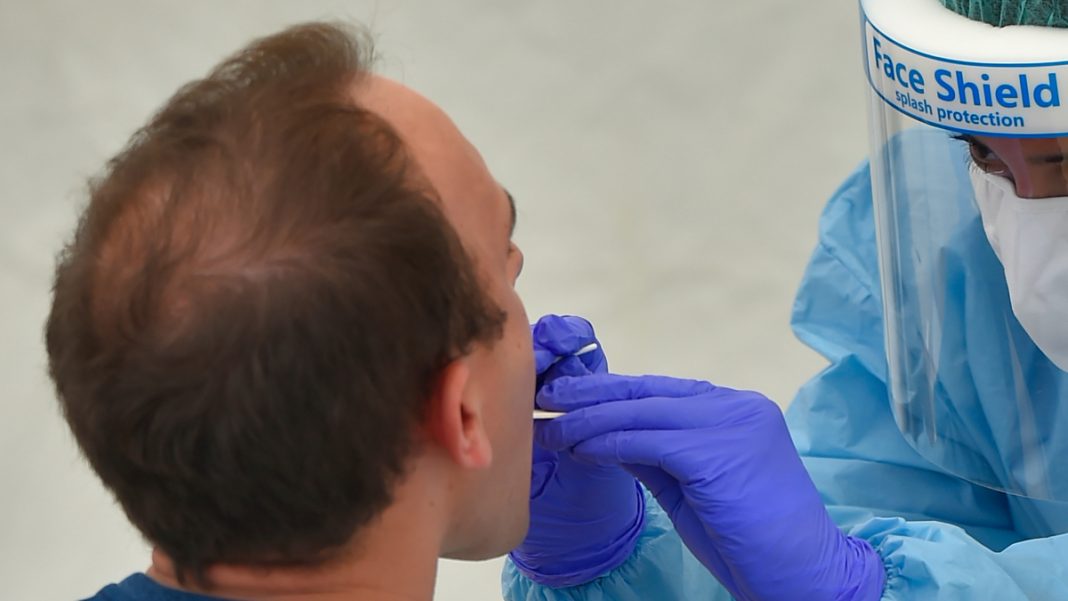 The pressure is growing to have the Ministry of Health approve saliva testing for border workers.

One test, available in New Zealand and currently being trialled by Auckland l Airport staff is claimed to be as accurate as the nasal swab test, and its promoters say it could do 10,000 tests a day.

That would be enough to allow daily testing of border and isolation and quarantine workers.

Early identification of Covid cases would reduce the likelihood of further lockdowns.

And because it can be analysed within hours it would end the long wait for swab tests to be returned.

Currently the Ministry is waiting for results from Papatoetoe High School and South Auckland community contacts of the family at the centre of the Auckland level Three lockdown.

But yesterday at their daily press conference, both the Prime Minister and the Director-General of Health claimed the saliva tests had not yet been proven to be accurate enough.

That is disputed by scientists here, by overseas research and the company promoting the tests.

Eminent Otago University Epidemiologist, Sir David Skegg, is one who says that our current border swab testing regime is not good enough.

“In New South Wales now, there’s mandatory daily saliva testing of everyone who works at the border or hotels which are Managed isolation and Quarantine facilities,” he told Stuff.

New Zealand was doing only weekly testing, which was not good enough.

But the Ministry of Health continues to rely on the polymerase chain reaction (PCR) nasal swab test, widely regarded worldwide as the gold standard.

A New Zealand company, Rako Science, has licenced a saliva test developed by the University of Illinois and says it could do 10,000 tests a day.

The University claims the test is as accurate as the nasal swab test and a paper by a group of the University’s medical and biological scientists concluded that the test was “operationally simple, utilised readily available materials, and can be easily implemented by existing testing sites, thus allowing for high-throughput, rapid, and repeat testing of large populations.”

But Prime Minister Jacinda Ardern said yesterday that there were concerns about the accuracy of saliva testing.

“We have started the use of saliva testing. We’ve done it alongside the nasal swab, the PCR test that we already undertake on a routine basis because there are some question marks over whether or not it has the same sensitivity as a nasal swab,” she said.

“That has  been a big factor for us; that sensitivity; because New Zealand is at a point where it’s not good enough, really to have a tolerance for false negatives.”

But Rako says it is not its test that the Ministry is trialling.

A Victoria University of Wellington molecular biologist,  Associate Professor Janet Pitman, told RNZ Checkpoint last night that she had studied the Illinois test and found it was as accurate as the PCR swab test currently regarded by the Ministry as the authoritative test in New Zealand.

Her report had been given to the Ministry in December.

“In my opinion, saliva testing is an incredibly useful and effective tool to have in their (the Ministry of Health’s)  toolbox,” she said.

“But what I should say is the nasal swab test has done New Zealand very well currently, and it’s allowed us to eliminate covid-19 in our community until very recently, obviously so.

“But obviously there are improvements that we can make.

“And if there are more tools that we can put in the toolbox to fight this thing, then I think that that is something that they should seriously look at.”

POLITIK understands Rako and the Ministry are to meet later this week to further discuss the possibility of the test being widely employed among border and MIQ workers.

Meanwhile, Auckland Airport is using the test on a voluntary basis among its workers.

Mary-Liz Tuck, General Manager Corporate Services, said Auckland Airport wanted to support a programme that would make asymptomatic testing simple and comfortable for airport and border workers while providing the highest standard of protection for the community.

The Director-General of Health, Dr Ashley Bloomfield, said that the Ministry wanted to generate its own data about the accuracy of the test and then see what role saliva testing might play.

But the problem evaluating the tests here was difficult because there were so few cases to measure its accuracy against.

ESR has been evaluating a saliva test, the Yale test, which is being used by Air New Zealand.

But Pitman warned that not all saliva tests were the same.

“So some saliva teeth might very well be not as accurate as the nasal swab test,” she said.

“The Illinois test that I validated for our science is actually as accurate as of the nasal swab test.”

Meanwhile, it seems it was the Ministry of Health who may have been to blame for the surprising decision to place the northern boundary to the Auckland lockdown area at the bottom of the Brynderwyn Hills thus incorporating Mangawhai and Kaiwaka into the locked-down zone.

Both towns are actually in Kaipara and residents were surprised yesterday morning to find a police roadblock at the bottom of the Brynderwyns rather than further south at Wellsford which is actually within the Auckland city boundaries.

The Prime Minister conceded it was an error but was at some pains to absolve the police of any responsibility for it.

“This is not a scenario where it is fair to place blame for this on the police,” she said.

“It appears to have been a very clear miscommunication around what was contained in the order and where the boundaries needed to be, So that needs to be very clear up front.”

If the police were not responsible, then the only other potential culprit would be the Ministry of Health.

And POLITIK understands that it was the Ministry who advised the police to place the roadblock in the wrong place.