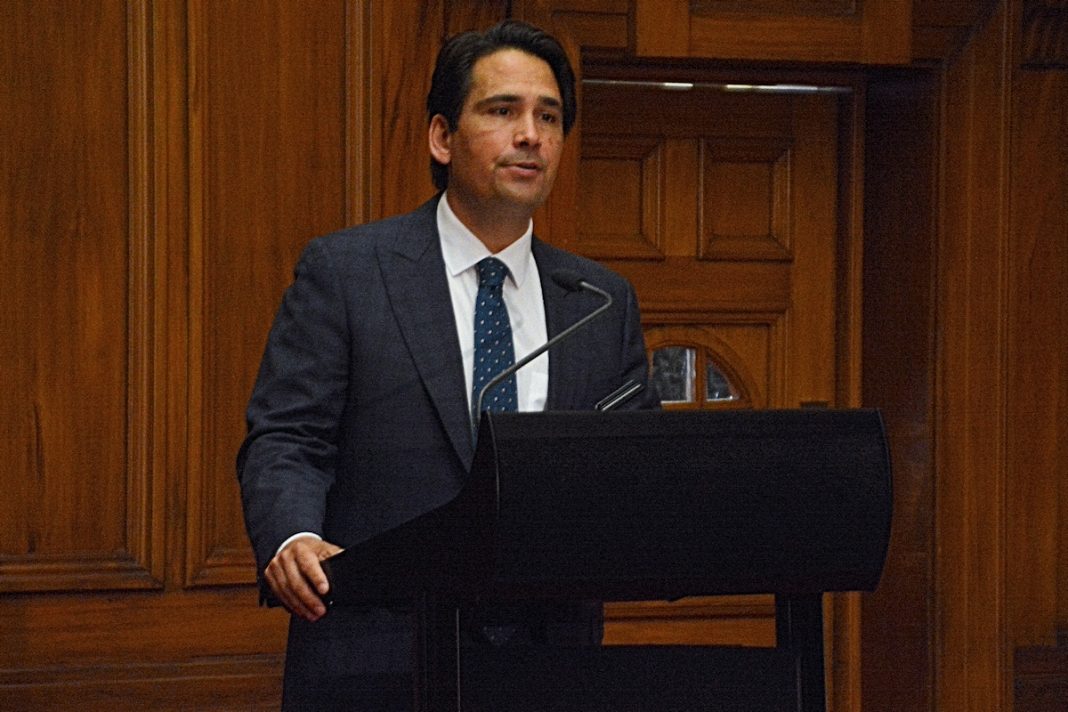 Now that Simon Bridges is National’s finance spokesperson, the future of Reserve Bank Governor Adrian Orr will be an issue.

Orr’s contract as Governor expires in March 2023, outside the three months prior to an election when Governments normally defer significant appointments.

But with the election expected in September that year, a move in March to reappoint him would be bound to be an election-year issue.

If the decision were to be left to ACT and National, Orr would go.

But at the same time, Bridges has to be careful.

The Bank is supposed to be independent, and one of National’s criticisms of Orr is that he has allowed it to become a little less so under Labour and Finance Minister Grant Robertson.

Orr has come under criticism from the right-wing New Zealand Initiative economist, Eric Crampton and from the former Reserve Bank economist and blogger, Michael Reddell.

However, Bridges conceded it would be a big call for a National-Act Government to get rid of some who had been reappointed by the Labour Government.

“Ultimately, he has probably made things worse,” Bridges told the “Working Party” podcast.

“His policy implementation has led to the housing problems; we’ve got the big inflation, and he’s been focused on a whole bunch of other things that may or may not be important.

“But these are not the job of the Reserve Bank, whether it’s Maori issues or climate change and the like.”

Those comments give a clue to the direction that Bridges is likely to take National’s economic policy.

He is, he told POLITIK, “a kind of a free-market guy.”

“Generally speaking, I believe in lower taxes, less red tape and spurring innovation and a more productive country,” he said.

“I don’t know what they are right now.

“But if a bright young economist, the next Milton Friedman or Kenneth Galbraith, come along and have ideas that are relevant to us today and that allow us to reset things and deal with things differently, I’ll be very open to that.

“I’m a collector and a hoarder of new ideas, and I will be  on the lookout for them over the next 12 months or so.”

That is a  very different approach to the one he took when he was leader between 2018 and 2020, where he had Paul Goldsmith as finance spokesperson.

Goldsmith is also from the free market end of the party, but there was little new in his economic policy. It stuck to the fundamental macroeconomics of the Key-English-Joyce era with an emphasis on low taxation and attention to fundamental economic indicators like the debt to GDP ratio.

Post-Covid is going to require a more complex policy response.

National’s new leader, Christopher Luxon, has already signalled that increasing productivity will be a top priority for National.

The issue has been a long-running irritant in New Zealand economic policy formation.

In 2018, the OECD said: “Labour productivity (in New Zealand) has failed to catch up with leading OECD countries, despite generally beneficial policy settings.

“Poor labour productivity can be traced to a lack of international connection and agglomeration, high rates of qualification and skills mismatch, muted competitive pressures, and low rates of capital investment and research and development activity.”

That too impacts on productivity.

But the next National-Act government is also likely to face major challenges on the fiscal front.

The scale of the challenge is easily seen when it is remembered that the 2019 Budget forecast net debt as a percentage of GDP to be 18.7 per cent in 2023 but that now, as a consequence of the COVID borrowing,  that will have nearly tripled to 48 per cent.

To put that in perspective, net debt, as reported in Treasury’s Briefing to the Incoming Government in 1990, was at 51.7 per cent. That led directly to the December 1990 mini-Budget with its benefit cuts, prescription charges and income-related rents for state housing. So acting now or very soon might avoid a repeat of 1990.

The BEFU bases its projections on an assumption that only New Zealand Superannuation and indexed welfare expenditure is assumed to grow.

Treasury argues that if the projections are based on historical averages, expenditure growth (particularly in health) will be larger than that.

The Long Term Fiscal Statement suggests that raising income tax by one per cent by 2025 and not adjusting for fiscal drag would generate enough tax to keep the Budget in surplus up till 2035.

A National-Act government would be unlikely to agree to that.

So what could they do?

“Surpluses aren’t the be-all and end-all of everything,” Bridges told POLITIK.

“But getting back to surplus, all things being equal, is a very good goal indeed.

“And so if I can in pushing arguments about productivity, spending and debt and inflation, bring us back to some rationality and focus on these issues that you’ve got to earn a dollar and you’ve got to spend it wisely, and  it can’t all just be borrow, borrow; I’ll be doing New Zealand a service.”

Bridges’ memoir “National Identity” has no chapters on the economy, taxation or business but does talk about education, which is clearly a passion of his. Perhaps not surprisingly, for someone with a post-graduate degree from Oxford, he believes in educational success.

“As finance spokesperson, I’ll take a real interest in education,” he said.

“If we keep slipping down the league tables, that will see a continuing decline in productivity.

“If we sort it out, then, in the long run, we will go a long way to sorting out productivity.”

In the short term, he is critical of an immigration policy that has made it difficult for skilled workers to come into New Zealand.

“We want to make sure we’re retraining our people into the right skills because part of the problems is a skills mismatch between New Zealanders and what we actually need,” he said.

“It takes time, though, and it will require some reasonable immigration in the meantime.”

None of this is particularly new for the National Party; rather, what is different is the change in emphasis to a focus on societal outcomes rather than economic outputs such as surplus targets.

There are some key players yet to be named in this reconstruction of the party, most particularly the education spokesperson.

But Bridges is likely to be a wide-ranging finance spokesperson with a tendency to range more broadly across policy areas.

That will require a very strong relationship with his leadership rival, Christopher Luxon.

“We are a couple of guys who have known each other quite well for some time now, and there’s a really good rapport there,” he said.

“I think we’re very complementary in our in terms of our experience and skills.

“I think I can bring some intellectual heft and some significant experience in the parliamentary setting and ministerial life.

“And so I think I think that we will work really well together.”

What Luxon and Bridges must hope is that their relationship becomes another enduring double act of party leader and finance spokesperson.

Who is to blame for the Reserve Bank having to raise interest rates?

National caucus to meet today in wake of bad poll