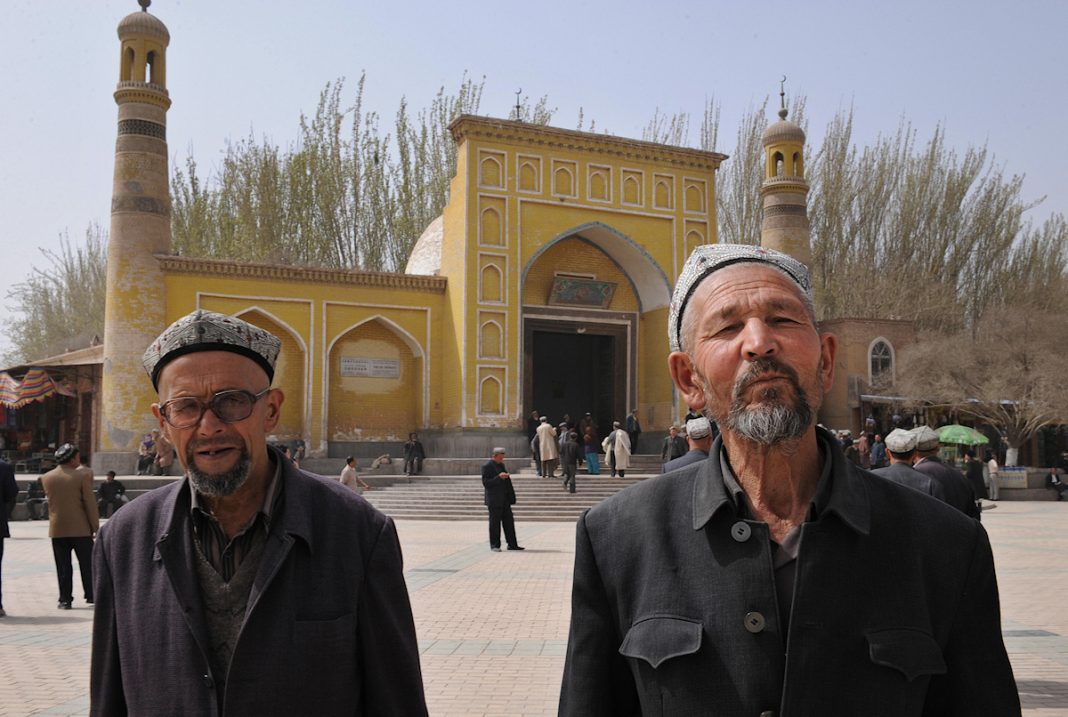 The following article has been contributed by China’s Ambassador to New Zealand, Mme Wu Xi. It is in response to growing international criticism of China’s human rights record in Xinjiang. On March 23, in a joint statement with her Australian counterpart, Foreign Minister Nanaia Mahuta expressed grave concern “about the growing number of credible reports of severe human rights abuses against ethnic Uyghurs and other Muslim minorities in Xinjiang.” She called on China to grant “meaningful and unfettered access to Xinjiang for United Nations experts, and other independent observers.” Mme Wu’s response has not been edited by POLITIK.

China’s Xinjiang Uygur Autonomous Region in the Northwest is a land of beauty, diversity and unity. Fifty-six ethnic groups coexist in a stable society where the economy is growing and living standards are improving. It is a region of flourishing cultural heritage, ethnic unity and harmony and freedom of religious belief, with people of different ethnic groups living and working together in peace and contentment.

Xinjiang-related issues are often framed in terms of human rights, ethnicity and religion by some western politician and media, but the truth is that efforts of the Chinese government are aimed at combating and preventing violent terrorism and separatism. Anti-terrorism and deradicalisation efforts in Xinjiang have been implemented in accordance with the law to protect people’s lives, and have gained the support of people from all ethnic groups. People in the region continue to embrace peace and prosperity, and Xinjiang society continues to develop steadily.

Facts and truthfulness will eventually prevail over lies. Here are ten lies about Xinjiang-related issues versus the truth.

Lie No. 1: Some western politicians have claimed the Chinese government has committed “genocide” against the Uygurs and other ethnic minorities in Xinjiang.

Xinjiang enjoys social stability, with people living and working in peace and contentment. The region has made unprecedented achievements in economic and social development and improvements to people’s livelihoods. From 2014 to 2019, the GDP of Xinjiang increased from 919.59 billion yuan (201.4 billion NZD) to 1.36 trillion yuan (300 billion NZD), with an average annual growth rate of 7.2 percent. The per capita disposable income in Xinjiang increased by an average annual rate of 9.1 percent. Remarkable achievements have been made in poverty alleviation. All 3.09 million impoverished people in Xinjiang have been lifted out of poverty. The absolute poverty problem in Xinjiang has been resolved historically.

Lie No. 2: Xinjiang sets up “re-education camps” to detain millions of Uygur Muslims.

Facts: Xinjiang has never had any so-called “re-education camps.” The vocational education and training centers established in Xinjiang in accordance with the law were education and training institutions in nature and were preventive counter-terrorism and deradicalisation measures taken by Xinjiang. The aim was to eradicate the breeding ground for terrorism and extremism from the source.

The relevant measures drew on the international community’s experience in combating terrorism and deradicalisation and implemented the idea of using development, education, and other resources to curb extremist ideologies, as set out in the UN Plan of Action to Prevent Violent Extremism. It fully complied with the principles and spirit of a series of international counter-terrorism resolutions, including the UN Global Counter-Terrorism Strategy.

Xinjiang’s counter-terrorism and deradicalisation measures have achieved positive results. There have been no violent terrorist cases for over four consecutive years in the region.

The vocational education and training centers offered a curriculum that included standard spoken and written Chinese, understanding of the law and training in vocational skills to achieve the goal of deradicalisation. By October 2019, all trainees at these centers had completed their studies and graduated, and most have found stable jobs and live peaceful lives.

Lie No. 3: Some reports claim Xinjiang has carried out “forced sterilisation” of Uygur women, resulting in a sharp decline in the Uygur population.

Facts: These reports are full of assumptions and data manipulation. The so-called evidence of “forced sterilisation” in the “reports” claims that 80 percent of new intrauterine device (IUD) insertion procedures in China for 2018 were performed in Xinjiang and that the natural population growth rate in Hotan and Kashgar of Xinjiang in 2018 was only 2.58 per 1,000 people. The ‘evidence’ is entirely inconsistent with the facts.

According to data from the China Health Statistics Yearbook 2019, published by the National Health Commission, the number of new IUD insertion procedures in Xinjiang in 2018 accounted for only 8.7 percent of China’s total.

According to the 2019 Xinjiang statistical yearbook released by the statistics bureau of the Xinjiang Uygur Autonomous Region, the natural population growth rates in Kashgar and Hotan were 6.93 per 1,000 people and 2.96 per 1,000 people, respectively, in 2018.

Facts: The vocational education and training centers fully respected and protected trainees’ freedoms of religious belief, ethnic customs and habits, and the right to use their own spoken and written languages. Trainees could decide on their own whether to take part in legal religious activities when they got home; a variety of Muslim food were provided free of charge and the regulations, curriculum, and menus at the centers all used local ethnic languages as well as standard Chinese.

The vocational education and training centers fully guaranteed trainees’ personal freedoms and dignity. They employed a residential education model that allowed trainees to go back home on a regular basis, ask for leave to attend to personal affairs, and enjoy freedom of correspondence. The centers strictly prohibited any form of humiliation or mistreatment. There were no such things as “suppressing ethnic minorities” or “persecuting Muslims.”

Lie No. 5: Some overseas Uygur people have been claiming “their relatives or friends in Xinjiang cannot be contacted and have gone missing” on overseas media and social media platforms.

Facts: Xinjiang protects the freedom of travel of people of all ethnic groups, including the Uygurs, and their communication with overseas relatives according to the law.

Verification with relevant departments shows that some allegedly “missing” people, mentioned by the “East Turkistan” separatists overseas, are living a normal life, while other “missing” incident reports are pure fabrications.

During a UN Human Rights Council session in February 2020, the “World Uygur Congress” organised an activity outside the Palace of Nations in Geneva. They posted pictures of so-called “Uygurs persecuted by the Chinese government.” These pictures were later discredited as disinformation. Those in the pictures are living normal lives. Separatist groups stole their photos and personal information.

Lie No. 6: China systematically transferred 80,000 Uygurs out of Xinjiang and assigned them as “forced labor” to factories in other provinces.

Facts: The government of the Xinjiang Uygur Autonomous Region works with a strong sense of responsibility to promote employment.

Southern Xinjiang was an area with low levels of industrialisation and urbanisation, where many people suffered from poverty due to a lack of job opportunities. Based on this situation, local governments at all levels have taken active measures to help those in need of secure employment. These measures included creating job opportunities nearby, facilitating work in other areas in Xinjiang, or transferring workforces to other provinces and cities partnered to assist Xinjiang. Such measures have helped residents shake off poverty through employment and lead fulfilling lives, while guaranteeing various ethnic groups’ right to labor and employment.

Since 2018, 151,000 people in poverty-stricken families in southern Xinjiang have secured jobs away from their homes. Most worked in other parts of Xinjiang, while about 14,700 worked outside the region with the assistance of fellow villagers and relatives, or through human resources agencies. Those who work outside Xinjiang have their rights to customs, language and culture, and religious beliefs fully guaranteed. Many earn an annual income, several times higher than the income from farming or working in their hometowns.

Lie No. 7: Xinjiang suppresses ethnic minorities under the pretext of fighting terrorism.

In the face of a complicated counter-terrorism situation and the demands from people of all ethnic groups to stop terrorism, Xinjiang has taken a series of active measures.

Responding to the United Nations Global Counter-Terrorism Strategy and other counter-terrorism resolutions, Xinjiang has upheld the principle of not linking terrorism with any particular region, ethnic group, or religion. It has acted within the law to crack down on violence and terrorist activities that violate human rights, endanger public security, undermine ethnic unity, and aim to separate the country.

Since 2014, a total of 1,588 violent and terrorist groups have been defeated, 12,995 violent terrorists arrested, and 2,052 explosive devices seized. These operations have effectively curbed the growth of extremism, significantly improved public security, protected the right to life, health and development, and other basic rights of people of all ethnic groups. Xinjiang has reported no violent terrorist cases for more than four consecutive years.

Facts: In accordance with the law, Xinjiang has installed cameras in urban and rural public areas, major roads, transportation hubs and other public places in order to improve social governance and effectively prevent and crack down on crime. These measures have enhanced social security and gained widespread support from people of all ethnic groups. The measures do not target any particular ethnic group.

The use of modern scientific and technological products and big data to improve social governance is a common practice in the international community. According to the South China Morning Post, a new study found that Britain, Germany, France and the Netherlands are among the top 10 countries in the world for the number of surveillance cameras.

Lie No. 9: The Chinese government bans foreign journalists from going to Xinjiang for reporting and the United Nations (UN) High Commissioner for Human Rights will be restricted from visiting Xinjiang.

Facts: Xinjiang’s door to the world is always open. Foreign journalists are allowed to report in Xinjiang as long as they abide by Chinese laws and go through relevant procedures, according to the Regulations of the People’s Republic of China on News Coverage by Permanent Offices of Foreign Media Organizations and Foreign Journalists. There are no circumstances in which the Chinese government forbids foreign journalists to report in Xinjiang.

Since the end of 2018, more than 1,200 people from over 100 countries and regions, including officials from international organisations, diplomats, journalists and religious leaders, have visited Xinjiang. From September 3 to 7, 2019, NBC reporters went to Xinjiang for reporting. In December 2020, BBC reporters went to Kuqa County and other places in Xinjiang for reporting.

China welcomes the UN High Commissioner for Human Rights Michelle Bachelet to visit China and the Xinjiang Uygur Autonomous Region, and has always maintained close communication with the UN. We welcome any unbiased foreigners to visit Xinjiang, but firmly oppose any so-called “investigation” and “accountability” with presumption of guilt.

Lie No. 10: Xinjiang suppresses Islam and freedom of religious belief.

Xinjiang has translated and published classic Islamic books and texts, such as the Koran and Selections from Al-Sahih Muhammad Ibn-Ismail al-Bukhari, in Mandarin Chinese, the Uygur, Kazak and Kirgiz languages, providing convenience for religious believers of all ethnic groups to acquire religious knowledge.

Since 1996, the Xinjiang Uygur Autonomous Region government has organised for local Muslims to take charter flights for pilgrimage every year, except for cancellations due to the COVID-19 pandemic in 2020, and has provided high-quality services in entry and exit, medical care, catering and more to ensure safe and orderly pilgrimage activities and ensure that local Muslims of all ethnic groups can successfully complete their pilgrimage.