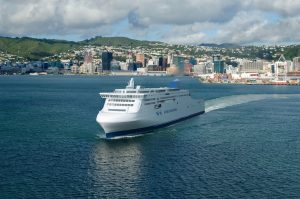 Helen Baxter used to be one of the “flower ladies” – a group of keen Picton locals who would welcome cruise ship passengers to the port-side town.

Baxter, along with fellow flower ladies Margaret Frisken and Yvonne Rigby, attended a drop-in session at the Picton Library last Thursday, to learn more about the Picton Ferry terminal upgrade.

On a large screen, people were able to view a 3-D digital walk-through of the new ferry precinct, which would be upgraded to make way for larger Interislander ferries.

Asked why she attended, Rigby said it was her first chance to properly understand more about the project.

“I feel quite comfortable with the project,” Baxter said.

“We’ve heard a lot about it, but to see certain things like this [walk-through], it’s even better than I thought.”

The “flower ladies” attended one of the two drop-ins held in Picton last week, designed to give residents the chance to speak to those directly involved in the project. A community business meeting was also held on Wednesday night.

The project was a collaboration between Port Marlborough, the Marlborough District Council, KiwiRail and Waka Kotahi NZ Transport Agency. The first ferry was expected to arrive in New Zealand, from Korea, by 2025.

Inter-island Resilient Connection (iReX) Project programme director Stephen O’Keefe said they were in the process with the shipyard in selecting the “major components” for the ferries.

This included things like the battery packs, as the ferries would be hybrid, fin stabilisers, and bow thrusters, O’Keefe said.

They anticipated they would start approving “technical designs” for the ferries in July.

Other than the Marlborough District Council’s consultation on the $110 million Picton ferry precinct loan to Port Marlborough, O’Keefe said it was the first opportunity for the public to meet with those involved with the project face-to-face.

“We had to revisit the design to get it right, which we did early part of last year, into the middle of the year,” he said.

He thought most questions asked by the community had been in relation to traffic management.

Following Wednesday night’s business meeting, specific “themes” had emerged, including how the community could capitalise on the terminal upgrade and construction.

“We said it before, this is an incredible opportunity, it’s a significant investment that will impact Picton and Blenheim from an economic point of view, as an opportunity,” O’Keefe said.

“We’ll probably look to have some smaller workshops and things like that to see how we capture that opportunity.”

Port Marlborough chief executive Rhys Welbourn said given the emphasis made on the sustainability aspects of the project – like the promise of greener ferries – a lot of interest from the community had been on this.

He said Port Marlborough was currently working with KiwiRail on the contractual side of things.

“This is a very long lease licence, it’s 60 years, so we’re spending a lot of time making sure we get that lease right,” Welbourn said.

He said he was pleased to meet with the community, so soon after the council funding consultation.

“We said we will keep coming back and communicating.”

​
“We’ve had a lot of Covid interruptions and we’ve had to be a little bit innovative about how we do the consultations, but it’s a lot nicer to be able to work face-to-face.”

KiwiRail last year signed a kawenata (agreement) with Te Ātiawa, which recognised a partnership with “a shared view to exploring mutually beneficial and collaborative opportunity”. The agreement was a first of its kind for KiwiRail.

“We’ve formed a great relationship and partnership with them,” Riwaka said.

“It’s about keeping that communication going, and taking the people along for the journey.”

Port Marlborough project manager Kate Cushing said the project was particularly exciting for her as a “bit of a greeny”.

“I really like the sustainability side. Not only the ships, with the hybrid and the batteries and using shore power to charge the batteries.

“But also with the rest of the terminal, as well, we’re looking for sustainable construction in the materials that we use.”

​​More information about this project can be found by visiting www.irex.co.nz.