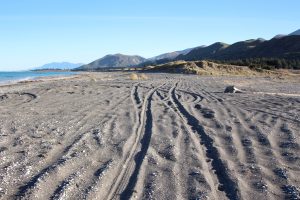 Tangata whenua exercising their customary right should be exempt from a vehicle ban on Marlborough’s east coast, a top of the south iwi says.

Te Rūnanga a Rangitāne o Wairau believes a proposed blanket ban on all vehicles on the coast would unlawfully restrict iwi from accessing its customary fisheries and sites of significance.

Hearings for the proposed east coast vehicle bylaw reconvened this month, to allow submitters to talk to “new material” that had been provided since submissions had closed.

The Marlborough District Council first agreed in 2019 to draw-up a bylaw banning drivers from a 45-kilometre stretch of coast, from the Awatere River mouth to the Ure River mouth.

The proposed bylaw was released for public consultation in June last year after a year-long debate between those who thought vehicles damaged the coast, and those who thought most quad bikers were eco-conscious.

The council said its aim was to improve public safety, and enable habitat restoration and protection of the area’s many threatened and at-risk species.

The area had long been popular with quad bikers and the like, with access to it becoming easier after the 2016 Kaikōura earthquake exposed flat platforms of reef, which used to be underwater.

They reconvened this month to hear further submissions from Te Rūnanga a Rangitāne o Wairau, representatives of Burkhart Fisheries, the East Coast Protection Group and the Department of Conservation.

Of the 191 submissions, 58% of submitters supported the council’s draft bylaw proposals, while 39% opposed them, and 3% were neutral.

In reconvening for hearings, commissioner Enright said the panel had undertaken a site visit from a point just below Cape Campbell near the lighthouse, through to Ward Beach.

He said the panel was still considering whether they needed another site visit.

In its original submission, Rangitāne o Wairau called for the council to scrap the “unlawful” bylaw and start again, saying it would prevent them from using vehicles, such as quad bikes, to exercise their customary right to fish.

It said that they had harvested food from the beach’s waters for centuries, dating back to New Zealand’s earliest inhabitants, who moved south from Te Pokohiwi o Kupe/the Wairau Bar.

“It is unreasonable to expect whānau (many of whom have physical limitations) to safely and comfortably access the area, which would require them to walk along the beach to access Te Karaka and beyond to undertake customary practices, including cultural harvesting,” the submission said.

As “relief” for the flawed process, the iwi said the bylaw should consider physical barriers preventing vehicles larger than a quad bike to access the area, or enable vehicles smaller than 4×4 utilities and cars to access the area.

Rangitāne maintained their position at the latest hearing, saying they took issue with the council’s processes to date, and rejected claims that all iwi had been engaged with equally through the process. The iwi had since called in a further submission for the bylaw to allow for vehicle access if someone was undertaking customary practices.

In the hearing, commissioner Enright asked Rangitāne o Wairau general manager Corey Hebberd whether the iwi was standing by their first submission, or their second – that the bylaw should not apply to those exercising their customary rights.

He asked if Rangitāne would be willing to consider, as a “scenario”, a quad bike option below high tide.

Hebberd maintained that the iwi were suggesting the adopted bylaw excluded people who were exercising their customary rights as tangata whenua of the area.

“We’ve made it really clear from the outset that we think the process has misfired, that it has not involved us, that it has given preference to one iwi relative to others … we’ve set out how we think that can be resolved,” Hebberd said.

Lawyer Miriam Radich said on behalf of the iwi it was clear the council had treated Ngāi Tahu as having superior status over the area compared to Rangitāne.

“There has to become a point, where excuse the pun, a line in the sand is drawn. Because this process has been going on for years, and Rangitāne has consistently said we want to be heard, we want to talk, we want to engage,” Radich said.

She said the bylaw process had caused a lot of “hurt and anguish”.

A Marlborough District Council spokesperson said on May 16 the panel was aiming to issue its bylaw recommendations by June 20.

The spokesperson said the earliest the council would discuss these recommendations would be at a planning and finance meeting set down for July 28, which meant it could be moved to full council for adoption on August 11.