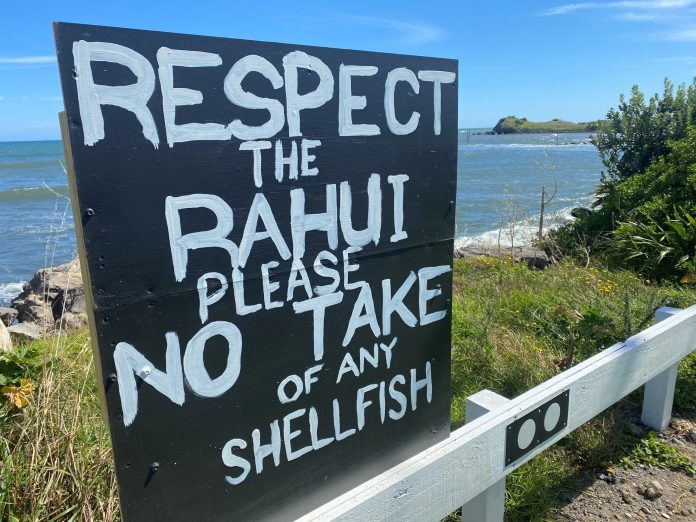 Ngāruahine iwi is considering adding its coastline to a rāhui on collecting shellfish, which would see a customary ban from New Plymouth to Hāwera.

Along with Taranaki iwi, Ngāruahine also is looking to the Minister of Fisheries to legally ban kaimoana gathering for at least two years, to reinforce the rāhui.

Hapū of Taranaki iwi have already placed a rāhui from Paritutu in New Plymouth to just south of Ōpunakē, except for a small gap north of Wārea where Ngā Mahanga are still finalising their response.

If Ngāruahine join them the rāhui would stretch along 100 kilometres of the coast to protect pāua and other kaimoana from excessive harvesting, largely by visitors to the region.

The Taranaki hapū are already preparing their application to the minister under section 186 of the Fisheries Act, which provides for a legal ban on collection for two years, with the possibility of renewal.

The pouuruhi taiao (environment lead) at the governance entity Te Korowai o Ngāruahine, Dion Luke, said kaumātua in January supported a rāhui in principle but were yet to fully agree on an iwi-wide ban.

Luke said a rāhui from Taungātara Stream to Waihi Stream also would need support from neighbouring Ngāti Ruanui, which had a shared interest in the area from the Waingōngōro River to Waihi Stream.

He said if agreement was reached, Ngāruahine would be well placed to immediately request a section 186 closure.

Luke told Taranaki Regional Council’s Policy and Planning committee that some people had ignored previous rāhui, and a section 186 ban would allow the rāhui to be legally enforceable.

“Rāhui signs are regularly removed, smashed or thrown into nearby hedges.”

“Kaumātua are becoming very concerned that rangatahi are now looking at taking matters into their own hands – they’ve becoming increasingly frustrated.”

Luke said there was general support across five of the six Ngāruahine hapū, and most of the opposition was based on lack of evidence or reliable data.

“Kaumatua have so far provided anecdotal and intuitive evidence.”

“If we are to proceed to the minister we must do it together with all six hapū.”

Hapū would meet next month to continue discussions.

Increasing carloads and even busloads of visitors have been taking pāua and other shellfish from the Taranaki coast since late 2020.

Taranaki iwi’s rāhui coordinator Fran Davey told the TRC committee that numbers had decreased since the rāhui began in January, but even last weekend they were still arriving.

“A lot of the visitors are from Auckland, of a different ethnicity, and very rude and very unapproachable.”

Davey said locals tried to educate on the lore behind the rāhui, but the gatherers were able to say their collecting was legally permitted.

“This is how the Chinese are interpreting it: ‘It’s not illegal what we’re doing because MPI is not supporting it.’”

She asked the TRC to stand with hapū on the Fisheries Act application.

“We’re requesting your support when the public submissions are made available during that process, to support this kaupapa.”

Committee member Bonita Bigham said TRC should take an active approach and send a representative when iwi and hapū go to meet the minister.

“It helps bolster the case, rather than waiting for the formal submission process when we just become another submission that gets thrown away.”

TRC’s resource management director Fred McLay said it would be difficult to extend monitoring from the current mid-shore surveys.

“We do have expertise around monitoring, as do kaitiaki, and there’s an offer there to continue a discussion around that, so that’s something we can look at but it’s not an easy solution… to extend the surveys into deeper water.”

“There is no clear business case for pursuing this approach at this time.”

He said the Fisheries Act was the right law to manage kaimoana, and Coastal Plan changes could “ultimately take decision-making and self-determination out of the hands of iwi.”

“We’ve just been through very, very long process in terms of getting to where we’re at with the Coastal Plan – we’re wanting to get that in and operable.”