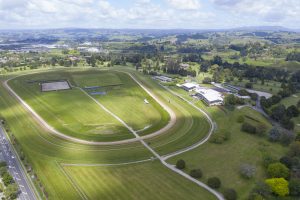 The future of Tauranga’s racecourse is once again out for public consultation, but council’s preferred option could trigger a Treaty of Waitangi claim.
The Tauranga City Council led Greerton Maarawaewae Study has been looking at future options for the Greerton Racecourse Reserve.
Racing Tauranga, Tauranga Equestrian Sports Association and the Tauranga Golf Club occupy the 85 hectares of crown reserve land and have leases that expire in 2039.
The council is consulting on three options: Option A includes a health precinct, sports fields and the golf course – this is the council’s preferred option.
Option B is a large central park with sports fields, community spaces and connection to Kopurererua Valley, the golf course would remain but the racecourse and equestrian facilities would be relocated.
Option C is an enhanced status quo with the current users remaining but sports fields and connection to Kopurererua Valley added.
Ngāi Tamarāwaho hapū representative Buddy Mikaere told Local Democracy Reporting the hapū’s preference is Option C and that a change in the reserve’s status would trigger a treaty claim.
Mana whenua, Ngāi Tamarāwaho hapū representatives lodged a claim via the Treaty of Waitangi Act in February.
The land was confiscated after the Battle of Gate Pa in 1865 and because it was being used for public good, the hapū didn’t pursue it as part of their treaty settlement, said Mikaere.
He said if the land were to be used for health services that would mean breaking the current lease the racecourse holds.
“That is going to involve some legislation, but whatever form that takes it is a change in status and so will trigger our claim. So [we] might as well have the land back.”
The council was advised in November 2021 that Te Whatu Ora/Health New Zealand was interested in using the reserve land as a site for potential health services.

Chief Executive of Hauora a Toi Bay of Plenty Pete Chandler said: “A growing Bay of Plenty population and a need to respond to significant seismic issues on the current hospital campus means we need to explore opportunities for future-proofing our current health facilities and services”. This may require expansion of the current services he said.

“Identifying a new public hospital location and providing better transport access to serve the growing Tauranga and Western Bay area would ensure that planning for the future of the health system is not constrained to the current site,” said Chandler.

He added that locating a new public hospital on the reserve land could also potentially open up the current hospital campus site for medium to high density housing in the long term.
Until June, having housing on the racecourse reserve was an option, but the commissioners decided to remove all options for housing from the land on the advice of council staff.
Housing would have also triggered a treaty claim from Ngāi Tamarāwaho, said Mikaere.
Commission chair Anne Tolley told Local Democracy Reporting the hapū were “very generous” not to pursue the racecourse reserve in their treaty settlement.
When asked if threat of a treaty claim was a large part of removing housing as an option, Tolley replied: “No, because they’re quite entitled to do that”.
“We certainly understood their thinking.
“They were in tune with the community that this should be about recreation. This space should be about open space, green space and recreation,” she said.
“That was a very clear message we got from the community that it shouldn’t be built over.”
This is the third round of community engagement in the Greerton Maarawaewae Study that was launched in October 2021 to decide the best potential use for the land to meet the city’s needs as it grows.
The latest three options were decided on by the commissioners in June and have been whittled down from 10 using public feedback and multi assessment criteria that weighted the strategic needs of Tauranga.
Public submissions on the options can be made from July 27 until August 29.
In November, submissions will be heard by the commissioners at hearings, with a decision on the future use of the reserve land earmarked for December.